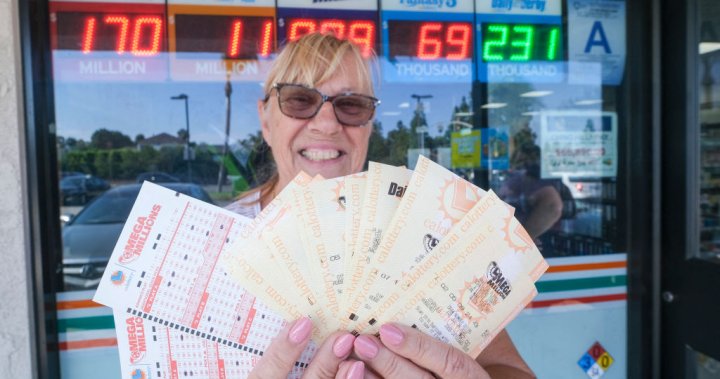 The historic US$1.1 billion (around $1.4 billion) Mega Millions jackpot is just around the corner but Canadians can do much more than just watch from the sidelines.

Though the Mega Millions lottery is based in the United States, there’s nothing stopping Canadians from taking their shot at the third-largest jackpot in U.S. history.

The next draw is Friday night at 11 p.m. EDT and participants have up until about an hour before the draw time to purchase tickets. Anyone who hoped to buy a ticket but won’t have the time need not fret though! There’s a chance that no one will win the jackpot tonight.

The Mega Millions prize has swelled to its current height because it has been more than three months — a whopping 29 consecutive draws — since anyone has matched the requisite six numbers to snag the prize money.

The odds of winning are a staggering 1 in 302.5 million, according to The Associated Press.

So how can Canadians join in on the fun?

For those who live close to the border, the simplest way to purchase a Mega Millions lottery ticket is just by driving down south. Tickets can be purchased in 45 states, Washington D.C., and the U.S. Virgin Islands.

The only states where you can’t buy tickets are Nevada, Utah, Alabama, Hawaii and Alaska (which is a bummer for people in northern B.C. and Yukon).

In fact, all foreign tourists to the U.S. are eligible to buy Mega Millions tickets, not just Canadians.

A similar tactic that Canadians can use if they don’t want to travel to the U.S. is asking a friend or family member in America to buy a ticket on their behalf — provided they trust them not to run off with the winnings!

If those two options are out of the question, there’s one more way Canadians can score a ticket.

There are a number of third-party services that will buy lottery tickets for a fee, and they’ve been shown to work in the past.

In 2015, a man from Iraq won $6.4 million from an Oregon lottery using an online agent The Lotter.

Mega Millions doesn’t endorse using these companies and writes on its site, “if you choose to do business with one of these companies, you do so at your own risk.”

For the lucky person who wins, Mega Millions says winnings must be claimed from the same state where the ticket was purchased — but the lottery does give the option of claiming the prize through the mail.

The jackpot is subject to a 30 per cent tax from the U.S. government and there may be a state tax added on top of that depending on where the ticket was bought.