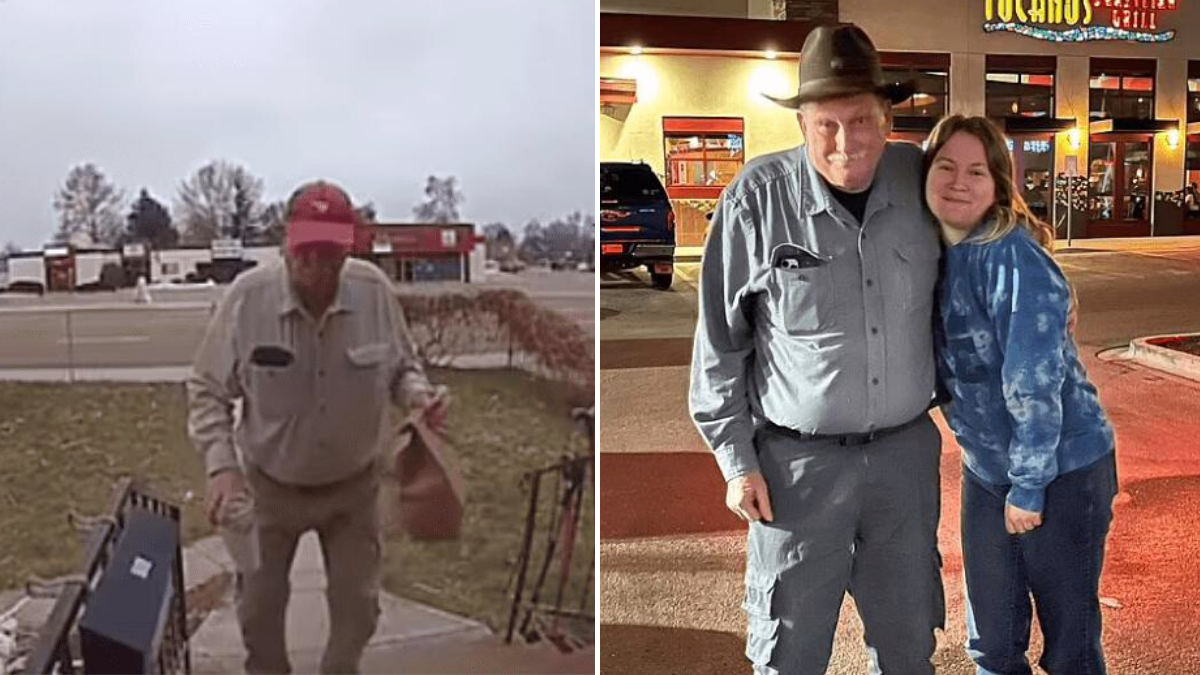 When most of us think of hitting age 70, we are motivated by dreams of being retired and enjoying the fruits of our labor. Unfortunately, not all of us are so lucky.

For one elderly man in Idaho, his 70s meant still hustling and working two jobs to make ends meet- until one customer changed everything.

Anabelle Grace Stephens, 21, captured footage of an elderly DoorDash delivery person through her doorbell camera. She posted it on TikTok, where it ended up going viral, getting 10 million views and almost 20,000 comments.

Commenters were heartbroken, writing: “This makes me so, so sad. I get all emotional when I see the elderly working to survive.”

I wish people that age didn’t have to worry about continuing to work the rest of their lives.

Anabelle decided to create a GoFundMe page for the driver after seeing the amazing response to her video. She was able to track the driver down; and found out the 71-year-old’s name is Kerry Judd. Anabelle uncovered that not only was he still working as a delivery driver, he was also working a second job in security.

It isn’t easy with DoorDash basic pay of $2.50 per delivery. DoorDash fees are expensive so people don’t always tip because times are tough and there are times they are not able to go out so they order DoorDash.

Kerry had lost his wife ten years ago, and was in a position where he still had to support two of his sons. After posting the GoFundMe page, Anabelle was excited when she saw that she had raised $84,000 after only five days. Now, the GoFundMe has raised over $100,000.

“As you can see, Kerry really is a hard-working guy who is working two jobs, trying to make ends meet, and is still raising older children. We spoke for a while and there is so much more to his story but he is private and just wanted this to be put out in the world,” Anabelle wrote.

He is funny and sweet and thinks he used to take one of his kids to a babysitter at the house I live in- small world. Let’s help this man quit at least one of his jobs!

Anabelle’s amazing actions helped give Kerry some relief and relaxation without putting his family’s welfare at risk. She could have capitalized on the TikTok fame for herself, but instead she chose to use her platform for good. Not only that, but she encouraged her community to do good right alongside her.

TREAT OTHERS WITH EMPATHY

You never know the impact you can have on others.

Haute couture goes ‘surreal’ and upside-down at Paris fashion show
I Have 2 Questions For You (Motivational Video) Fearless Motivation
The two kinds of productivity advice
Femcels: Inside the enigmatic subculture of involuntary celibate women
Deliveryman Arrives to Pick Up an Order From a Bakery – Breaks Down When He Finds Out Why His Own Name Is on the Package