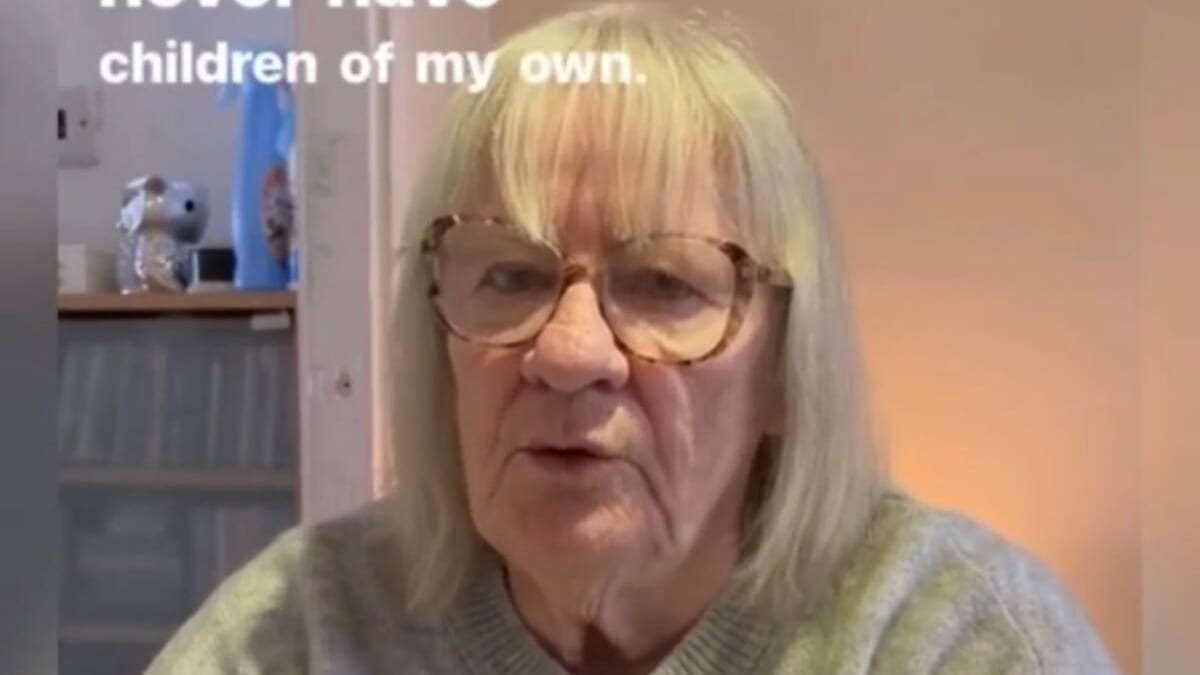 Rosalinda was in her early 20s when, after lots of medical investigations, she was told that she would never have children. But she would end up having a few children anyway.

They just came into her life in ways she had not imagined.

How One Woman Unexpectedly Became a Mother

The mom from South of England, now in her 70s, has taken to TikTok to share stories from her life. With a life filled with so many ups, downs and shocking events, it’s no surprise she has amassed a following of over 84,000 people with only 21 posts so far.

In a video on TikTok, Rosalinda shared that in her 20s her next-door neighbor asked her to look after her little boy while she went shopping, but she never came back.

“That little boy stayed with me through my marriage that I’ve spoken about before, until he was 18 when he found his dad and left to start a new life with his father – and maybe his mother, I’m not sure,” she explains in the TikTok video.

Her marriage ended quickly when she caught her husband in bed with her sister who was staying with them after her going separate ways with her own husband. But that didn’t stop Rosalinda from wanting to build a family.

Inspired by raising her neighbor’s son as her own, Rosalinda decided to become a foster parent. Her first foster child was a little boy named Adeola.

“Over the years I’ve fostered many children and that led up to me getting my daughter,” she says in the TikTok video.

How Fostering Led One Woman to Her Adopted Daughter

In 1990, Rosalinda adopted Lola who she describes as “such a beautiful little baby” with “really beautiful eyes.”

Lola is now 30 years old, and sometimes appears in some of Rosalinda’s TikTok videos.

In one TikTok video, where the mother and daughter duo are pretending that Lola is only now finding out she is adopted, Rosalinda says she “fought long and hard” for her.

The video where Rosalinda shares her journey of raising her neighbor’s son, fostering many children and adopting her daughter received 1.8 million views. But it also attracted a lot of press and negative comments calling the child ungrateful.

When Rosalinda was asked for more details about the neighbour’s little boy in the comments, she confirmed they were not in contact.

“He left when he was 18 and aside from phone call I never heard from him again,” she said alongside a sad face.

Rosalinda stayed away from TikTok for seven months before posting an update video.

She apologizes for her absence and explains that she was overwhelmed by the negative comments about the child, who she calls George.

“That young man should be ashamed of himself,” and “You raised him and he just left like that. Awful,” are two of the comments that pop up on the screen in her video as she explains.

“I got so many negative comments about George, and I really didn’t want him portrayed in that light. He was my boy and I loved him,” she says in the video.

How TikTok Reconnected a Mom With Her Boy

But, she explains, some good came out of it. Some extended family found him, and George is back in her life.

“I talk to him every day, every day. And I’m learning all about his life, his son’s life. And it’s just good. He phones me every week and we talk every day through Messenger. And I am so pleased to have him back in my life,” she says.

At the end of the video she says she’s back to chronicle more of her life.

“So now I’m back to continue my story with my wonderful daughter and our life together. Maybe a little few things in between about my life,” she says.

RELATED: Foster Mom Fights To Adopt Baby No One Wanted – 20 Years Later, He Goes Behind Her Back And Does This

One of her most recent TikTok videos taken on her birthday is a video of her receiving some more surprising news.

She presses the stomach of a stuffed bunny as she was instructed and hears what sounds like the heartbeat from an ultrasound. But she is confused and a voice on the video says “I’ve never heard this sound before.”

She opens the card that came with the gift and starts tearing in disbelief.

Rosalinda shows us it’s not DNA that makes a family. The mom and foster mom is now also going to be a grandma and we can’t wait for the sweet baby to make their first appearance on grandma’s TikTok at @mamarosalinda.

61-Year-Old Accidentally Leaves Her Wallet at a Walmart Parking Lot – One Teen Drives Miles Just to Return It to Her
Must-See Motivation Speech: How to Find True Happiness From the REAL Jerry Maguire (VIDEO)
Garmin Canada announces Alberta expansion despite other tech turmoil
In Honor of Groundhog Day: 5 Hilarious Times Bill Murray Made Someone’s Day a Little Extra
A More Colorful Approach to Meditation—Creating Your Way to Peace