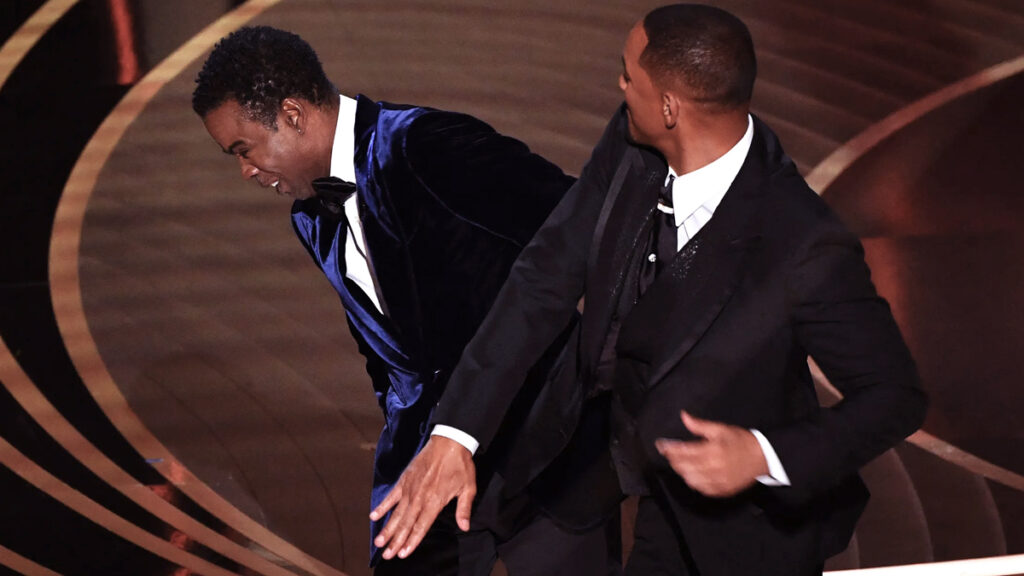 Four months after the “slap heard around the world,” inflicted on comedian Chris Rock by actor Will Smith at the 94th Academy Awards, Rock has made his first notable remarks on the now-infamous incident.

Perhaps “jokes” is a more appropriate description than “remarks” as Rock’s comments were delivered during a recent performance he gave at the PNC Bank Arts Center in Holmdel, New Jersey, where he was headlining a show alongside fellow comic Kevin Hart.

RELATED: Chris Rock Reveals The Surprising Reason He Does 7 Hours Of Therapy A Week

“Anyone who says words hurt has never been punched in the face,” said Rock, that night.

Wasting no time, Smith has already responded in his own ‘apology’ video, posting the video across his YouTube, Instagram, and Facebook channels, letting Rock know, “My behavior was unacceptable, and I’m here whenever you’re ready to talk.”

What did Chris Rock Say About the Will Smith Slap?

Back on March 27, Oscar night, the Emmy and Grammy-Award-winning Rock was presenting the award for Best Documentary when he made a questionable joke referencing Smith’s wife Jada Pinkett Smith’s bald head, seemingly unaware that she suffers from alopecia. This prompted Smith to walk onto the stage from his front-row seat and slap Rock sharply across the face.

“Keep my wife’s name out of your f***** mouth!,” the Hitch star yelled at Rock from his seat, his words muted by network censors for viewers at home, as the theater went silent and the stunned attendees wondered if they had just witnessed a staged routine or an actual assault.

To his credit and professionalism, Rock maintained his composure as the live broadcast continued, dazedly stating that everyone had just witnessed, “the greatest night in the history of television.”

Rock remained essentially quiet during those first post-slap weeks, avoiding the media blitz and allowing the Academy to deal with the situation that Smith began when he rose out of his chair, took to the stage, and accosted Rock.

According to the NYPost, during his latest show, Rock finally opened up in more detail, “I’m not a victim,” he added several minutes later during a bit about people being overly sensitive. “Yeah, that s*** hurt, motherf*****. But I shook that sh** off and went to work the next day. I don’t go to the hospital for a paper cut.”

What Rock had to say was clever and confident. Raucous. And funny.

Clearly, Chris Rock has moved past the more reactive and possibly harmful effects of The Slap.

What Has Will Smith Said About the Slap?

In Will Smith’s latest apology video, Smith says he’s been “doing a lot of thinking and personal work” about the incident.

“I’ve reached out to Chris and the message that came back is that he’s not ready to talk, and when he is he will reach out,” Will said. “So I will say to you, Chris, I apologize to you. My behavior was unacceptable, and I’m here whenever you’re ready to talk.”

Smith also took the time to apologize to Rock’s family and “all of the other people he hurt.”

RELATED: Jada Pinkett Smith Reveals Her Take on Will Smith’s Oscars Slap – And It’s Not What You Think

Approximately 40 minutes after the March Academy Awards show, in an it-can-only-happen-in-Hollywood moment of irony, Smith returned to the stage to accept the Best Actor Award for his performance in King Richard. The statuette was presented by Samuel L. Jackson, Uma Thurman and John Travolta, a reunited trio of stars from 1994’s Pulp Fiction.

Smith acknowledged the award with a tearful speech and apologized to the Academy and his fellow nominees for the incident, but not to Rock.

The fallout from The Slap incident began the next day, with Smith issuing an apology to the public and Chris Rock Rock via an Instagram post for his “unacceptable and inexcusable” behavior and actions.

“I would like to publicly apologize to you, Chris. I was out of line and I was wrong. I am embarrassed and my actions were not indicative of the man I want to be. There is no place for violence in a world of love and kindness,” Smith wrote.

Several days later, on Friday, April 1, Smith announced in a statement that he resigned from the Academy of Motion Pictures Arts & Sciences (AMPAS). Then a week after that, the Academy announced that Smith would be barred from all Academy events or programs, including the annual awards ceremony, for a period of 10 years.

The Aftermath of When Will Smith Slapped Chris Rock

In the following months, Rock made only a handful of slight, joking references to the Oscar night incident, the first only three days later at a scheduled performance at Boston’s Wilbur Theater on part of the opening night of his Ego Death World Tour. The show marked his first public appearance following the assault.

Greeted by the audience with a standing ovation that lasted several minutes, Rock immediately quipped, “How was your weekend?” to a warm and laughing response

“I don’t have a bunch of sh** about what happened, so if you came to hear that, I had, like, a whole show I wrote before this weekend,” he continued. “And I’m still kind of processing what happened, so at some point I’ll talk about that sh**.

RELATED: Why Eminem’s Long-Awaited Apology To Rihanna About Her Assault Still Matters

“And it’ll be serious and it’ll be funny, but right now, I’m going to tell some jokes.”

Rock was a little more explicit the next month at a performance at London’s Royal Albert Hall.

“I got most of my hearing back,” he quipped.

“Don’t expect me to talk about the bullsh**. I’ll talk about it at some point—on Netflix,” he promised. “Your tickets were expensive, but not that expensive.”

Is Will Smith’s Latest Video Apology to Chris Rock Effective?

Four months on, with The Slap slipping into the past even as it became a permanent addition in all the world’s Oscar highlights montages, Rock appears to have let time, distance and perspective dictate his actions and reactions. While the effect of the incident on Smith’s career is still undetermined, with a number of his projects put on the back burner for the time being, Rock has seemingly put any feelings of anger and discontent behind him as he continues his nationwide comedy tour and enjoys a new romance with the actress Lake Bell. (The pair reportedly began dating in late June.)

RELATED: The Power of an Apology: Why Love Means Saying “I’m Sorry”

Rock will undoubtedly be on the promotional circuit when the films roll out, which translates into talk shows, interviews, profiles, and, in this case, a look back on the past year. In other words, further opportunities to refer to the ugly incident as something from the past and one that isn’t playing a role in his life today, save as a potential bit in one of his routines.

We could all take something away from Rock’s reaction following The Slap. We can remind ourselves that life unfolds in unpredictable ways and that we have no control over the inevitable bad times, even when they get under our skin and potentially do some damage. The best we can do is let it all play out and put it in the context of the long game. By allowing some time to go by, giving it some perspective, and simply moving on, any collateral damage or frustration we’re feeling can be reconsidered—and then left in the past.

We can let it go. And then make a joke.

What Will Smith’s Oscars Slap Reveals about Anger, Patience and Responsibility

Must-See Motivation Speech: How to Find True Happiness From the REAL Jerry Maguire (VIDEO)
Stranger Body Shames 17-Year-Old Girl in Public – But She Refuses to Stay Silent About It
How I Stopped Feeling Embarrassed and Ashamed of Being Single
A More Colorful Approach to Meditation—Creating Your Way to Peace
Garmin Canada announces Alberta expansion despite other tech turmoil