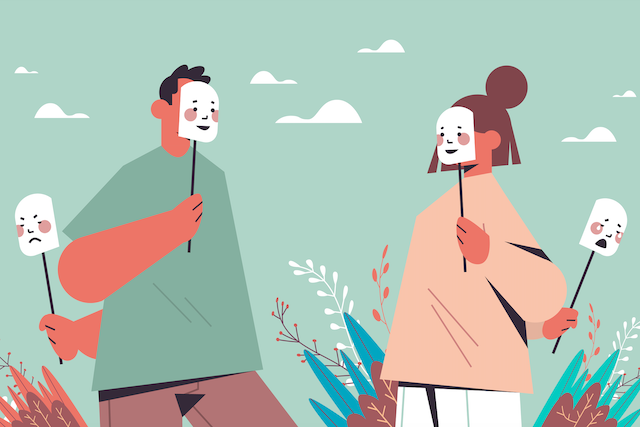 I’m not perfect. Not that this would come as any kind of surprise to anyone who knows me. But I often feel pushed in the direction of trying to represent myself as someone who has it all together. Especially because of the nature of my work as a coach and facilitator. What about you? Do you ever feel like you’re putting on a show for others?

The more I find myself trying to represent a perfectly put-together person, the less confident I feel in who I am because I know I am being inauthentic. It’s a big part of what took me off social media a few years ago.

I don’t like that social media has the ability to mold what you think about yourself by way of comparison and encourage posturing. It’s a slippery slope, as we’re hardwired to yearn for love and connection as part of our survival. For me, it didn’t feel like the kinda place I wanted my love and connection to come from.

Having the ability to talk about our flaws, what’s going wrong in our lives and where we’re getting stuck, is a huge part of human evolution that we often forget about. If we don’t have an environment to talk about our vulnerabilities, the wounds never get a chance to heal.

Before getting into therapy, my life was a bloody mess because I pretended like these wounds didn’t exist.

I don’t remember a period in my life without depression. Even as a teen it followed me around like a shadow.

I believed the world would be better without me. I felt worthless—like I shouldn’t even have a seat at the table with other humans. I should have been in an alley eating scraps of food with sewer rats. No matter what I did or how hard I tried, the shadow mocked me for dreaming of a better future. My unwillingness to unpack those thoughts meant the infection spread to all areas of my life.

I grew up in the nineties, when no one was talking about mental health. You struggled in silence.

I battled demons in high school. I only lasted till eleventh grade before dropping out. I couldn’t stand the thought of spending another day being somewhere that made my life hell—but really, hell was inside me.

The voice inside my head was (and still is at times) vicious. Every day it was like the Vikings raided and settled into my thoughts to destroy my existence. Those thoughts have left scars that would look like battle wounds of lobbed-off arms if you could see them.

The voice inside my head was a reminder that I sure as hell would never do anything my parents would be proud of. It was easier to do nothing so that nothing was expected of me. I didn’t feel stupid if I didn’t try, so it made my reality an easier pill to swallow.

I did graduate and made my way to university, but my life became increasingly dysfunctional. My love for being black-out drunk on Sailor Jerry rum became the perfect way to cope with a chaotic mind I didn’t understand.

This comes back to not treating open wounds. Everything I resisted continue to persist.

I had next to no insight into what I was going through because I wasn’t willing to share that I was struggling.

At the time, my problems took on the weight of the world because I didn’t let people stand by my side to support me. I burned through relationships like a brushfire. I had no idea how to be in an open and communicative relationship because I barely had a relationship with myself.

Once the wounds became visible through therapy, I could stop the infection from poisoning my ability to think and function. Vulnerability saved my life. I have no doubt that if I didn’t get that support, I would not be here today.

We forget that our survival depends on being vulnerable. Author Brad Stulberg talks about this in his book, The Practice of Groundedness. He writes, “Our ancestors who survived weren’t those who were the strongest by traditional measures, but those who were most effectively able to share their weaknesses with one another and work together to overcome them.”

If I didn’t share what I’ve been through, would you still be reading this? Probably not. It would be just another fluff piece on embracing your vulnerability.

Without openness, there is no love and connection.

Without openness, you and I wouldn’t be sharing this moment.

Without openness, you and I can’t heal and grow together.

The idea of being vulnerable scares the sh*t out of most of us. No one wants to be perceived as weak or admit they have flaws. We’re afraid that the lions of the world will sense our weaknesses and pick us off one by one.

Except I’ve never actually been mauled by a wild animal when I’ve asked for help, or taken responsibility for a mistake. It’s actually had the opposite effect. Through my writing and vulnerability, I’ve connected with people on every continent of earth.

It becomes impossible for me to pretend my vulnerabilities are mine alone if people from all over the world have said I’ve captured what they’re struggling with.

This idea is backed up by research from The University of Mannheim, in Germany, that Stulberg references in his book.

He writes, “They repeatedly found that the individual doing the sharing felt that their vulnerability would be perceived as weak, as a negative. But the person on the other end of the conversation, the listener, felt the exact opposite: the more vulnerable the sharer was, the more courageous they perceived him or her to be. The listener viewed vulnerability as an unambiguously positive trait.”

And I think this is why a lot of us continue to feel stuck. We’re so damn wrapped up in worrying about what others will think of us when we open up that we miss the chance to connect.

When we feel we need to be perfect, it becomes impossible to grow because we’re not being honest with ourselves about how we’re struggling and what would help. My life couldn’t move forward if I refused to see the reality that partying, substance abuse, and pleasure chasing was an attempt to escape depression.

When you choose the illusion of perfection over vulnerability, you become a stunted version of who you’re capable of becoming.

The first place you get to take the armor off is when you’re staring at the reflection you see in the mirror.

Are you willing to be vulnerable with the person staring back at you?

Are you willing to admit that life is not going the way you want it to?

Are you willing to put aside judgment so you can get the help and support you need?

We all want changes, but are we willing to make the choices that give us that change?

These questions have the potential to shake the core of your foundation free from all the bullsh*t that accumulates over the years. It’s bloody liberating to let go of stories that no longer serve you—stories about who you need to be and what you need to do or have in order to be happy and loved.

I didn’t need to achieve a promotion or drive a sports car to receive love from my parents. I didn’t have to do anything to show the world that I mattered. I needed to ground myself in vulnerability, rather than an image of perfection, so I could show up as my authentic self and make a difference for other people by being the real, imperfect me.

Pretending to be somebody you’re not is exhausting work. Not to mention it does the complete opposite of what you want it to do. If vulnerability gives you the power to connect, lead, and grow, that means the inverse is also true. A lack of vulnerability means you end up feeling disconnected, a fraud, forever stuck with a fragile version of what you’re capable of because your ego is afraid of getting hurt.

Putting a name to what you’re facing puts the power back in your hands. So recognize that you too may be pretending to be perfect to avoid admitting you’re struggling and feeling vulnerable. That single choice to embrace vulnerability could be the most important decision you ever make in your life. And it just may give you the confidence to know you can face anything and rise above it.

Chris Wilson is a bipolar creative with a knack for personal development. He geeks out on productivity, minimalism, and enjoying life. He runs Simplify Your Why, where he shares lessons learned on overcoming his battles with depression, type II bipolar, and entrepreneurship. He created a free course for anyone who wants to lead a happier, more productive life of simplicity (with less stress). Click here to access it.

How to Be Intolerant of Dysfunction | Josh Shipp | Goalcast
High-Performance Companies are 6x More Likely to Have “Fit” Cultures (i4cp login required)
Looking for love? 44% U.S. adults use dating apps to find long-term partners: study
How I Stopped Feeling Embarrassed and Ashamed of Being Single
The two kinds of productivity advice