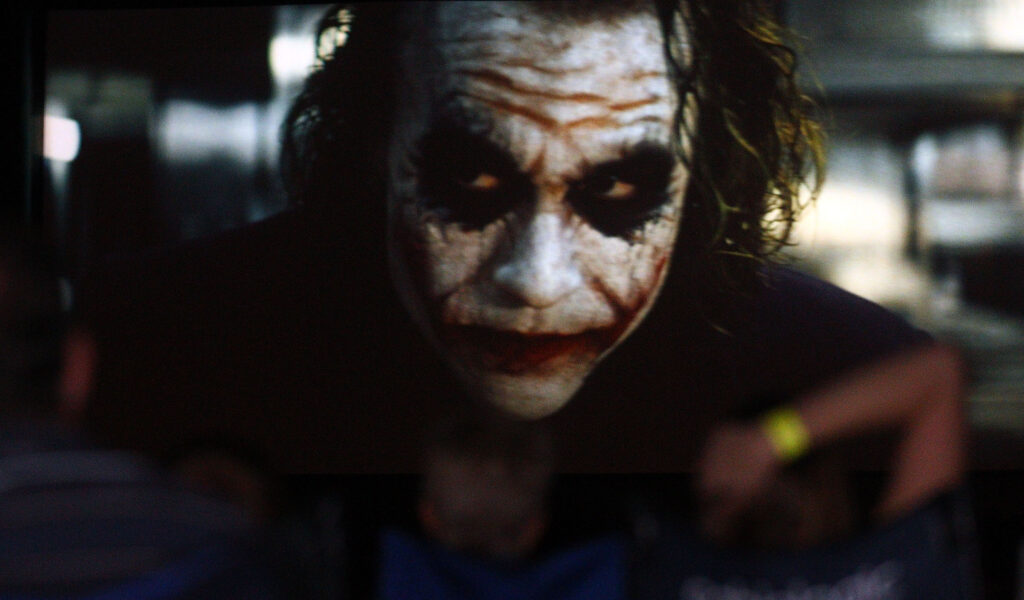 Heath Ledger’s Joker is arguably one of the most memorable performances in American cinema. The character’s abrasive nature, unpredictability and terrifying emotion made him a fan favorite almost immediately. What many don’t know is that Ledger initially signed on to be Joker before The Dark Knight was even written and completed. Ledger had enough faith in the team and after seeing what they’d done with Batman Begins, felt confident enough to take on the part.

A benefit to his early adoption as the joker was that he was able to incubate the role for quite some time. Ledger spent months cooped up in a hotel room, trying to figure out what his version of the joker would look and sound like. “Heath spent months and months [preparing], we cast him even before the script was written so he had a very long time to obsess about it, think about what he was going to do, to really figure it out,” director Christopher Nolan explains.

What Ledger came up with was something no one saw coming, and undoubtedly his role as Joker will be remembered forever.

The Voice of Heath Ledger’s Joker

Nolan admitted that there was initially a lot of doubt surrounding Joker and the role Ledger would play in bringing him to life. The character was complex, paradoxical and ever-shifting. Ledger had to completely make the character his own but still keep him recognizable to the larger audience. He had to do justice to the original interpretation of the Joker character while reinventing him all at the same time. A key facet to the character ended up being Joker’s unmistakable voice. The eerie and off-putting cadence that turned the character into one of the most unforgettable of his time.

That unpredictable nature in both Joker’s voice, but his character as a whole ended up being one of the most iconic portrayals in modern cinema. “The voice was certainly scary because it would shift in pitch,” Nolan said. “You never quite know which way the pitch is going to go with the voice. Just as the physical movements were [unpredictable], you didn’t know what he was going to do with his hands, the way he moved, it was always a surprise. The actual tone of his voice was a surprise too. Sometimes threatening and sometimes more sing-song and light.”

Nolan also recalls that at first the crew was utterly confused by Ledger’s portrayal. They’d been so used to Jack Nicholson’s portrayal of the character that they felt it was forced, unnatural and wouldn’t sell well on screen. After only a few days though, the entire cast and crew were sold. They knew they were witnessing something really special.

The Inspiration for Heath’s Joker

There were undoubtedly many different inspirations that Ledger studied for his role as the Joker. He famously absorbed material such as A Clockwork Orange, and also immersed himself in the paintings of artist Francis Bacon to weed out the character he was looking for. It’s reported that Sid Vicious from The Sex Pistols was also an archetype that Ledger used to base his performance off of.

Many also speculate that Ledger used artist Tom Waits as an inspiration for Joker’s voice. The artist and character have strikingly similar vocal tones and pitches, and many believe Ledger used his voice as one of the main focuses in his preparation for the role, although this hasn’t been confirmed by Nolan or Ledger.

The Legacy and Aftermath of Heath Ledger’s Iconic Portrayal

In hindsight, it’s hard to imagine the Joker being played by anyone other than Heath Ledger. The role was honest, forthcoming and undeniably powerful. It’s become a cornerstone of cinema and one of the best villain portrayals of all time. It’s funny to think that the initial casting was met with so much backlash. Even Nolan’s brother, Jonathan Nolan who co-wrote the film was initially baffled by the decision.

“Chris had a good meeting with Heath Ledger, and no one got it,” Jonathan Nolan said in an interview. “I didn’t get it. The studio didn’t get it. Everyone was kind of coming at Chris and saying, ‘We don’t see it.’ And the fan community was….we were f*****ng pilloried for,” Nolan added. “’This is a disaster. This is the worst casting decision ever made.’ And Chris just hunkered down and stuck to his guns and just kept moving along.”

Surprisingly enough, despite the backlash and initial pushback on Ledger as the Joker, Nolan had initially envisioned him as the next Batman. He’d asked Ledger to consider the part in Batman Begins, however Ledger turned the role down. “’He was quite gracious about it, but he said, ‘I would never take a part in a superhero film,’” Nolan recalled. However, Ledger later reconsidered after seeing Nolan’s take on superheroes in Batman Begins. “I explained to him what I wanted to do with Batman Begins and I think maybe he felt I achieved it,” Nolan revealed.

Ledger went on to posthumously win an Academy Award for his performance, undoubtedly well-deserved. Sometimes the greatest characters come from the most unexpected places, and this was such a case. No one expected Ledger, who’d never really played a role as dark and provocative as this one, to forever change the face of villains in superhero films. Ledger’s role is cemented in history, and the work he did to achieve such a balance will also be remembered. The lead-up to the film took a costly role on Ledger’s health, and played a role in his eventual passing. The film-community was shocked by his death, but grateful for his courage and the role he played in delivering one of the best superhero films of all time.

How I Went From High-School Drug Dealer to Startup Millionaire | Gerard Adams | Goalcast
I Cheated on Him with My Higher Self (and We’re Still Going Strong)
This Is Why You SUCK At Love | Adam Roa Speech | Goalcast
Hard Times eBook Sale: Buy One, Give One (This Weekend Only!)
Kind Stranger Pays for a Young Mother’s Pancakes – She Doesn’t Realize The Impact of Her Deed