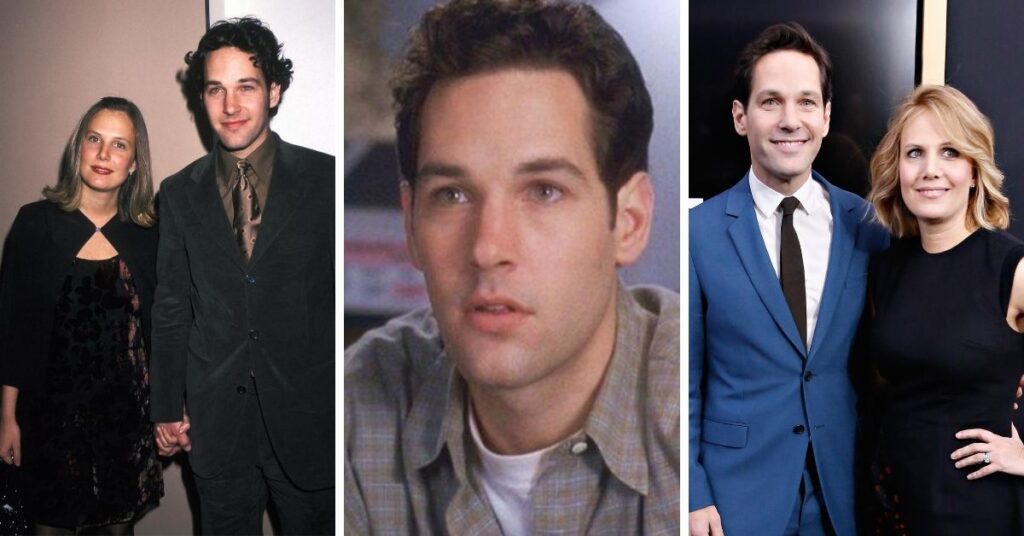 Paul Rudd is one of the most beloved actors working today. He had his first big break with 1995’s Clueless as Josh. He stole our hearts then and he still has them to this day. People Magazine agrees, after all, Rudd is the reigning Sexiest Man Alive. Unfortunately for us (but very fortunate for Rudd) his heart is very much taken and has been since shortly after Clueless premiered in 1995. When asked what his best feature is, Rudd replied, “I’d say my wife,” Elle UK revealed.

Rudd met his wife Julie Yaeger when he first moved to New York City in 1995. After a string of mishaps in Los Angeles including being robbed at gunpoint, having a friend killed in a car crash, having his car stolen, borrowing a friend’s car only to have it damaged when he aquaplaned in it, which led him to rent a car that was totaled in a hit-and-run-accident. In an interview with Mr. Porter, Rudd revealed that all of this happened in the span of one week and led to his decision to flee Los Angeles for New York City.

Clueless’s director Amy Heckerling told Rudd that he needed to get a publicist ASAP. He walked into the office of a publicist with his luggage in tow. He was late for an audition, so the publicist told him she’d have his luggage delivered later. Julie Yaeger delivered his luggage, and the rest is history – 27 years and counting of it.

Paul Rudd and his wife Julie Yaeger Rudd are #relationshipgoals. Their meeting seems like it was fated. Yaeger was the first person Rudd met when he moved to New York City in 1995. During an episode of Friday Night in with the Morgans (that would be Jeffrey Dean Morgan and Hilarie Burton), Yaeger said, “Clueless was getting ready to come out, that’s when we met. I worked at a PR firm that he hired. And he got more than PR.” Rudd didn’t know anyone in the city, so a few days after the girl from the publicist’s office dropped off his luggage, he asked her to lunch. They’ve been together ever since.

In an interview with Marie Claire in 2018, Rudd said, “We started talking and there was a maturity with her, and she had experienced some tragedy in her life, I had too, and the impression I got was, wow, this is a woman. This isn’t a girl.”

Rudd and Yaeger were definitely in the right place at the right time to meet each other. He went on to say how taken he was with her and how she had handled the hard times in her life.

The two dated for eight years and were married in 2003. They have two kids, Jack and Darby, and currently live in New York City and upstate New York.

Julie Yaeger Is a Producer and Screenwriter

Yaeger worked as a publicist in the 1990s and 2000s. Now, she’s a mom and screenwriter. In fact, she wrote a movie that her adorable husband appeared in, Fun Mom Dinner, which starred Molly Shannon, Toni Collette, Katie Aselton, Bridget Everett, and Adam Scott, per IMDB. The film is about four women who think they have nothing in common but being moms to kids who are friends. Of course, they end up bonding over a night filled with shenanigans. Rudd has an unforgettable cameo in the movie.

RELATED: Kevin Bacon and Kyra Sedgwick’s Secret to a Happy 34-Year Marriage Will Astound You

Yaeger based the premise of the movie on her own friendships. In an interview with Vulture, she talked about coming up with the idea for the film and how she worried she wouldn’t find good mom friends.

“What ended up happening was I ended up finding an amazing group of mom friends, and I was really surprised by how much this group of ladies enriched my life…” She says she wanted the marriages in her film to be real and how even in the healthiest of relationships there can be “missed connections” because both people are so focused on raising their kids.

Paul and Julie Rudd own a home in upstate New York near Rhinebeck. It just so happens actor Jeffrey Dean Morgan and his wife Hilarie Burton also live in the area. Samuel’s Sweet Shop was an institution in the town since 1994 but when its owner died, the store fell on hard times, and the Rudds along with the Morgans stepped in to save the store. It turns out the two men were loyal customers of the store and went there for years.

RELATED: Paul Rudd: The Man Who Can’t Age and His Best Movie

Yaeger revealed how she feels about being an owner of a candy store on the website for Samuel’s Sweet Shop, saying, “The magic of Samuel’s, especially during the holidays, makes me feel like a little girl again.”

Yaeger and Rudd have been together for 27 years. They must be doing something right because Rudd’s favorite place to be is at home with his wife and kids. In a 2021 interview with People he says, “When I think about myself, I think of myself as a husband and a father, like I’m that. I just hang out with my family when I’m not working. That’s what I kind of like the most.”

RELATED: Gisele Reveals the Secret to Her 15-Year Marriage to Tom Brady – And It Will Change How You View Him

Well, maybe not that normal of a life. After all, Rudd is the reigning Sexiest Man Alive. When he found out he landed that honor, his wife was the only one he told before it was officially announced.

He said, “She was stupefied. But you know she was very sweet about it. After some giggling and shock, she said ‘Oh, they got it right.’ And that was very sweet. She was probably not telling the truth, but what’s she going to say?”