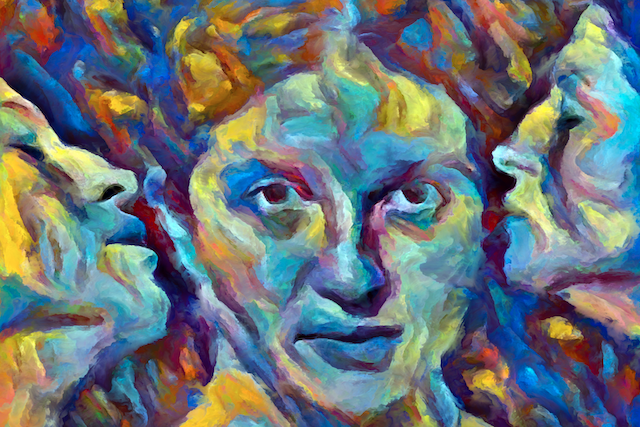 “Do your best and be okay with that.” ~Ursula Wharton

Late one evening I was doing some work at the last minute when my phone buzzed with a text from Alex, my neighbor’s boyfriend. They said they were rushing over and then I saw, “Chris is trying to kill themselves. You gotta get in there and stop them.”

I felt sick to my stomach. I stood up too fast from my chair and dropped my phone onto the ugly grey carpet beneath my bare feet. I rushed to Chris’s apartment, which was right next to mine.

Thankfully, the door was unlocked and led to the living room where Chris was writing on a piece of paper. Tears furiously ran down their beet red face. Chris looked at me, scared with hands shaking, and said, “I can’t do this anymore.”

My heart pounded against my chest. I kept my voice calm as I tried to get Chris to explain what had happened, but they just cried and I cried with them. I tried to keep Chris safe and their mind away from hurting themselves.

I was terrified they had already done what they needed to stop living, but they said they hadn’t taken anything. I had no way of knowing. Everything from that night is a blur except the fear of losing my friend.

Eventually, the ambulance Alex had called arrived and took Chris to the hospital. I answered the paramedics questions about Chris and their history of mental health. No one asked how I was doing.

I thought they were valid not to ask because I wasn’t the one suicidal. I was scared, shaking, and crying, but I was safe. I had no thoughts of ending my life.

I didn’t matter in that moment. Only Chris. Their safety was important.

That was the number one priority for the paramedics which then made me believe my top mission from then on was to make sure Chris was safe at all times. A job no one asked me to take.

Chris and I were close friends. We enjoyed meals together, talked about anything on our minds without judgment, and always reassured the other we would be friends no matter what. After the night of the suicide attempt, my work, health and well-being were nothing compared to what I thought Chris needed.

I didn’t need to focus on myself since I didn’t have any desire to hurt myself.

Chris had been in what I thought was a loving relationship with Alex. After that night, I began to see red flags.

Alex would tell Chris that they didn’t need anyone else. Alex would love and care for Chris in ways that no one else would. No one would have the same patience and understanding for Chris’s mental health the way Alex did.

Chris didn’t want to marry or have children, whereas Alex would reply, “Then there’s no point to a relationship.”

Chris wanted to take time to travel and find out more about themselves. Alex said, “Traveling is overrated. You can find yourself at home when we’re married with children.” When I asked Chris privately what they wanted, they would tell me, “If that’s what I have to do to be with them, that’s the price I’m willing to pay.”

Most of my year was focused on intense projects for work while I used my free time to listen to Chris ruminate about their feelings and relationship Alex. Chris and I stayed up late talking about what they wish they could do, asked me for advice, and comfort them when they were intoxicated. I didn’t need eight hours of sleep or exercise or figure out coping mechanisms for myself.

I was safe and healthy since I didn’t have suicidal thoughts.

Not long after Chris’s attempt, they broke up with Alex. Chris felt “relieved.” I was available to help Chris get ready for dates with other people and listen to them compare the date to Alex.

Chris mimicked Alex’s words, “They are the only one who was patient enough to deal with my mental health.” I watched them get back together as Chris became more stressed and miserable. I let their worries transfer onto me, but I was fine.

Months went on and I ignored the stress-induced sleep paralysis and panic attacks. I blamed it all on my stressful work, so I cut back on work, which made me fall behind. Music and movies I loved became stressful because all I could think was how Chris might hurt themselves at the moment I would relax.

The only thing that mattered was keeping Chris safe. It became an obsession, and I placed unrealistic expectations on myself. Expectations that were causing me terrible guilt, shame, and isolation.

Later on, I entered the apartment building and saw another neighbor, Charlie, at the elevator. We didn’t know each other that well, but we were always friendly to the other. I tried to make small talk the way we usually did but Charlie stared at their phone and only replied with short answers.

I decided to take the stairs. Each step I had trouble breathing, my heart pounded louder than ever, and the fear of death became overwhelming, I almost fainted. I felt afraid of this unfamiliar sensation in my body and remembered there was a counselor’s office close by.

I ran over without calling. Thank goodness she was kind and didn’t have an appointment. She let me in, saying I was experiencing a crisis. “No, I’m fine! I’m just a little scared,” I told her.

How could it be a crisis if I wasn’t suicidal?

I spilled out all of my fears and thoughts to the counselor. I told her all about Chris’s situation and how I felt like I had failed to help Chris’s mental health.

“I don’t understand why Charlie’s actions made me feel like this. They were probably on their phone busy with work. Why was that the event that sent me down a spiral?” I choked out between sobs.

The counselor looked at me and replied seriously but sweetly, “Because it takes just one drop of water to overflow the glass.” I stopped crying and took some deep breaths as I digested their words. She noticed my shift in thought and asked, “What are you thinking?”

I thought for another moment and realized she offered me something I didn’t know I wanted or needed: validation. Acknowledgement that what I went through the night of the suicide attempt affected me. Then I realized that a fifty-minute session with someone I didn’t know made me feel more loved and cared for than the entire year I had with my friend.

Later on, my lease was up. Chris was back with Alex as miserable as ever. I decided to move.

Not to get away from them but rather to figure out what I needed to do to help resolve the trauma I endured. I accepted that I went through a traumatic experience and that I needed to deal with the symptoms that could no longer be ignored.

I moved to a healthier environment: home, with my family’s permission, of course. Being in a familiar place with trustworthy people provided me with the love I didn’t realize I lacked. I felt safe.

I developed a regular sleep schedule, returned to exercise, ate healthier, and discovered a newfound appreciation for journaling and writing as a coping mechanism as well as a career choice. My family was able to be there when I needed, and I was there for them when they needed it. A much better balance.

Today, Chris still reaches out to me for advice they continue to ignore, but I’m still there for them. We’ve established better boundaries together and returned to a better friendship. Taking time to look after myself allowed me to see how I wasn’t qualified for doing the Chris’s work.

I didn’t do Chris any favors by only focusing on them and their problems. I was an enabler with their behavior by not encouraging them to seek the proper help and care they deserved and needed.

The hardest part about helping people is the expectations from yourself and those you help. My goal was to prevent Chris from feeling suicidal and unhappy. I thought my goal was to help them, but really I wanted to cure them.

I wanted to cure Chris of their problems, but I couldn’t and I thought of myself as a failure. When Chris realized I was a helper, they came to me for a cure. They wanted me to take away their problems or offer lifesaving advice rather than take the time to do the extremely hard work to help themselves.

People experiencing co-dependency have expectations that you will always be whenever they need you with a cure loaded and ready. Both of these expectations set me up for major disappointment.

That year taught me that we can and should help others, but it’s impossible to do so if we don’t take care of ourselves. We can’t risk our own health and well-being at all times because we become overworked and burned out to the point that we don’t even recognize who we are. I chose to ignore my burnout symptoms because I thought my problems were way to small compared to Chris’s.

I was hurting myself when I refused to admit I experienced trauma. During these stressful times, please don’t overflow your glass. It’s easy to think that if you have your health, job, and money, that you shouldn’t have a peace of mind.

You are worthy of finding help and taking the time to care for yourself. What you go through matters, no matter how big or small you think your problems are. You are just as important as anyone else.

Give yourself a break.

How to Be Intolerant of Dysfunction | Josh Shipp | Goalcast
Podcast: What to know about “novelty hunting.”
Haute couture goes ‘surreal’ and upside-down at Paris fashion show
Mexico’s richest man lists $80M NYC mansion and it could break records
Deliveryman Arrives to Pick Up an Order From a Bakery – Breaks Down When He Finds Out Why His Own Name Is on the Package