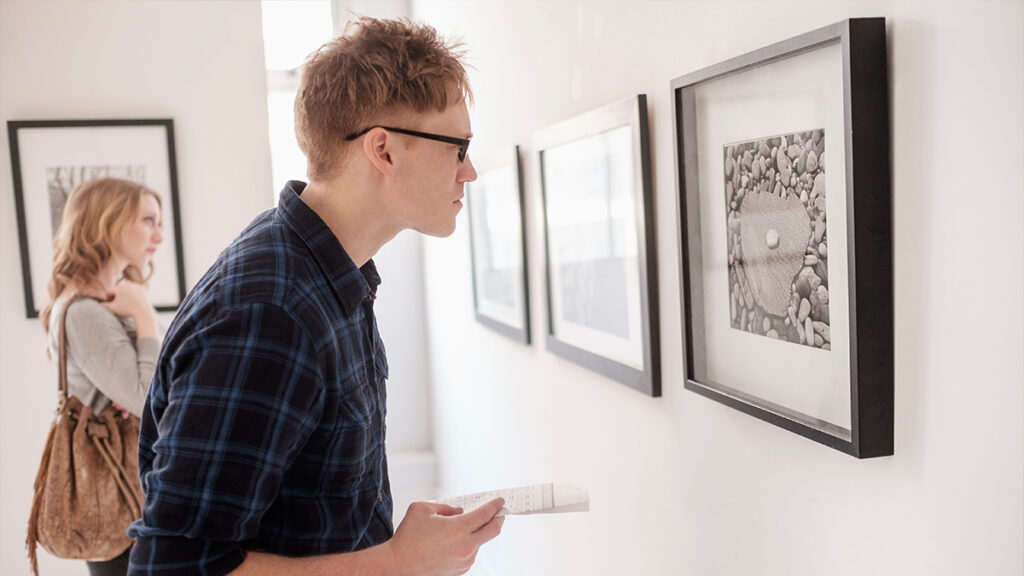 A chiseled jawline. Jesus’ abs. Full lips. The hourglass figure. When it comes to sexual attraction, there are certain cliches about what qualities people look for. Those just mentioned are, admittedly, superficial. Beyond physical appearances, other common traits include kindness, honesty, or a solid sense of humor.

But human attraction is a complex thing. And one area growing in significance when it comes to sexual attraction is intelligence. Yes, sapiosexuality is the new trend when it comes to dating. Despite sounding like a latin verb that originated from Ancient Greece, the word sapiosexual is an adjective, and was only added to Merriam-Webster dictionary in 2020. Collins Dictionary classifies this as a “neologism word,” one which was recently constructed (by someone clever, clearly).

Social media memes and dating apps are largely behind the rise in popularity of sapiosexuality. In 2014, OkCupid listed sapiosexual as an option when choosing sexual orientation. And a dating app based on the name, sapio, has a mission to “foster engaging conversations that enable people to find partners who are both physically and intellectually attractive.”

But what’s behind this trend? Does intelligent conversation turn you on? Are you a sapiosexual person, and is sapiosexuality a recognized sexual identity? Let’s explore!

What is sapiosexual preference? Talk nerdy to me

Sapiosexuality is the phenomenon of being “sexually attracted to highly intelligent people.” It speaks to those who view intelligence as the most important trait. Although this is a relatively new word, the origin comes from the Latin root sapien (the same as homosapien), which means wise or intelligent.

In 2019, the French minister for equality, Marlène Schiappa, described herself as sapiosexual, whilst singer Mark Ronson apologized for “coming out” as sapiosexual during a TV interview. The same year, OkCupid decided to remove the option from their app.

Why the uproar? Sapiosexual people are self-identified, and like all online trends, is more superficial than meets the eye. Within this context, sapiosexuality has been criticized for its potential to be ableist or discriminatory, and that it’s a sexual preference, not a sexual orientation.

The controversy of sapiosexuality as a sexual identity

The language to describe sexual orientations has evolved in recent years. In addition to the traditional labels of heterosexuality, homosexuality, and bisexuality, there are a multitude of orientations, most added with the last decade, that include:

These sexual identities go beyond desires or fleeting experiences. Whilst in the past different sexual interests wouldn’t define someone’s identity, this trend is growing. “The model of sexuality as an inborn thing has become so prevalent that people want to say ‘this is how I feel, so perhaps I will constitute myself in a particular way and understand this as an identity’,” William Wilkerson, a philosophy professor at the University of Alabama-Huntsville, told Quartz.

That can result in “identifying” with preferences or seeing certain qualities as part of a wider personality. It’s not easy to define intelligence, either — is sapiosexuality related just to academic achievement or intelligence in fields of science, literature, or math? And what about other forms of smarts, like emotional intelligence, or creative intelligence?

Online quizzes add to the problematic nature of sapiosexuality, with questions on sites such as BuzzFeed asking readers if they’re “repulsed by the idea of having sex with someone who had never gone to college, or had no interest in higher education.”

With that in mind, it’s best to take the term itself with a pinch of salt. But that doesn’t mean sexual attraction towards intelligence isn’t a reality for many people.

The psychology of sexual attraction

The first scientific study into sapiosexuality took place in 2018, with its findings reported in the Intelligence journal. Although most people look for intelligence in a partner, the study did find that a small percentage of people reported sexual arousal to high degrees of intelligence. In ranking desirability in a partner, intelligence ranked second, behind “kind and understanding,” and ahead of “exciting personality” and “easygoing.”

Interestingly, the desirability of smart people reached a peak with an IQ of 120 (people smarter than 90 percent of the population) and dropped between 120 and 135 (people smarter than 99 percent of the population. That means, from this study’s finding, there is a limit to attraction and intelligence. Being able to recite Nietzche or wax lyrical about socio-political issues might be a turn-on, but being a misunderstood genius? Not so much.

Again, human attraction is complex. Whilst certain animals are sexually attracted by certain traits, human attraction includes a multitude of factors. Yes, some physicality is involved, along with biological cues such as pheromones — chemical signals that are detected and picked up on unconsciously. At the same time, we’re the only species that are attracted to personality traits.

There is a distinction between attraction, intimacy, and romantic love, too. “Probably the most unexpected discovery, and the one that really changed my own thinking, was the fact that sexual orientation doesn’t necessarily ‘orient’ one’s capacity for romantic love,” psychologist Lisa Diamond told PsychologicalScience. She adds:

“In my research, I found that lesbian women sometimes fell in love with their close male friends, even when they weren’t attracted to them, and heterosexual women sometimes fell in love with female friends. I soon found that this has been true throughout human history, and it led me to investigating the biobehavioral independence of sexual desire and romantic attachment.”

“Like any sexual orientation or preference, [sapiosexuality] exists on a spectrum,” Dr. Tari Mack, a psychologist and relationship expert, told Bustle. “Some sapiosexuals are purely attracted to people based on their intelligence and some find it simply one of the most attractive qualities in a potential partner.” So how do you tell the difference? How do you know if intelligence is part of your sexual preference, or if you’re a fan of intellectual intimacy?

1. Deep conversation is a turn on

Small talk probably won’t cut it, at least not if it’s the default with your romantic partner. The desire for intellectual intimacy and deep conversation is common, but if you’re sapiosexual, rich dialogue with a smart person is essentially foreplay. This involves sharing yourself through conversation, but also the way you feel witnessing your partner talk. Does their articulation draw you in?

This point has drawn some criticism. In a fairly unforgiving take, Rajvi Desai writes for the Swaddle, “[sapiosexuality] is — a trait that’s less about a peculiar attraction to intelligence in others, and more about staunchly positioning oneself as someone not swayed by conventionally beautiful people, or not looking to have a mindless one-night stand.”

Harsh words, but helpful guidance. Yes, it can be tempting to feel above certain primal desires, attaching to an idea of only being attracted to intelligence. Being able to discern between ego-based superiority or dating app posturing, and a genuine attraction to intelligence, helps reveal where your true sexual desires reside.

Prefer poetry slams to picnics? Prefer browsing someone’s bookshelf to scrolling through their Instagram picture? Your dating rituals also provide insight into your level of sapiosexuality. If your idea of a good time involves an environment that is intellectually stimulating, it says a lot about your attraction. That’s not to say fun is off the table (these activities are fun, for those who enjoy them), but there’s a certain level of importance when it comes to bonding.

A sapiosexual will want to bond in a way that prioritizes intellectual stimulation. But there can be a mix, too. And it’s not necessarily the only way you’ll court a potential suitor.

In addition to dating, when two people get to know each other, they find common ground to build a connection. For sapiosexuals, a large part of this bonding process will involve recommending books, art, or music. It’s a way of displaying intellectual flair, and conversely, receiving well-thought-out recommendations can be a powerful way of discovering deeper levels of compatibility.

5. You appreciate a partner who is self-aware

Like all things in the universe, even the topic of sapiosexuality circles back to self-development. One reason sapiosexuality is so hard to define is that intelligence itself is so hard to define. It depends somewhat on perspective. “Everybody is a genius,” a famous quote, often associated with Einstein, says. “But if you judge a fish by its ability to climb a tree, it will live its whole life believing that it is stupid.”

There are many, many forms of intelligence. Self-awareness and emotional intelligence are one form, and you may find yourself attracted to a partner who is willing to learn and grow. That doesn’t just mean reading or gaining knowledge. But working to create a deeper understanding of communication and human interaction. When it comes to relational harmony, it doesn’t get more intelligent than that.

6. Your level of attraction grows over time

Humans are infinitely rich. The process of “getting to know someone” is never-ending — even couples that have been together for decades can still learn new insights about each other! For sapiosexuals, this is great news, because it means attraction levels continue to build as you get to know and understand someone’s mind.

Physical attraction doesn’t have to be superficial, but it can fade, especially after the honeymoon period. When your level of sexual attraction comes from multiple areas, you’re much more likely to keep the fire burning and keep the passion alive.

What purpose does all of this serve? Considering the controversy around the term sapiosexual, and debate around whether it’s an orientation or a preference, it’s best to use this knowledge skillfully. How so? It comes down to self-awareness. Whether you’re on the dating scene or looking to deepen understanding and intimacy with a current partner, having an idea of your own likes and dislikes allows you to communicate what you need, and what works for you.

If you realize you have a strong attraction to intelligence, it’s something not to overlook, especially if this is a dealbreaker. Get practical and consider the ways in which you can invite this into your romantic life — such as suggesting a book club with your partner, or looking for new lovers who explicitly display an interest in the intellectual pursuits you enjoy.

But, always keep in mind, Cupid’s arrow remains largely mysterious. You can’t plan who you’ll be attracted to, and it’s likely what you’re attracted to will evolve over time. So above trying to identify qualities or create rigid labels about who or what you are attracted to, remain true to yourself. And from that source of truth, you’re much more likely to experience true attraction, and deep love, as the rest of the jigsaw pieces fall into place.