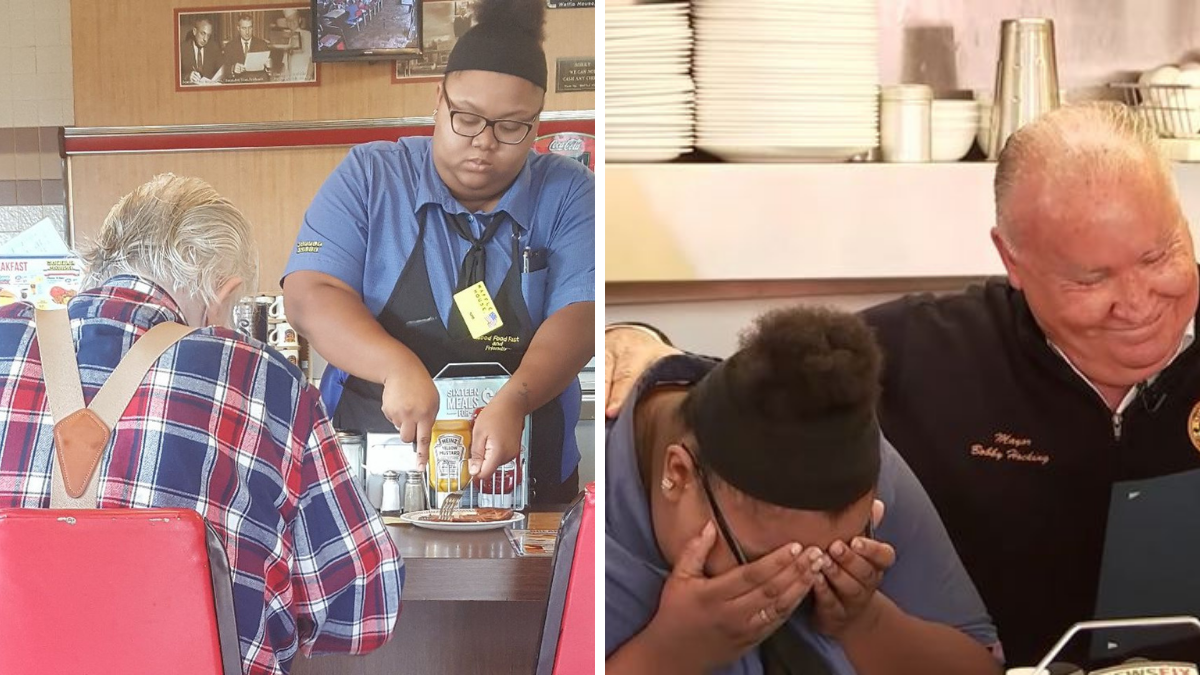 A friend in need

A tough task for sure, however she wasn’t the only person with a lot on her plate.

78-year-old patron Adrian Charpentier, who uses oxygen, said he was having trouble using his hands to cut the ham on his plate.

Williams, who goes by the nickname ‘Nini’, told KHOU that she didn’t hesitate to help.

He was like, “‘My hands are not functioning too well.’ He needed me to cut his food and I did,” Williams shared.

She stopped everything to cut Charpentier’s meal into bitesize bits.

Unbeknownst to Williams, customer Laura Wolf was sitting nearby and watched the whole sweet scene unfold.

It was so busy in here and she actually took the time to stop and hear what he had to say instead of walking past him. That just meant something to me

She snapped a pic of the kind act and shared it on Facebook. “If we could all be like this waitress & take time to offer a helping hand …” read the caption.

Word of the post quickly made its way to Charpentier. “Somebody told me a few days later that I was very popular because they got me on Facebook,” he recalled.

The post went viral with close to 50,000 shares. Yet no one could have imagined what happened next.

Lights, cameras and media descended on the restaurant to both thank and surprise the star of the hour, Evoni Williams.

Williams was presented with a $16,000 scholarship to Texas Southern University, plenty to cover the tuition she’d worked so hard to earn.

That wasn’t all. Her kind act was immortalized, as the City of La Marque declared March 8 “Evani ‘Nini’ Williams Day.”

A teary Williams was blown away.

I didn’t think it was going to go big. But I thank you all. It’s just something I would do any other day

I’m thankful to have seen this act of kindness and caring at the start of my day while everything in this world seems so negative.

“If we could all be like this waitress and take time to offer a helping hand.”

How many times have we been caught up thinking, searching for a way we can help others but can’t find the right cause, the right time, the right place? I’d love to do something someday, we say to ourselves.

From helping someone at the diner, holding the door or even flashing a smile to a passerby, there are opportunities to help everywhere.

If stories like Evoni Williams prove anything, it’s to never underestimate the impact of even the simplest acts of kindness both on that person and those who might be watching.

Wether it’s saving someone at sea or giving up your plane seat, kindness makes a lasting impact.

Waitress Soothes “Fussy and Teething” Baby So Mother Can Finish Her Meal
Why I Didn’t Trust Myself to Make Decisions (and What If It’s All Okay?)
Beyond Dry January: 5 Benefits of Extending Your Break from Alcohol
‘Gen Z yellow’: Next ‘it’ colour or marketing ploy?
Four Priorities for Talent Acquisition Leaders in 2023 (i4cp login required)