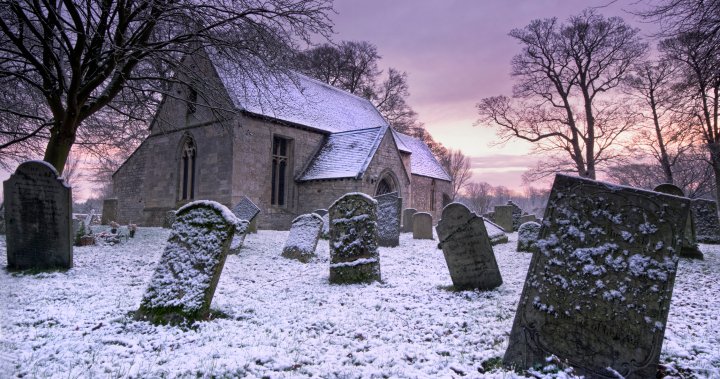 If you’re on the hunt for a quick scare this Halloween, check out these ghost tours and haunted walks across the country.

Whether you’re a history buff or a budding ghost hunter, Canada is filled with spooky sites to discover from coast to coast. Looking for a way to add some frights to your fall or can’t resist a scary story? Here are the 12 best ghost tours and walks across Canada — plus a bonus road trip option if you’re in southern Ontario.

The top 10 Halloween costumes for 2022, according to Google’s ‘Frightgeist’ tool

This award-winning tour of Canada’s oldest city takes you to scary spots like Victoria Street, the “most haunted” street in St. John’s. You’ll also get to check out buildings and cemeteries while your tour guide shares tales of public hangings, duels, murdered soldiers and more. St. John’s Haunted Hike also has a popular paranormal investigation series at the LPSU Hall that is sold out for the season.

You can now stay in one of these haunted vacation rentals

Niagara-on-the-Lake has a bloody past that includes the War of 1812, and tours through this area have some of the most-reported alleged sightings of paranormal activity. Niagara-on-the-Lake Ghost Walks include stops at the Olde Angel Inn, the Courthouse, the Royal George Theatre and the Prince of Wales Hotel. If you plan far enough ahead, you can also book a tour of Fort George, a site that’s as famous for its ghosts as it is for its place in Canadian history.

The world’s most enchanting castles

With such a rich history it’s no surprise that Victoria, British Columbia has hundreds of ghostly encounters to explore on this tour, from true crime to tragic accidents. Get ready for a scare, as Victoria is touted as the “most haunted” city in the Pacific Northwest. Ghostly Walks will take you to spots like the Supreme Court building, and will share stories of the public executions that took place at the jail that once stood there.

20 abandoned towns you won’t believe are in Canada

Beneath the ski resorts and quaint mountain town charm lies Banff’s dark, hidden history, explored in the Banff Ghost Walk. Stroll through the historic streets and learn about the haunted landmarks, unsolved local mysteries and alleged paranormal encounters at some of its hotels. The Fairmont Banff Springs Hotel, one of the “most haunted” buildings in Canada, is located here. It’s the alleged home of the ghost Sam, a bellman who passed away in the 1970s but still reportedly wanders the halls offering a helping hand to its guests.

Halifax’s history includes a harbour explosion, pirates and ties to the Titanic, so it’s no surprise that the oldest ghost tour in North America, The Halifax Ghost Walk, is one to add to your list. Beginning at the Old Town Clock on Citadel Hill, you’ll walk through the streets of Old Halifax to spots like the Historic Properties and the Maritime Museum of the Atlantic while learning about hauntings, buried treasure and more.

By day, Old Montreal is a charming slice of history with its restaurants, cafes and churches. When the sun sets, experience the city’s dark and sordid past with Montreal Ghosts. As you walk through cobblestone streets and alleys, you’ll not only hear the chilling tales of witchcraft, unexplained phenomena and crime in 17th century New France, but you’ll also see them brought to life by professional actors.

The 10 cutest spots in Montreal for a first date

With sites like Fort Henry, Murney Tower and the Lower Burial Ground, visitors believe that there could be ghosts lurking around Kingston. The Haunted Walk of Kingston tour through its old Sydenham Ward includes stops at “haunted” hotels, the old courthouse and the infamous courtyard. Throughout the tour, the guide shares tales of grave robbings, hangings and more. A separate tour of Queen’s University is also available, with chilling stories connected to nearly every building on campus, including a heist gone wrong and professors trying to connect with students in the afterlife.

Winnipeg’s longest-running ghost walk tour company, Winnipeg Ghost Walk, has three different options to explore: the Exchange District, Seven Oaks and Broadway. If you can only pick one, go with the Broadway tour that begins at the “haunted” Manitoba Legislature building, taking you through the paranormal accounts along Broadway and Memorial Boulevard before concluding at the notorious Fort Garry Hotel.

13 haunted hotels you can still stay in

Step back in time to Toronto’s early days with The Haunted Walk of Toronto’s original tour. It departs from the courtyard outside of the Hockey Hall of Fame before taking you to spots like creepy theatres and the oh-so-scary Mackenzie House. Venture outside of the downtown core if you dare and head out on one of their other tour options, which tours the Distillery District, University of Toronto and Black Creek Pioneer Village.

Toronto slang and where it actually comes from

The stone buildings and narrow cobblestone streets of old Quebec hold 400 years of shocking stories, from hauntings to executions. Costumed guides take you through the city at night with lanterns in hand, beginning at the Petit Champlain shopping district. Over 90 minutes, the Ghost Tours of Quebec guides will share accounts of alleged ghost sightings, murders and tragedies that you won’t find in your history books.

For an evening of scary tales straight from the city’s history, Ghostly Vancouver Tours promises an unforgettable experience. In their Gastown tour, you’ll walk the cobblestones and learn about famous figures like the crying Lady in White and the Headless Brakeman. The Downtown tour takes you to “haunted” theatres, galleries, hotels and other buildings known for supposed ghostly encounters.

Here’s why women are obsessed with true crime, according to an expert

Take a journey through Edmonton’s past with one of several exciting tours from Edmonton Ghost Tours. The Old Strathcona tour features stops at the Strathcona Hotel, the Princess Theatre and the Strathcona High School. Learn about ghost tales like the little boy at the Rutherford House and the scientist at the Power Plant during a tour and haunted hike of the University of Alberta. Haunted trolley and haunted pub tours are also available, or if you prefer your history without ghost stories, opt for one of the cemetery walks.

If you’re in Southern Ontario and love a good road trip, Guess Where Trips has two different options this fall: Spooky Sights and Ghostly Tales and Haunted History. You won’t know where you’re going until you get your itinerary.

The post Up for a Spooky Stroll? 12 Best Ghost Tours and Walks in Canada appeared first on Slice.