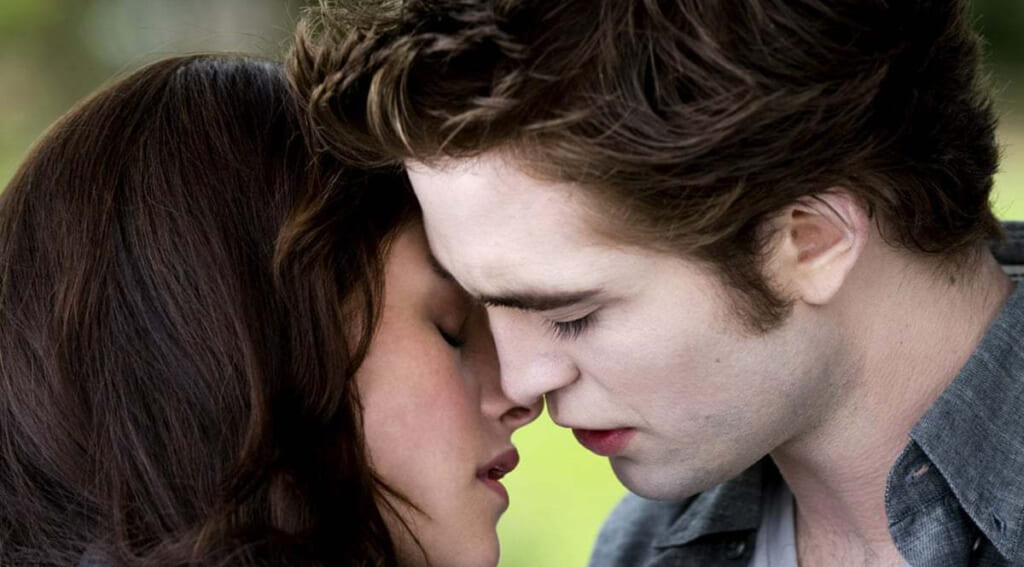 What if we told you that some of your favorite fictional relationships were problematic? If you grew up watching The Twilight Saga, then you may have been conditioned to view the relationships represented in the films as romantic, idyllic and passionate. But what if they’re just the opposite? What if the iconic love triangle of Twilight was toxic?

RELATED: This Is Why It’s So Satisfying to Reread Favorite Books and Re-Watch Favorite Movies

It can be easy to manipulate girls into thinking what they’re seeing is a fantasy rather than a nightmare. These patterns we now recognize looking back at the Twilight films reflect real issues that can occur in our own interactions. Let’s talk about some red flags in Bella Swan’s relationships with Edward and Jacob, and why they were more toxic than we remember.

How Twilight Covered Up Toxic with Charm

Stephanie Meyer’s The Twilight Saga updated the vampire trope in literature, making it approachable for teens with her YA spin. The novels gained popularity so quickly that they were picked up for movie deals in hope of enjoying that same success. To no one’s surprise, it did. All of the impressionable teens and pre-teens lined up for a view of Edward Cullen and Jacob Black, the two love interests in this infamous love triangle.

RELATED: The Winchesters: How The Supernatural Prequel May Fix the Series’ Most Toxic Problem

However, the Twilight boys were far less than dreamy — they were downright toxic. Just take a look at some of their actions. Before diving into what exact behaviors are cause for concern, let’s uncover some general themes that we’ll address. Underage grooming, depression, codependency, manipulation and sexual assault are the focal points of discussion.

These are serious accusations to hold against some fan favorites. How could we have been blind to all of this misconduct in The Twilight Saga? The books and films targeted an audience that was unable to connect the right dots: teens. The character presented alarming behavior, but followed up with lust, want and compassion. Teens are vulnerable and malleable, especially to what they view on-screen. Rather than use these problematic instances to help readers and viewers recognize the patterns of abuse in a relationship, they were instead fetishized and fantasized.

How Edward Groomed Bella in The Twilight Saga

Edward and Bella were top-tier relationship goals for a generation. Most Twilight fans were on “Team Edward,” which makes sense, because their storyline follows that of Shakespeare’s Romeo and Juliet. Fans rooted for the star-crossed lovers with a seemingly impossible obstacle to overcome. However, it’s arguable that some of those conflicts should not have been overcome but, rather, served as breaking point for Twilight‘s “one true pairing.”

RELATED: Robert Pattinson Refused to Do One Dangerous Thing for The Batman, Calling It ‘Part of the Problem’

Although he appears to be 18 years old, the vampire Edward Cullen has walked the Earth for more than a century. The mortal Bella, by contrast, is 17 years old, physically, mentally and emotionally. That isn’t an age gap that can be glossed over, by any means.

Edward has the intelligence and experience that Bella lacks, which permits him to manipulate the teenager easily and quickly, which contributes to their fast-moving relationship. This is a story we’ve heard all too many times, about an older person grooming a minor. However, Edward’s status as a “hot vampire” helped to brush the real, and really troubling, issue under the rug.

Bella and Edward’s Break-Up Led to Depression and Suicide

The next theme is Edward and Bella’s codependency. By the second film, New Moon, Bella is completely immersed in Edward’s life. She doesn’t have any friends outside of Edward and his family, which is extremely dangerous. It also leads to the depression/suicide situation that follows.

After Edward decides to leave Bella for her own safety, she falls into a severe depressive state. We also can’t overlook the cruel way that Edward abandoned her. It turned Bella into a sobbing mess in the middle of a forest.

RELATED: Robert Pattinson Handled Being Cheated On By Kristen Stewart In A Surprisingly Mature Way

Bella’s depression was romanticized, and viewed as the ultimate heartbreak. In reality, it was crippling depression resulting from Twilight‘s most toxic and codependent relationship. Bella’s depression becomes so all-encompassing that she begins to hallucinate Edward every time she places herself in danger. That leads to Bella jumping off a cliff in the ultimate sacrifice to see her former lover (she claims it wasn’t a suicide attempt, but it definitely was).

In true Romeo and Juliet fashion, Edward catches wind of Bella’s desperate, and believes she’s dead. That leaves him no other option than to go to the reigning family of the vampire world – The Volturi – and ask to be killed as well.

In short, the two would rather die than be apart. There’s no need to further unpack why that’s a problem.

Why Edward and Bella Should Never Have Been Together

You can’t talk about The Twilight Saga’s toxicity without discussing how Edward stalked Bella. He knew where she was, and who she was with, at all times by intrusively listening to the thoughts of others. As if that weren’t enough, he would go so far as to sneak into her bedroom and watch her sleep. It should be quite obvious as to why this is both creepy and chilling.

RELATED: What Happened When Kristen Stewart Broke Free of Twilight

The last point of contention which needs to be brought into light is Bella’s need to change herself to be with Edward. If we dissect the actual plot of Twilight we can see that it’s about Bella’s journey to becoming a vampire. Bella says that she wants to become a vampire, but let’s examine why she wants this.

The stress of Edward never getting older while Bella will grey and age without him is a main motivating factor in her decision. This is a superficial worry which makes sense considering that Bella is only 17 years old. The other worry is about Edward or his family hurting her. After Jasper’s attempted attack on Bella during her birthday party at the Cullen’s in New Moon, Edward puts it in Bella’s head that as long as she’s human, he can never be with her. This is yet again a manipulation tactic to control Bella. And unfortunately, Bella is heavily influenced by this and it drives this desire to be a Vampire even further.

Why Jacob Black Was Just As Toxic in The Twilight Saga

Our exploration of Jacob Black may not be as in-depth as Edward’s, but that doesn’t mean they’re not equally abusive. In fact, Jacob had three disturbing instances that have to be discussed. The first one is his sexual assault on Bella.

After Jacob admits in Eclipse that he loves Bella, she tries to tell him that, despite his feelings, he’s not the guy for her. He never has been, and he never will be. Bella was clear it would always be Edward. However, Jacob deludes himself into believing Bella loves him, too. He can’t seem to comprehend otherwise, and kiss Bella without her consent. She very obviously struggles against him.

RELATED: The Toxic Relationship That Made Millie Bobby Brown Quit TikTok – And How She Rose Above It

Jacob later tells Bella that, if she doesn’t kiss him, he will kill himself. In desperation to stop Jacob, Bella relents, despite being engaged to Edward by this point. Jacob manipulated her into kissing him for the second time, even after she expressed that she doesn’t want to, and that she’s engaged to someone else.

If isn’t enough to demonstrate that Jacob is a destructive person, we have a few more examples. Over the course of the series, Jacob tells Bella he wishes she were dead. He repeatedly says her death is preferable to her being with Edward or becoming a vampire. This is far more than anger. It’s an extremely malicious emotional attack.

RELATED: What Happened to Taylor Lautner? The Twilight Heartthrob Who Disappeared Overnight

Lastly, are his ultimatums, which are a way of gaining power over another person. By forcing them into a decision they aren’t ready to make, you’re intimidating and threatening them. Jacob does this multiple times, making Bella choose between him and Edward, between their friendship and her relationship. This is emotional abuse, because Jacob is stunting Bella’s ability to express herself, or else discrediting her decision if it doesn’t meet with his approval.

What Can We Learn From Twilight’s Toxic Pairings?

We thought The Twilight Saga was a romantic fantasy, but it’s starting to feel like it belongs in the horror genre.

It’s interesting that it’s only in recent years that people have begun to question what we thought we felt about the relationships we saw on-screen. Is it because the audience has grown up and matured enough to realize how horrible these relationships were? Or perhaps it’s because more women are open to telling their stories of abuse, and how emotional abuse is just as traumatic.

This new analysis of Twilight has given insight into the red flags we should look for in our own relationships. In the past, we’ve been divided into Team Edward and Team Jacob. Well, we’re officially saying we’re Team Bella — and you should be too.

It Takes One Person To Make You Feel Like You Matter | Kyle Scheele Inspirational Speech | Goalcast
Four Priorities for Talent Acquisition Leaders in 2023 (i4cp login required)
Watch the Breathtaking Moment a Family Finds Their Missing Son Lost at Sea as Part of Viral Rescue Mission
Sweet Revenge: Woman Wins Lottery Jackpot After Husband Leaves Her for Best Friend
Waitress Soothes “Fussy and Teething” Baby So Mother Can Finish Her Meal