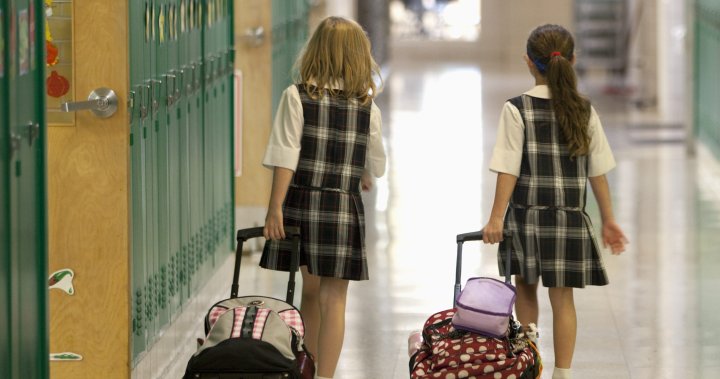 Your kids might now have a more legitimate reason to complain about their uniforms: a new peer-reviewed study has discovered high levels of toxic PFAS in stain-resistant school uniforms across Canada and the U.S.

PFAS (per- and polyfluoroalkyl substances) are commonly found in children’s clothing to make the fabric water- and stain-resistant.

According to the Environmental and Science Technology journal, which published the study this month, the chemical fluorine was found in 65 per cent of all school uniforms, bibs, hats, stroller covers and swimsuits that were tested. The level of PFAS found in school uniforms was “significantly higher” than any other item of children’s clothing, the study claims.

Often called “forever chemicals,” PFAS do not naturally break down. Rather, they have been known to accumulate both in nature and the human body.

PFAS have been linked to cancer, kidney disease and several other serious health conditions. They can be absorbed into the human body through one’s skin, inhalation or ingestion.

Children are especially vulnerable to PFAS because of their smaller body mass and still-developing organs.


There are thousands of man-made substances that qualify as PFAS, many commonly used as surfactants, lubricants and repellents, according to the Canadian government.

The study tested stain-resistant uniforms from nine “popular brands.” Of all the clothing examined, uniforms made from 100 per cent cotton contained the highest levels of PFAS (though cotton spandex and cotton polyester uniforms also contained the forever chemicals).

Here’s what we know about PFAS, the toxic chemical found in Canada and U.S. cosmetics

In Canada, 20 per cent of public schools required students to wear uniforms during the 2017 to 2018 academic year. Uniforms are most commonly required in low-income elementary schools, Catholic and private schools.

University of Toronto professor Miriam Diamond, a co-author of the study, said that parents of children who wear uniforms should avoid “stain-resistant,” “weather-resistant” or “waterproof” lines of clothing.

She also urged parents to speak with their children’s school about using PFAS-free products.

“I don’t know any parent who values stain repellency over their child’s health,” Diamond said.

It’s unclear how many children across Canada are affected by this study’s findings, but it could easily impact hundreds of thousands, with more than 200,000 Canadian kids attending private school alone.

Son Reunites With Birth Mother After 20 Years — Realizes They Worked at Same Hospital
Must-See Motivation Speech: How to Find True Happiness From the REAL Jerry Maguire (VIDEO)
How I Stopped Feeling Embarrassed and Ashamed of Being Single
In Honor of Groundhog Day: 5 Hilarious Times Bill Murray Made Someone’s Day a Little Extra
Garmin Canada announces Alberta expansion despite other tech turmoil