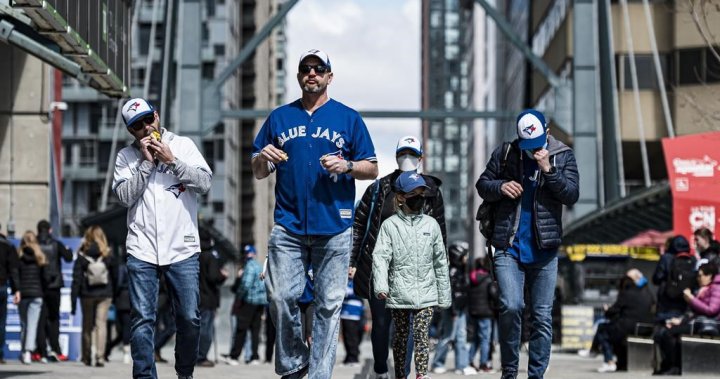 A clinched playoff spot with home-field advantage for the Toronto Blue Jays will bring a much-needed boost to businesses in Toronto and across Canada this fall.

The best-of-three American League wild-card series is set to take place at the Rogers Centre starting Friday after the Blue Jays secured the top seed on Monday.

Business more than doubles during this kind of event, said Paul Bognar, president of Service Inspired Restaurants, which owns multiple restaurants near the downtown ballpark.

After more than two years of subdued business due to COVID-19-related restrictions, he said restaurants will appreciate the fall uptick in sales from baseball fans.

When he realized the Blue Jays had a chance at a playoff run in the city, Bognar said his first thought was that it would be welcome news for the company’s four restaurants and bars along Front Street: The Loose Moose, Scaddabush, Jack Astor’s and Duke’s Refresher.

“With what we’ve been through for the last almost three years ? this is big for us,” he said.

The Blue Jays last made the playoffs in 2020 but pandemic-related restrictions did not allow for any at-home games.

The last time Toronto played a post-season game at the Rogers Centre was 2016, when they won the wild card spot and the division series before losing to Cleveland in the American League Championship Series.

Boston Pizza’s Front St. location sees sales as much as triple when the Blue Jays have a playoff game at home, said spokesperson Marian Raty in an email.

When Canadian teams do well in the Big Leagues, certain industries benefit. For example, revenue from what Statistics Canada calls the spectator sports industry grew by 8.7 per cent to $3.8 billion in 2019, attributing the bulk of that increase to the Raptors’ successful NBA championship run.

Businesses in event promotion and arts and entertainment also saw a boost that year, which saw a record number of tourists visiting Canada.

Chris Bloore, president and CEO of the Tourism Industry Association of Ontario, called this the “Raptor bounce.” And it’s not just in Toronto: bars and restaurants across Canada were filled with fans watching the Raptors’ historic run, he said.

That’s because the Jays and the Raptors are seen as national teams, said Andrew Weir, executive vice-president of Destination Toronto.

“When it comes to baseball and basketball, the Raptors and the Jays really are Canada’s teams,” he said.

There will be an immediate benefit to bars, hotels and other businesses in Toronto, Weir said, but in the long run, these type of events will serve to market the city as a destination for future travel.

James Rilett, vice-president of Central Canada for Restaurants Canada, said restaurants and bars didn’t see the return to pre-pandemic traffic and profit they had hoped for this summer and a boost from the Jays’ playoff run could serve as a helpful bridge into the busy holiday season.

Bognar said many sports fans come to the bars along Front Street for pre-game and post-game beers, or to watch the game if they weren’t able to snag a ticket. Beers at the Rogers Centre run a pretty penny compared to a pint at a nearby bar, he said.

For that reason, he said, “We see a lot of pre-game participation in beer drinking.”

Over the years, Bognar has also noticed that hockey and baseball fans seem to drink more beer than basketball fans, making this particular playoff run extra welcome for the business.

While his restaurants have been inching back toward pre-pandemic customer traffic, he’s hopeful the Blue Jays will tip them over the edge.

“That’d be the first time we’ve seen that kind of a return in quite a while.”