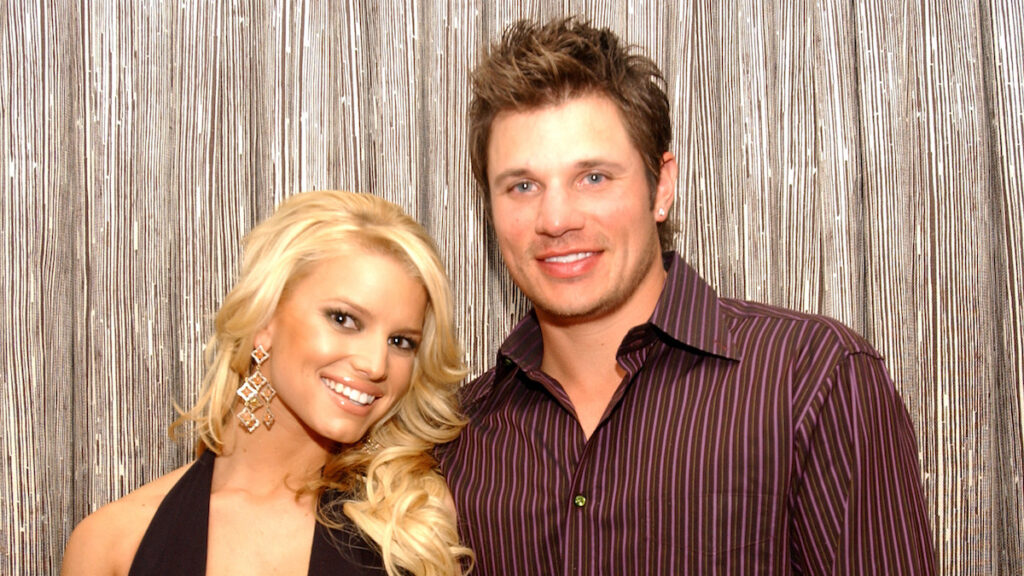 Jessica Simpson and Nick Lachey appeared to have the perfect marriage, which they put on public display on MTV’s Newlyweds: Nick and Jessica. For three seasons, starting in 2003, they gave fans an inside look into their seemingly blissful union, but their partnership wasn’t picture-perfect.

The pair met when Simpson was just 18 and, as she would later tell The View, her youth played a part in their separation. “He was eight years older than me; I had a lot of learning to do to really be at the place where I could be a wife,” she said on the show. But their problems stretched beyond the age gap. “I couldn’t stay in something that felt destructive, and I needed to be free to be myself,” she confessed, explaining why she chose to file for divorce in December 2005 after just three years of marriage.

Simpson has been adamant that she has no regrets about her relationship with Lachey, calling the 98 Degrees alum her “first love” and writing in her 2002 memoir, Open Book, that she believes “Nick was meant to be my husband,” but even so, she was forced to learn a tough lesson at just 22: “Love is not enough,” she wrote. “If love was enough, I would stay forever. But it isn’t enough. We have to like each other. We have to be friends.”

Jessica Simpson and Nick Lachey struggled behind the cameras

While Jessica Simpson and Nick Lachey were busy “pioneering our way through reality television,” their life off-camera was beginning to fray. As the “With You” singer reminisced in her memoir, “We worked and we were great at it, but when it came time to being alone, we weren’t great at it anymore.”

Opening up about their marital struggles, Simpson recalled how they grew apart until they were no longer on the same page. “There was something Nick wanted from me that I no longer had, an emptiness I couldn’t fill, and neither could he,” she wrote, adding that a lack of communication only made things worse. “We were not one of those couples that screamed at each other, let whatever fly out of our mouths, and then make mad, passionate love,” she confessed, revealing, “We would yell at each other, and then he would go out with his boys and not answer the phone.” Then, when she would “accuse him of having wandering eyes,” he would “rip into me, making sure I knew I was the one causing the problems in our marriage.”

It was that toxic dynamic that eventually pushed Simpson to walk away, even though she believed their “marriage would never end.” As she later told Glamour, it was “a heart-wrenching thing to go through,” but the right thing because there’s no shame in prioritizing your own personal happiness. Comparing her divorce to “a death in the family,” the singer-turned-fashion designer recalled having to go through “the mourning stage, then the rebellion, and then all of a sudden you have to find life by yourself. Once you do that, you feel complete — and that’s the only time you can truly fall in love again, and give yourself over completely to another person,” she shared.

“Love and obsession are so different”

Once her divorce from Nick Lachey was finalized and she had the time to grieve the end of her marriage, Jessica Simpson found herself ready to date again, but her on-again, off-again romance with John Mayer would come with its own tough lessons.

The pair first got together in 2006 and, although they openly gushed about their connection, Simpson later conceded that while they “were great at intimacy” and “great at loving each other […] the relationship was very complex.” Initially, she was drawn to the fact that Mayer was completely different from her ex. As she shared in her memoir, “I would get up to go to the bathroom, and John would ask, ‘Where are you going?’ While I was married, my ex-husband couldn’t be bothered to figure out what city I was in.” Admitting that “it felt safe to be desired,” she continued, “I know John would never cheat on me, and that confidence was a new feeling for me.”

However, that strong connection would soon turn unhealthy as Simpson began to feel anxious in their union. “I constantly worried that I wasn’t smart enough for him,” she wrote, explaining how “he was so clever and treated conversation like a friendly competition that he had to win.” Her insecurities became so strong that she had friends checking her text messages to Mayer for typos and that eventually spiraled into greater self-destructive behavior. “My anxiety would spike and I would pour another drink,” she confessed. “It was the start of me relying on alcohol to mask my nerves.”

They eventually split in 2007 and Simpson dated Dallas Cowboys quarterback Tony Romo for two years, but when that ended (because Romo saw his girlfriend getting a text from Mayer), her ex quickly swooped back into her life. And delivered “a punch in the gut.” As she wrote in her memoir, “He had said all these things, practically asking my parents for my hand in marriage while I was in a serious relationship. Swearing to me up and down that he was a changed man. Now here I was, ready to pledge my love back, and to kiss him as the curtain came down. And it fell on my head.”

Finally, it was her therapist who told her the harsh truth she needed to hear: “He never loved you. He was obsessed with you. Love and obsession are so different. One is healthy, one is not.’” That’s when Simpson realized that a passionate relationship can also be a failing one. “Every time John returned, I thought it was a continuation of a love story, while my friends saw a guy coming back for sex with some foolish girl,” she recalled.

The right connection will set you free

Once Jessica Simpson and John Mayer split for good, other relationships and flings followed, but it wasn’t until 2010 that the singer finally found what she was looking for. That was the year when a mutual friend introduced her to NFL tight end Eric Johnson and everything changed. Sharing how she “fell head over slippers in love with this perfect man” at first sight, she recalled how on their first date “he knocked on my dreamy cottage door (sigh), I let him in and never let him leave.”

Calling Johnson “a very selfless and loving person,” Simpson revealed that she “never had that kind of connection” with any of her exes and told Us Weekly that their union works because “I have never felt more myself or more free. Eric and I have a true mind, body [and] soul connection,” she gushed, adding, “Some of the things he loves most about me are my flaws.”

The couple got engaged after just six months of dating, but didn’t tie the knot for a while, as they welcomed daughter Maxwell in 2012 and son Ace in 2013. Daughter Birdie followed in 2019, but not before they finally walked down the aisle in 2014. Opening about their special day, Johnson told People his “heart was exploding a little bit” while Simpson gushed about their connection getting stronger after marriage, saying, “I just think we’re a little bit more addicted to each other. I just think there is a level of love that has reached the highest of high.”

Now, 11 years later, Simpson and Johnson are still basking in what she calls an “unconditional, passionate, inspired, fascinating, supportive, beautiful, tempting, ravishing, exquisite, sublime, marvelous, honest, happy, adored, ideal, incomparable, powerful, mesmERIC, LOVE.” Celebrating their anniversary on Instagram in May 2021, the entrepreneur told fans that their love was simply meant to be. “I knew the night we met, the fate of you, locked the key to my searching heart and simply held my soul with love and honor,” she wrote.

It’s a sentiment she shared again that September while celebrating her beau’s birthday. Taking to Twitter, Simpson enthused that she knows “without a doubt” that “God created and shaped you to be my purest love, truest companion, my forever person, my ALL in everything, my everyday and night answered prayer before I even knew the words to speak.” She continued, “I truly was born to love you. As a child I talked to God asking for you and you found me when my heart least expected eternal intimacy,” she added, concluding, “I am graced to be living within your soul and you within mine until the end of time.”

Jessica was brave enough to give love another chance

As Jessica Simpson’s road to eternal love shows us, you need more than a strong connection for a union to last. As the singer learned at an early age, people change and love simply isn’t enough to fix a partnership in which both sides have grown apart. What’s more, a passionate union doesn’t necessarily signify a healthy one. In both cases, there is nothing wrong with putting yourself first and walking away from a relationship that simply isn’t working — no matter how difficult that may be. Because in the end, the right partnership can only come into your life if you’re free and open to receiving it.

Be courageous enough to love again

Walking away from someone who doesn’t value you leaves room for the person who will.

Looking for love? 44% U.S. adults use dating apps to find long-term partners: study
Deliveryman Arrives to Pick Up an Order From a Bakery – Breaks Down When He Finds Out Why His Own Name Is on the Package
He Was Fatally Beaten by Memphis Police — Now People Around the World Are Sharing #SunsetsForTyre in His Honor
Femcels: Inside the enigmatic subculture of involuntary celibate women
Podcast: What to know about “novelty hunting.”