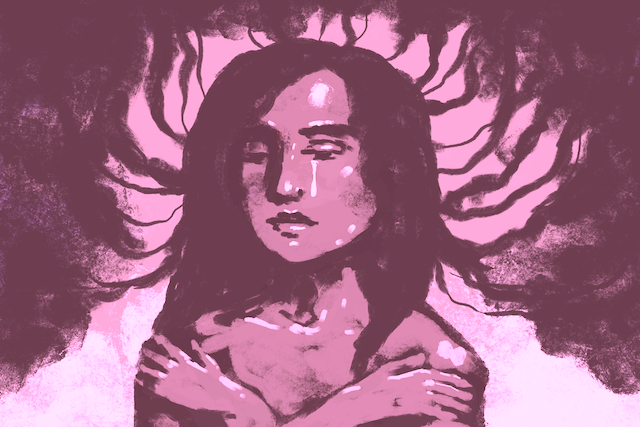 TRIGGER WARNING: This post deals with accounts of sexual harassment and assault and may be triggering to some people.

“There can be a deep loneliness that comes from not having a family that has your back. I hope you can find supportive people who show up for you.” ~Laura Mohai

I feel and have felt extreme sadness, anger, isolation, and fear over several sexual harassments and assaults in my life.

The first time I was sexually assaulted I was seven. I was at a friend’s birthday pool party. My friend’s dad put his hand down my swimsuit and grabbed my undeveloped chest, then said that once “these” grow, I’d be irresistible and a hot f*ck. I was seven.

After that, my stepfather bought the first pair of “sexy” underwear I ever had, when I was ten, and made me model them for him, among other things.

From these early formative experiences, I wanted to hide from the world.

I was sexually harassed and assaulted numerous times by a “valued” community member. Mr. S was my band director during my junior and senior years of high school. His behavior with me during my years as a student was completely inappropriate. He should be in jail. Yes, jail. I am certain I am not the only female who experienced his advances.

Mr. S, as the students called him, preyed on the fact that I was very naïve and beaten down, came from a single-parent household, didn’t have much of a relationship with my father, and wanted to be a professional musician.

My senior year of high school, I had early release but didn’t have a car. My mom worked, so I often had to stay very late after school to wait to be picked up. I would go to the band hall to practice during early release. Every single day, Mr. S would hide my clarinet somewhere so I’d have to come and ask him where it was. It was his way of making sure he got to see me, to control and harass me.

He would leave lengthy typed “love” letters and lifesavers in my case every day. I was appalled. I told him to please stop. I never reciprocated and did not want this kind of attention. I just wanted to practice my clarinet, and he knew this, but preferred to toy with me.

Before he would “allow” me to take my clarinet from him and go practice, he would make me sit with him in his office. He would pull his chair up to me and sniff my hair, telling me to never change my use of Finesse shampoo, as he associated me with that “lovely” smell.

He would ask me if I read his love letters, and then he’d pester me as to why I never replied or reciprocated. I was very shy and didn’t say anything. I was scared. I felt ashamed, though I didn’t do anything wrong. I was embarrassed and knew many kids noticed that he gave me “special” attention, and I hated it.

He controlled when I could leave his office. He knew I had no transportation of my own, so if I tried to leave to go to a practice room or to the library, he would tell me that I couldn’t because I still had lots of time to be with him.

He would sometimes help me with my music, as it appeared that I was just in his office for that purpose. It wasn’t. He was obsessed with me. I am now closing in on middle age, and until last night, I had never told anyone that he used to come to my Spanish class and pull me out to take me places. How this was allowed, I will never know.

Mr. S would tell my Spanish teacher that I had Drum Major duties, and that it was urgent, and then she would allow him to whisk me away. I hated it.

He would often take me to Lake Lewisville, where he and his wife owned a sailboat. He would make me get in the boat, and then he would tell me how he wanted to sail the world with me. Again, I was silent. I was afraid.

He would force me to sit leg-to-leg with him and would kiss my cheek, putting his arm around me. I would sit there like a statue, then I would try to pull away, but he would forcefully pull me back and tell me that it was mean to deny his advances and affection.

Typing this now makes me want to vomit. It’s repugnant. The woman I have grown to be would never allow this behavior. However, I was sixteen and had no guidance and not much self-esteem.

Looking back, I cannot understand how a man who had a wife and three daughters could be so disgusting, cross so many boundaries, and be so creepy.

The time he crossed the line in the most extreme way was when he pulled me to him, held me next to his body, and forced a mouth-to-mouth kiss on me, while pressing his hard-on into my stomach, in San Antonio at All State. I was terrified, and pulled myself away from him, ran back to the hotel, and cried the entire night.

I wanted someone to rescue me from his nastiness. “Can’t everyone tell he’s a creep and I’m miserable?” I would think to myself.

You are probably thinking, “Why didn’t you tell someone?” I was afraid. He brainwashed me into thinking that if I told anyone, he wouldn’t write any recommendation letters for me and no one would believe me (I know this is not true now). And he would remind me that I didn’t want to stress out my mom, who already worked a lot. He guilt-tripped me and shamed me.

It wasn’t until college that I eventually told someone, a childhood friend who attended the same school I went to. I showed him the letters Mr. S had written and told him about it. My friend was livid and then threw all the letters away. (I now wish I had kept the disgusting letters so that I could have them published.)

Mr. S would call me at college and tell me he missed me. I told him to never call me again, but he continued until I stopped picking up the phone.

Mr. S was a child predator who never should have taught children. He tried to Facebook friend me several years ago. I immediately shut that down. The gall, the nerve. No shame, no conscience. I am tired of being silent. I will not spare his peace to keep this quiet any longer. I can only imagine how many other teenagers and young girls were forced to be at the mercy of his sickness. I will be silent no more.

The above abuses and others caused my judgment to be clouded and for me to take routes that weren’t always best for me. For example, I turned down a full scholarship from Baylor University to attend Eastman because I was terrified of my stepfather and Mr. S. I wanted to get as far away as possible from them. I jeopardized my financial future by taking out loans to pay for flights and college in order to escape Texas.

I have beat myself up too many times over some of my poor decisions and my methods of survival. I won’t continue to vilify myself for finding ways, good or bad, to try to be and feel safe. I did the best I could, and I can now see that I am proud of myself for surviving. As a child and as a young adult, I should have been protected, cherished, loved, and guided, but I received none of those necessities.

To those who have experienced abuse, who were not protected, who were not valued or cherished, you should have been. You matter. Find your truth. Abusers gaslight to disorient you. You are smart, you are brave, and you can proceed with life.

I give myself kindness and love now. You deserve that too. You should have had those things before, but now you must give them to yourself. Be your own biggest cheerleader and know you are not alone.

Cora grew up in Texas and now resides in CO. She is a classically trained former symphony musician who now works in the corporate realm. Writing, hiking, spending time with animals, and volunteering are a few things she enjoys. She believes that many, unfairly and ignorantly, assume that all parents love and support their children. She hopes to bring hope, community, support, and resources to those who do not have the love and support that they deserve.

Waitress Soothes “Fussy and Teething” Baby So Mother Can Finish Her Meal
Haute couture goes ‘surreal’ and upside-down at Paris fashion show
How to Un-Stub Your Toe on the Nail of Life | Eric Bailey Motivational Speech | Goalcast
Domino’s Employee Delivers a $12 Order – But the Unusual Tip He Received in Return Takes Him by Surprise
‘It was my heart’: Women with heart disease face barriers to care in Canada, report says