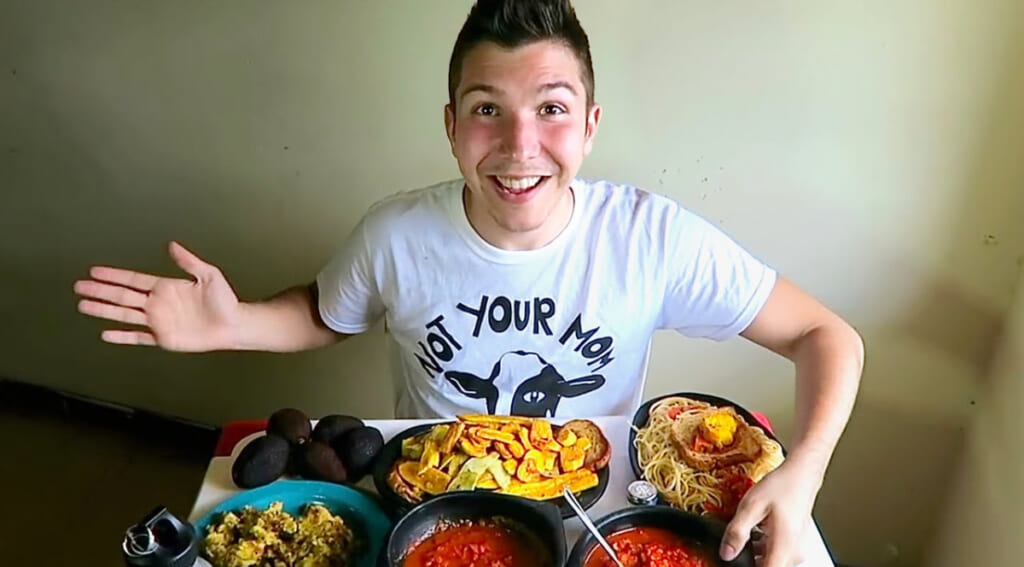 Nicholas Perry is more commonly known as Nikocado Avocado online. What started off as a platform for him to share his vegan lifestyle, turned into something dark and dangerous as a warning about mental health. Pre-YouTube, Perry was living in New York with dreams of playing in the pit orchestra for a Broadway show. Unfortunately, the competitive music scene wasn’t as profitable as Perry’s next career move.

RELATED: You’ve Seen It All over YouTube and Netflix but What Is ASMR?

Perry is now one of the most controversial YouTubers around, known for his extreme eating challenges and extreme mood swings. The real question surrounding Nikocado Avocado is when did things start to go wrong? This is a look at the rise and fall of Nikocado Avocado and how the dangers of social media contributed to his self-destructive behavior.

Nikocado Avocado’s Rise to Fame; Before and After

In 2014, Perry started his YouTube journey. At the time, he was vegan and had been for a long time. He confirmed in a later video that he and his husband, Orlin Home, first met on a Facebook group for vegan men.

But, it was only a couple of years later in 2016 when Perry posted a video saying that he longer wanted to be a vegan YouTuber or vegan in general. His beliefs on the topic quickly changed due to the vegan community, claiming that he’s “never ‘vegan enough’ [for them].” He also commented on this topic years later on The Dish with Trish, Trisha Paytas’ podcast. “I had a rotted tooth, a vitamin B-12 deficiency, and I developed hypoglycemia,” He told Paytas, “I don’t know if it was directly related to veganism but I’d never had it before.”

After puttingh his vegan lifestyle behind him, he started to gain popularity for his Mukbangs. Mukbangs were huge at the time and still have quite a large audience. Mukbang videos are of South Korean origins and consist of one or more people consuming massive amounts of food in front of a camera. Perry latched onto this extreme eating trend as his channel continued to grow through it.

The Decline of Nikocado Avocado’s Physical and Mental Health

As his subscriber count grew, so did the number on the scale. Perry was rapidly gaining weight, and he wasn’t shy about addressing it. With the ridiculous amounts of food he was eating, it’s not too far of a jump to assume he was eating above his daily caloric limit. But, with the extra fat also came the extra drama.

The melodramatic tales of Nikocado Avocado contributed to his quickly multiplying views. What started off as mindless drama ended up concerning a lot of his subscribers. He began to title videos “nobody likes me, I’m done” and “my life is falling apart.” He started to receive backlash from YouTubers he collaborated with. Stephanie Soo, another Mukbang YouTuber who did the Spicy Noodle Challenge with Perry made a video called “Why I Am Scared of Nikocado Avocado” where she addressed some alarming behavior that he demonstrated behind the scenes.

RELATED: How Emotional Health and Wellness Can Affect Your Life – And 7 Tips to Improve Them

His comment section began to fill with worry, rather than disdain. In January 2020, his already questionable mental health status raised red flags. His video titled “We Broke Up” was hard to watch, to say the least. A very emotional Perry brought attention to the failing relationship between his husband and himself. He blamed YouTube and the drama. “All of your comments over the last month are seeping into his head,” Perry said, “He is questioning us as a couple. And it’s all because of YouTube.”

Perry followed up with seven videos that he posted within one week that had Perry sobbing in front of his audience. “Orlin left me, I hate myself, Goodbye youtube & life” was just one of those videos that disturbed many of his viewers.

His dramatic antics continue, and many questioned if it was truly an issue of mental health, or if the theatrics were just for views. Many became suspicious long before, but his April 2020 video titled “Jesus Is Coming Soon, He Spoke To Me” convinced fans he was just trolling. Losing the support of his online following seemed to make things worse. It seemed that the worse the comments got, the worse his videos got as well. Could this be a result of not knowing how to deal with all the negativity surrounding his social media pages?

It was undeniable that that point that Perry needed a break from YouTube, which he promised to do and never lived up to. Although, the worry for his physical health was still prevalent. He had mentioned that he weighed 320 pounds and said that it was “nothing to be laughing about anymore.” He never did take a break from YouTube, but rather took up Tik Tok where content production became quicker and easier.

RELATED: TikTok Star Has The Best Response To Bullies Who Think Her Relationship With Her Husband “Doesn’t Make Sense”

Perry began to make Tik Toks, using the platform to mirror and emphasize the themes that were already on his YouTube channels. He used his weight gain and emotionally distraught moods to keep his name in the public. His Tik Tok videos reinforced the idea that he was not psychically or mentally well. It was shocking to people who weren’t familiar with his YouTube career and were discovering him for the first time.

He’s had many hospital trips as of 2022, but nothing with conclusive answers about his health. Many fear that he isn’t taking the situation seriously as he continuous to joke about it. There are very few that still hold compassion for Perry, criticizing the way he conducts himself online and the dangerous message about health and food he preaches. Many believe that his unhealthy habits encourage binge eating and other forms of eating disorders.

Is Nikocado Avocado Capitalizing Off of Drama for Clicks?

While Perry’s YouTube career caused mayhem, his Tik Tok presence amplified it even more and ramped up the situation to new heights – and weights. We can blame the demise of Nikocado Avocado on many things, but analyzing the wider issue of the celebrity community on social media platforms, specifically on Tik Tok, is crucial in understanding its impact on mental health.

RELATED: Why We Need To Talk About Eminem Getting “Canceled” on TikTok

Many prominent figures may not have the support they need in their personal lives to deal with a quick rise in fame. This type of popularity completely alters your life, changing your dynamics, your income, your career, and day-to-day life.

Without proper grounding, it is difficult to navigate new waters such as internet fame, especially when it can be ripped away so quickly. New influencers are constantly popping up, creating an “out with old, in with the new” mentality surrounding online followings. If content creators can’t keep up with relevance and an inhuman pace of production to keep their names on trending lists, it’s possible for them to lose everything they’ve worked for.

It seems as though the Nikocado Avocado situation is following along those lines or trying to keep relevance through absurd headlines and content. This is a dangerous path for anyone to follow. It’s important to keep in mind that celebrities and influencers are people too, and they need compassion as much as anyone else – especially when it comes to both mental and physical health.

Waitress Soothes “Fussy and Teething” Baby So Mother Can Finish Her Meal
Deliveryman Arrives to Pick Up an Order From a Bakery – Breaks Down When He Finds Out Why His Own Name Is on the Package
Four Priorities for Total Rewards Leaders in 2023 (i4cp login required)
This Is What Self-Care Really Means, Because It’s Not All Salt Baths And Chocolate Cake
It Takes One Person To Make You Feel Like You Matter | Kyle Scheele Inspirational Speech | Goalcast