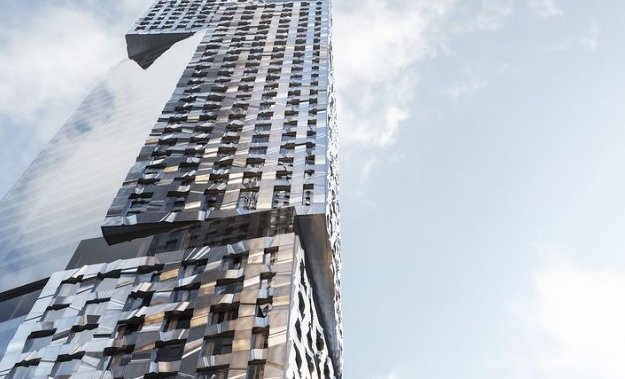 The team behind famed Canadian architect Frank Gehry‘s homecoming project, Forma, has released new renderings of the two residential Toronto skyscrapers and the plans are astonishing.

Forma marks Gehry’s first foray into residential towers in his home country and his tallest buildings in the world to date.

“There is a feeling of Toronto that I had as a kid, and I wanted that to be in the DNA of our design,” Gehry said in a press release announcing the new designs, adding that he was inspired by some of the city’s traditional architecture, including Osgoode Hall, University Avenue, the parliament buildings and the Royal York Hotel.

“Every city in the world has its own light and the light is modified by the buildings in the city. I wanted this building to capture the essence of Toronto. It’s not like everywhere else. The light is different. The heritage is different. It’s a different place. I hope that is what people see when they look up.”

The towers feature plenty of angled positioning, which will allow sunlight to reflect off various points of metal and glass throughout the day, giving it an almost fluid feeling. The team notes that this will “inject visual dynamism and movement onto the skyline.”

Located at the nexus of Toronto’s entertainment and financial districts at King Street West and Duncan Street, the east tower will stand at 73 storeys when completed, while the west tower will rise to 84 storeys.

This latest view of the Forma towers was shared this week by Great Gulf, Westdale Properties and Dream — the development team behind the project.

While much of the exterior will be encased by stainless steel and glass, the main lobby of the east Forma tower will feature a Group of Seven-inspired palette, with plenty of curved wood fixtures and limestone walls and flooring, tying in Canada’s natural landscape.

However, it’s the lobby’s ceiling fixture, something the team describes as an “architectural masterpiece,” that will command the most attention in the space. Rendered in copper and handcrafted by Gehry himself, hundreds of tiled maple leaves will attract the sunlight, replicating the movement of light on Lake Ontario.

Studio Paolo Ferrari, an internationally acclaimed designer, will oversee the design for the interior spaces, which will include many luxury amenities, such as a soundproof recording studio, a maker’s studio and a creator’s club co-work space.

“Our intention was to craft purposeful spaces that oscillate between social and serene,” Ferrari said in the press release.

“Toronto is an unrelenting, energetic city that, at the same time, also has incredible connections to the lake and nature. We wanted to capture a balance between the exuberance and the restorative.”

Future residents will also be able to enjoy a health and wellness spa, complete with a fitness studio, jacuzzi, sauna and spin room.

Finally, the 73rd floor will feature a hospitality suite available to residents that will include entertainment rooms, a small theatre, a chef’s kitchen and, of course, breathtaking views of the city.

Once completed (date TBA) the towers will be home to a total of 2,087 living units, from studio to three-bedroom plus den condos.

Gehry is considered one of the most influential contemporary architects in the world. Some of his most notable projects include the Walt Disney Concert Hall in Los Angeles, the Guggenheim Museum in Bilbao and Fondation Louis Vuitton in Paris.

Mom Learns Her Son Has Been Bullying Classmate – What She Does Next Shocks the Internet
Fetuses smile for carrots but frown for kale, new ultrasound study finds
‘She’s a wealth of knowledge’: Nova Scotia ‘Coupon Nannie’ offsets inflation
The Exhausted Extrovert: How I Stopped Worrying About How People See Me
[Free] Collective Trauma Summit: Creating a Global Healing Movement