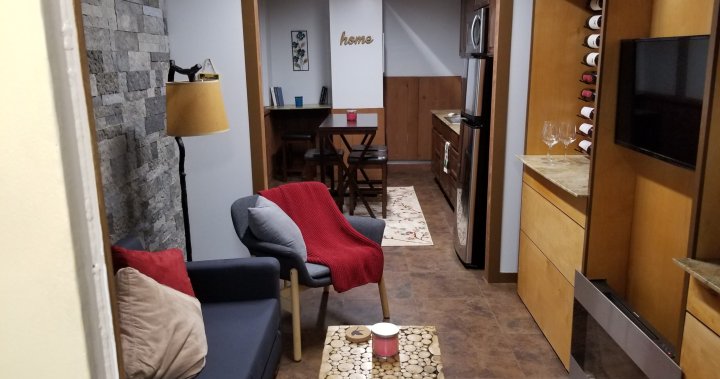 There’s nothing like a global pandemic combined with threat of a nuclear war to propel interest in fallout shelters and bunkers.

“Honestly, I’ve never seen anything like this in my life,” Ron Hubbard, a builder of survival shelters in Texas, tells Global News.

Hubbard’s business, Atlas Survival Shelters, is busier than ever, he says. Just a few weeks ago he was fielding quotes and requests for information on his product every one or two minutes.

Hubbard and others in the industry say they’ve noticed a dramatic upward trend in civilians worldwide requesting alternative shelters and fortified homes.

Brian Camden, owner of Hardened Structures in Virginia, says he’s been fielding about 150 per cent more inquiries since Russia invaded Ukraine at the end of February.

“We were at capacity before the Ukrainian invasion, but now business has just gone nuts,” he told Global News.

But don’t be deceived. While some fallout shelters look more-or-less like an uninviting shipping container stocked with the bare essentials, there’s been growing interest in a luxury product.

Hubbard says his company is increasingly offering shelters that are equipped with stylish furniture, master bedrooms, walk-in closets, and more.

“If you ever need the bunker, that’s going to be the end of the world as we know it,” he explains. “You won’t be able to pull your money out of a bank anymore, so the last thing you have on Earth might be your bunker.”

Camden says he’s always provided a luxury product — his clients tend to be very wealthy and are used to an elevated lifestyle, but he says he’s definitely received more interest in a basic product that still has modern, comfortable amenities.

“People know that if they need to use a fallout bunker or fortified structure, they’re probably going to be there for a while. And they want it to feel like home.”

And while there’s no doubt that the increase in demand has been fuelled by war and pandemic, Camden says there’s still plenty of other reasons people want a shelter.

“Asteroids, the antichrist, nuclear fallout, Armageddon — our team is not here to judge, but rather to find out the client’s priorities and make them our priorities,” he said.

Both builders said they’ve fielded plenty of calls from interested Canadians, mostly in the Western provinces, Ontario and Quebec.

“If you can afford to do it, why not have it?” Hubbard says, pointing out that — in the U.S. especially — people spend more money on health insurance per month than what an average bunker costs per month over one’s lifetime.

John Ramey, founder of The Prepared, a website advocating for “practical prepping,” told The Guardian that he, too, has seen a recent uptick in traffic to his website, with people interested in creating bunkers that could help them survive a nuclear blast.

“Our top on-site search terms have been ‘nuclear,’ ‘iodine,’ ‘emp,’ and ‘radiation sickness,’” he told the publication. “Those terms are normally nowhere near the top.”


Camden says there’s also been increased interest among those worried about what could happen in the aftermath of a nuclear event.

“The after-effect of one of those events would be food running out, water running out. The homes we design are all designed for that fallout,” he says.

Locked in time: Get a look inside Nelson’s Diefenbunker

It’s not just the survival shelter industry that’s benefitting from an emergency-preparedness mindset. If anything, trends seem to show that survival preparation is a booming business.

A National Geographic survey conducted in 2012, found that 62 per cent of respondents thought the world would experience a major catastrophe within 20 years. Another 40 per cent said they were stockpiling goods or building bomb shelters to respond to their fears.

And, according to The Guardian, the global market for “incident and emergency management” is expected to jump in value from USD$75.5 billion to $423 billion between 2017 and 2025.

Dr. Chris Ellis, a Cornell-trained expert on disaster preparedness, told the publication that the number of “resilient citizens” – a.k.a. people who could survive for 31 days or more in a self-sufficient state without access to food, water, fuel or power — is on the rise.

“In the face of threats and uncertainty, more people are clearly taking large-scale disaster possibilities seriously,” he said.

Podcast: What to know about “novelty hunting.”
This Year, Let Go Of The People Who Aren’t Ready To Love You
Four Priorities for Total Rewards Leaders in 2023 (i4cp login required)
14-Month-Old Girl Sees Clearly For The First Time in New Glasses (VIDEO)
I Have 2 Questions For You (Motivational Video) Fearless Motivation