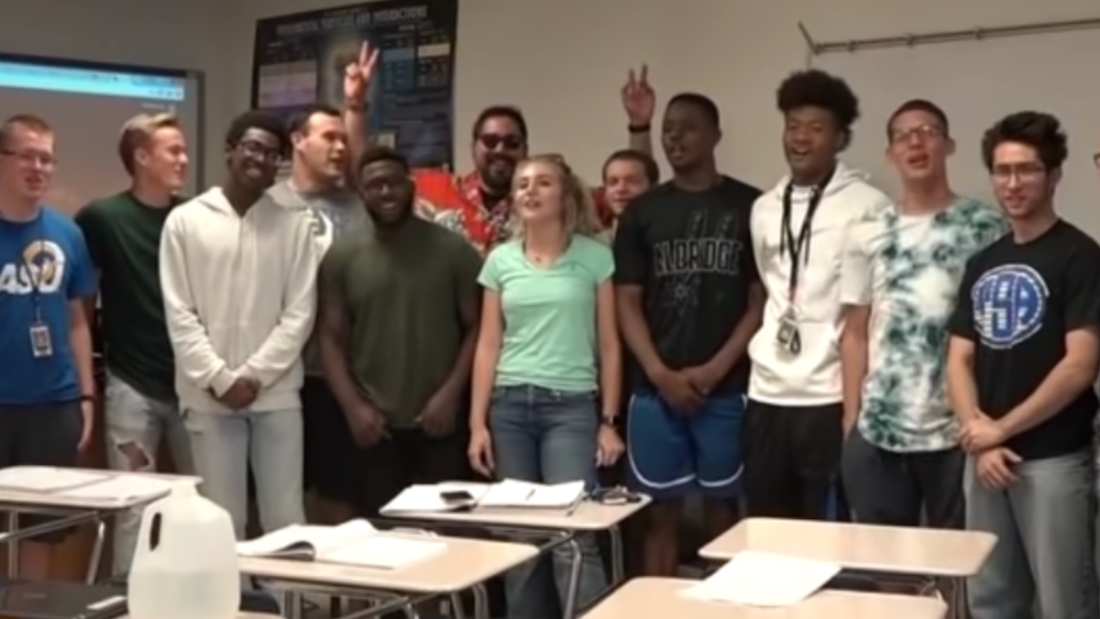 We all remember that one cool teacher who made learning fun. They have a passion for their subject that would turn on the most tuned-out student. According to Schertz-Cibolo-Universal City ISD student Piper Smith, Science teacher Roger Alcala is one of them.

“As a teacher, he enjoys his job,” she told KHOU. “And he enjoys teaching.”

But one day in class, Smith and her peers were paying attention to Mr. A for another reason. When they discovered the story behind it, their favorite teacher’s life would never be the same.

What Students Realized About Their Teacher That Changed His Life

Smith recalled that it all happened when Alcala was drawing with dry-erase markers.

“We have red and green markers, and we were drawing graphs, and he was like with this marker…” she began. “And we were like, ‘that one is green, you already used green for the last one.’”

That’s when Mr. A confessed to his students that he was colorblind. For his whole life, he was unable to see the colors green and red.

RELATED: Waitress Brings Firefighters to Tears With Her Selfless Gesture – They Pay Back Her Kindness in an Incredible Way

Smith said that the students were floored.

“So we were like, ‘no way,’” Smith recalled. “Because you don’t really hear about a whole lot of colorblind people.”

With the motivation to do something for their favorite teacher, the class came together to show their true colors with a gesture that he’d never forget.

Unknown to Mr. Alcala, his students put their money together to raise $400 to buy him special glasses so he could see the colors he was never able to.

It was a success, and the colorful moment was captured on video. In an instant, an amazed Alcala was finally able to see his student’s bright shirts along with the art that his own children drew on his desk.

RELATED: Indiana Man Shares a McDonald’s Table with a Stranger — Hopes to Have More Breakfasts Like This

“That is awesome, thank you so much guys.”

All of the sudden, the teacher literally became the pupil.

“And that’s the miracle. It happens instantly. It is all physics and science, because I am teaching them the physics, and they’re giving it back making my life better,” he said.

How One Teacher Showed That Teaching Is the Most Rewarding Job

You can count Alcala as the luckiest teacher alive. He sure does.

Imagine finally seeing the lovely lush trees, Christmas colors and Valentine’s Day hearts after seeing dark shades your entire life. Without question, a pair of frames has opened up a whole new colorful world for an adored teacher.

All of that might never have happened had Alcala not impacted his student’s world as he did daily. Yet by his showing passion for his students, they returned the favor at the first hint that he was in need.

One teacher made it clear to see that true success comes when you brighten the lives of others.

This Man Turned His Biggest Regret Into 1000 Acts of Kindness

Haute couture goes ‘surreal’ and upside-down at Paris fashion show
How I Stopped Worrying About Running Out of Time to Achieve My Goals
It Takes One Person To Make You Feel Like You Matter | Kyle Scheele Inspirational Speech | Goalcast
Four Priorities for Total Rewards Leaders in 2023 (i4cp login required)
Why I Didn’t Trust Myself to Make Decisions (and What If It’s All Okay?)