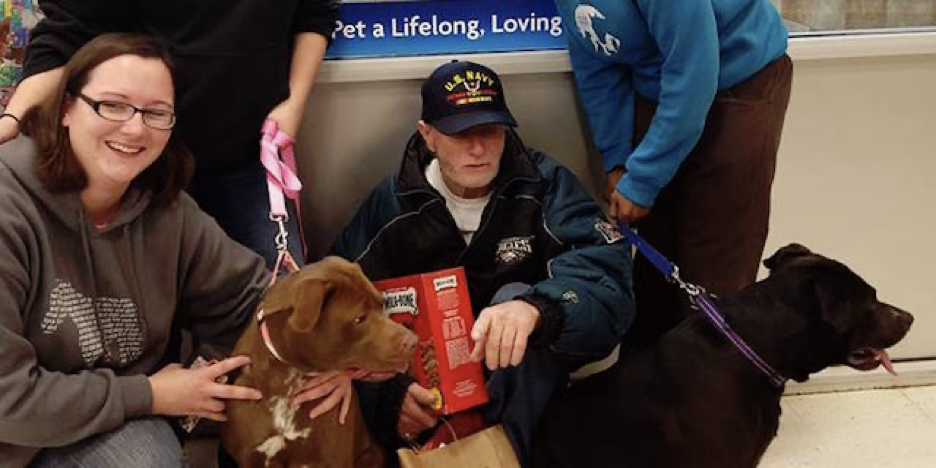 Tragedy begets tragedy. A veteran was forced to give up his two dogs during an extended hospital stay due to a massive heart attack. With no one to care for the dogs, the First State Animal Center and SPCA in Camden, Delaware, stepped in and picked them up.

The arrangement was meant to be temporary until the veteran got back from the hospital. But after just a few weeks, PetSmart sterilized the two dogs, Bailey and Blaze and put them up for adoption.

Thankfully even though Bailey and Blaze were well trained and healthy, they remained unadopted during their owner’s hospital stay.

As soon he got out of the hospital, the veteran visited PetSmart to get his dogs back but he could not afford the adoption fees of $250 full deposit.

Kindness Can Come From Unexpected Places

That night, staff members and volunteers from the animal center gathered together and pooled in money to help the poor man who gave so much to the country.

“This man was willing to sell his car to get the money,” Lindsay Carrothers the adoption counselor at the SPCA said.

The next day when he came to the store asking for some more time to arrange the adoption fees, the staff members shocked him with the news that the money was no longer an issue and that the dogs were now his.  The man was shocked and thought he misheard them. He thought he had truly lost his dogs forever but the staff members reassured him and gave the best Christmas gift he could ever have.

RELATED: Young Struggling Mother Can’t Afford Christmas Gifts for Her Kids – Then, a Concerned News Team Show Up at Her House

“They’re my dogs?” he asked before continuing, “I thought she was giving me the money back because I couldn’t have the dogs, and I couldn’t understand. She told me that the dogs are mine!”

“It had everyone in tears. You could just feel the love those dogs had for him. And there shouldn’t have been anything, especially money, that should’ve stood in his way to getting his family back.” Lindsay Carrothers said.

The staff members not only covered the adoption fees but also bought food, toys and other supplies that he would to take care of his dogs until he got back on his feet. The veteran was grateful to them and was overjoyed to be reunited with his family once again.

If Something Is Yours It Will Always Find Its Way Back

The infamous quote of letting things go that you love because they will find their way back to you fits perfectly well here. When something is truly yours nothing can take it away from you.

In this case you are the entire universe for your pup, so it will always find a way to come back to you. Give an extra love to your pup today and show them how grateful you are for their presence in your life.

The Best Christmas Gifts for Co-Workers, from Self-Development to Wellness-Focused

It Takes One Person To Make You Feel Like You Matter | Kyle Scheele Inspirational Speech | Goalcast
Beyond Dry January: 5 Benefits of Extending Your Break from Alcohol
The Choice We All Have , But Only a Few Apply It | Joe Dispenza
Waitress Soothes “Fussy and Teething” Baby So Mother Can Finish Her Meal
He Was Fatally Beaten by Memphis Police — Now People Around the World Are Sharing #SunsetsForTyre in His Honor