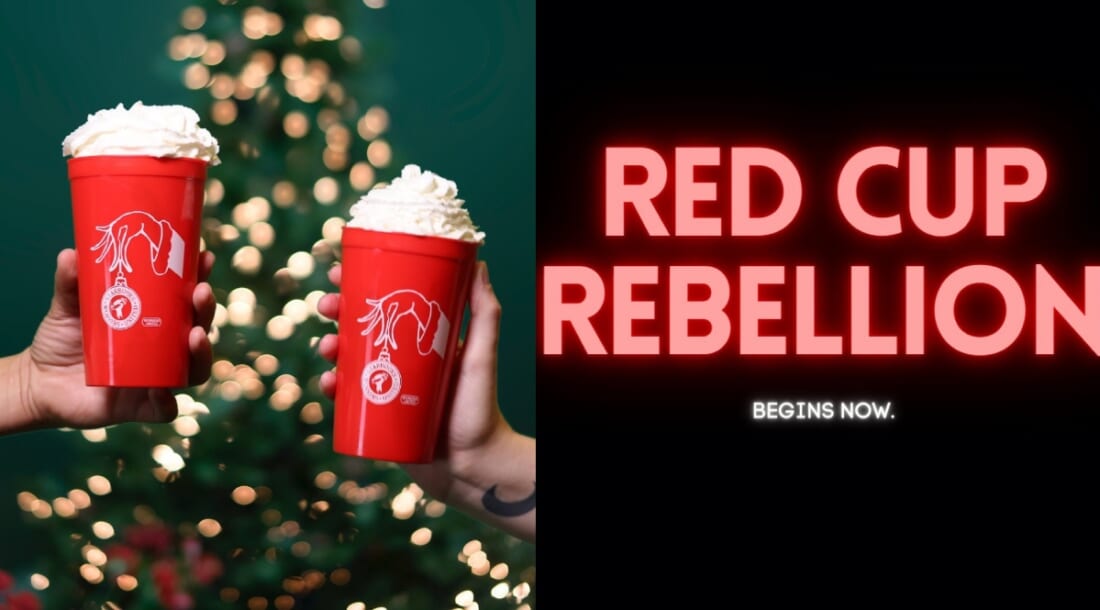 More than a thousand Starbucks employees have gone on strike.

What’s worse, workers of the popular American coffee chain have chosen one of the company’s busiest days.

On Thursday, members of the Starbucks Workers Union began picketing outside more than 100 stores across the country, calling it the “Red Cup Rebellion.”

Why Starbucks Employees Are Striking on ‘Red Cup Day’

The mass walkout was organized to coincide with “Red Cup Day” — a Starbucks holiday tradition, where locations hand out limited-edition reusable Christmas cups.

The red cups are considered to be collector’s items — especially for die-hard Starbucks drinkers. Customers line up outside stores in the early hours of the morning to get their hands on a red decorative cup. It’s one of Starbucks’ most profitable days of the year.

Workers at a popular New York City Starbucks location walked the picket line even though their store isn’t having a union vote until December 8.

RELATED: Starbucks Says It Has Achieved 100% Gender and Racial Pay Equity In the U.S.

Dozens of Starbucks locations opened to the public, using managers from other locations to help serve customers and pour drinks.

Staffing is one of the issues that Starbucks Workers United representatives say prompted the “Red Cup Rebellion” — a nationwide strike taking part in roughly 125 stores.

The walkout is intended to get Starbucks executives to bargain with employees in good faith as both sides try to negotiate new contracts, says CNN.

According to the union, Starbucks has fought back against union leaders in the past, including company lawyers walking out of bargain sessions and higher-ups making last-minute rescheduling requests that make it difficult for employees and union members to get their points across.

There are currently about 60 new bargain sessions coming up before mid-December.

“Starbucks thinks they can drag their feet in bargaining, and we’re here to show them we rebel against their tactics and we mean business – by shutting down theirs,” says a social media post from the union.

As of Thursday afternoon, the company did not release a comment relating to the nationwide strike.

RELATED: Deaf Man Goes to Same Starbucks Every Day – And Then the Barista Hands Him a Note That Shocks Him

In the past, the chain has denied any retaliation against its employees and the company has defended the firings of union supporters and employees, who it refers to as “partners.”

Earlier this week, the National Labor Relations Board — which oversees union representation votes — filed federal documents for a national cease and desist order to prevent Starbucks from retaliating against union supporters.

According to CNN, the NLRB filing said that there had been a “number and pattern of Starbucks’ unfair labor practices” against union supporters at its stores.

On Thursday morning, the Starbucks Workers United group shared a lengthy list of all participating striking stores on Instagram with a cheeky caption, “‘Tis the season.”

The group claims it has over 21,000 union supporters spread out across more than 250 Starbucks stores. Employees are demanding change and speaking up for their rights, causing other Starbucks workers to follow suit.

Hero of the Week: Starbucks Barista Delivers More Than Coffee When She Donates Kidney to Customer in Need

This Is How You Become the Best Version of Yourself in One Step | James Lawrence | Goalcast
Sweet Revenge: Woman Wins Lottery Jackpot After Husband Leaves Her for Best Friend
Deliveryman Arrives to Pick Up an Order From a Bakery – Breaks Down When He Finds Out Why His Own Name Is on the Package
It Takes One Person To Make You Feel Like You Matter | Kyle Scheele Inspirational Speech | Goalcast
The Choice We All Have , But Only a Few Apply It | Joe Dispenza