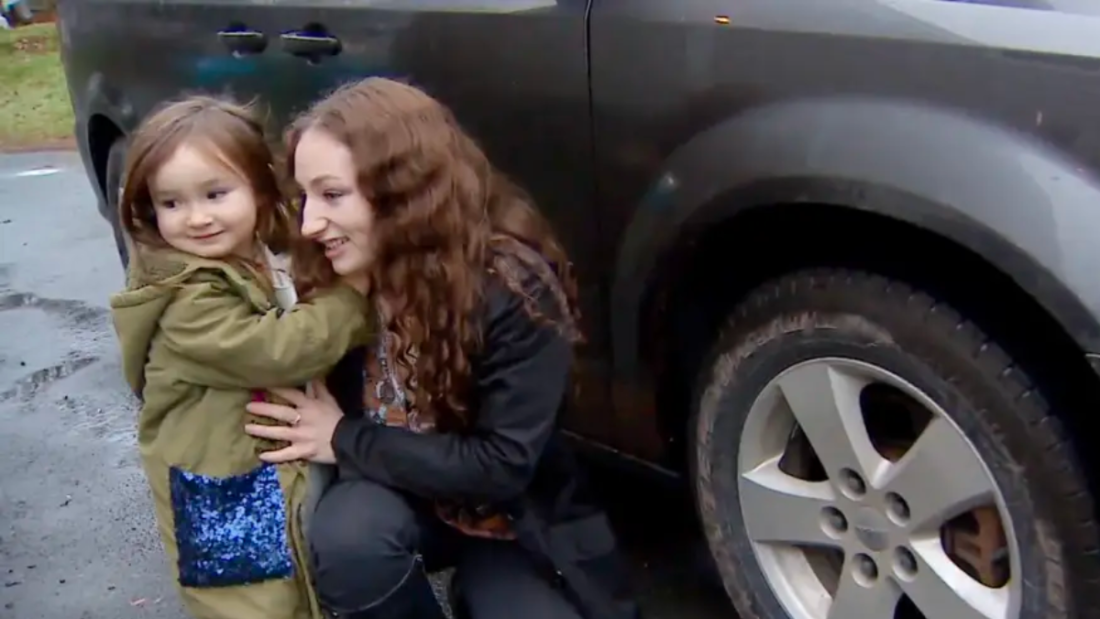 Kayli Metzler is always on the go. Between working full-time as an assistant manager at a local Dollarama and parenting four kids, she’s constantly on the road.

So when winter hit in her hometown of Sackville, Nova Scotia, she knew she needed to invest in some winter tires for her mini-van.

Unable to afford new ones, the struggling mom turned to Facebook Marketplace in search of a good deal on some used ones. What she got was anything but.

Not knowing much about tires, she purchased a pair of what she thought were good ones from a seller on Facebook. However, when she arrived at Star Tire in Sackville to have them installed, she received disappointing news — the tires were shot. They were so bad, in fact, that the shop refused to install them, citing major safety concerns. She started panicking. She needed those tires.

Kayli shared what happened next in a Facebook post on her personal page. And it turns out, when people say angels walk among us, they’re not wrong. A customer named Adrian just so happened to be in the shop that day, waiting for work to be completed on his own vehicle. When he overheard the employee delivering the devastating news to Kayli, he jumped at the chance to help.

“I think he had seen the van, seen the car seats, and knew I had kids, knew I was driving to Pictou and just couldn’t let me drive away like that,” Kayli told Global News.

RELATED: Daughter Falls Off Skateboard – The Brilliant Way Her Dad Reacted Should Be a Lesson for All Parents

He immediately offered to pay for two new rear tires. Kayli was shocked.

“So as one of the employees is explaining all of this to me, a complete stranger chimes in and immediately offers to pay for two brand new rear tires,” Kayli wrote on Facebook. “Refuses to take no for an answer between my sobs and thankyous tells me to have a seat and relax. His name was Adrian, and he’s an absolute angel.”

Adrian and Kayli spent a half hour sitting together and chatting. “He gave me some great advice on the van and made sure I knew to return to get my lug nuts tightened,” shared Kayli.

But the random acts of kindness didn’t stop there.

How One Random Act of Kindness Snowballed Into Another One

When the general manager, Murad Abdel Ghani, told his dad (who owns the shop) about Kayli’s situation and Adrian’s good deed, it didn’t take long for them to get in on the act.

They decided to replace the front tires as well. Free of charge.

Kayli had barely recovered from the shock of Adrian’s generosity when Murad delivered the news.

RELATED: Single Mom Expects 6-Year-Old Son to Do Household Chores – The Reason Why Is a Lesson for All Parents

“I come in and say ‘Listen, Merry Christmas, I know you just stopped crying and I hope you don’t cry anymore,” Murad told reporters. “But we’re going to give you two more tires. You really need them and this way you have four new tires, 20 lug nuts, no charge to you, and you keep the other two that came off for the summer.”

Kayli was blown away. She had never been to Star Tires before but now, she considers them family.

“The people that work here are saints and have treated me with so much love, I hope good karmas returns to them this holiday season,” she said. She also hopes that someday, she’ll be able to pay it forward.

Within a couple of hours, Kayli was back on the road, with four new tires and an even more precious gift — the reassurance that she and her kids were safe. All thanks to the overwhelming kindness of strangers.

Not only did a stranger’s generosity help a struggling mom in need, but it also acted as a catalyst for something even greater. Simply witnessing Aiden’s act of kindness was enough to inspire the shop owner to do something generous of his own.

All it takes is one spark to light up the world.

How I Stopped Worrying About Running Out of Time to Achieve My Goals
Mexico’s richest man lists $80M NYC mansion and it could break records
This Year, Let Go Of The People Who Aren’t Ready To Love You
Beyond Dry January: 5 Benefits of Extending Your Break from Alcohol
This Is What Self-Care Really Means, Because It’s Not All Salt Baths And Chocolate Cake