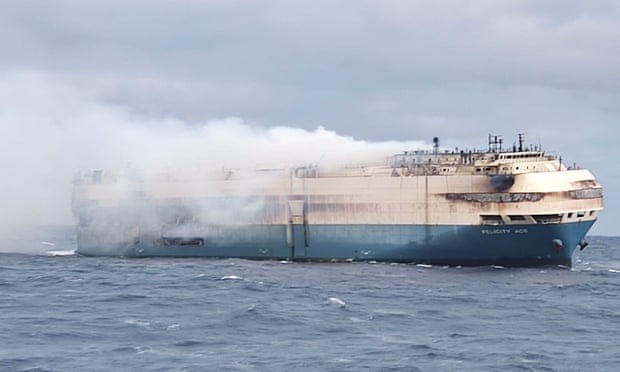 A cargo ship carrying thousands of luxury cars continues to burn in the middle of the Atlantic Ocean, but reports say the fire might soon flame out.

Last week, the Portuguese navy responded to calls of distress from the Felicity Ace after a fire broke out on one of its cargo decks and quickly spread.

The fire’s been burning for more than a week now, despite being sprayed down with water by tugboats this week.

Insurance experts at Russell Group told The Guardian that there’s an estimated $401 million worth of luxury cars aboard the ship, including Porsches, Volkswagens, Audis, Bentleys and Lamborghinis.

A ship full of Porsches, VWs and Bentleys is on fire, adrift in Atlantic Ocean

Mitsui O.S.K. Lines Ltd (MOL), the group that manages the ship, said in a statement the vessel was still on fire but stable, and that no oil leak had been reported so far.

The company also said that the anticipated tugboats will help ensure the boat doesn’t continue to drift farther away from Portugal’s coast.

“The fire has subsided in recent hours,” João Mendes Cabeças, captain of the nearest port in the Azorean island of Faial, told Reuters earlier this week, saying there was probably little combustible material left to burn.

He did say, however, that the lithium-ion batteries within the ship’s electric cars were likely “keeping the fire alive.”

“Our concern has been with pollution since the ship has large amounts of fuel on board and car batteries but so far there are no hotbeds of pollution,” Cabeças said.

He also told The Associated Press that the tugboats have avoided spraying water directly into the ship to avoid runoff from the batteries going into the sea.

The ship had left a German port on Feb. 10 and was scheduled to arrive at Rhode Island on Feb. 23, but the fire broke out on Feb. 16 and the ship was left adrift near Portugal’s Azores Islands last Wednesday.

The 22 crew members managed to escape on lifeboats and flee to a nearby Greek tanker ship before being taken to shore.

There is still no word on what caused the Ace to burst into flames, but officials say they are investigating.

He Was Fatally Beaten by Memphis Police — Now People Around the World Are Sharing #SunsetsForTyre in His Honor
Watch the Breathtaking Moment a Family Finds Their Missing Son Lost at Sea as Part of Viral Rescue Mission
How to Un-Stub Your Toe on the Nail of Life | Eric Bailey Motivational Speech | Goalcast
Waitress Soothes “Fussy and Teething” Baby So Mother Can Finish Her Meal
Podcast: What to know about “novelty hunting.”