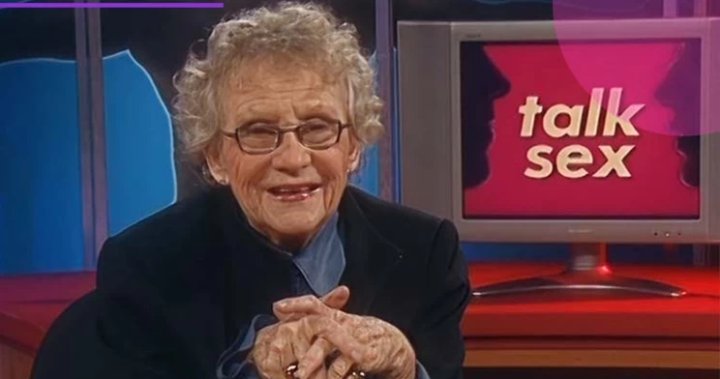 Chances are if you grew up between the late 1980s and early 2000s in Canada, you’re familiar with Sue Johanson and her infamous radio and TV program, Sunday Night Sex Show.

A world-renowned sex educator, Johanson taught so many Canadians how to have safe sex and how to enjoy it. And now she’s the subject of a feature-length documentary, titled Sex with Sue, which takes a peek into how her decades-long career helped shape the way we talk about sex and sexuality today.

For years, Canadians — and later, Americans — would tune their television channels and radio dials to the Sunday Night Sex Show, where Johanson would field calls from people all over the continent.

Adding to her appeal and propelling her to stardom was Johanson’s straightforward, no-frills approach to awkward sex talk paired with her grandmotherly looks and razor-sharp sense of humour. (She “DGAF” before the acronym even became a thing.)

What started out as a small and sometimes controversial radio program eventually skyrocketed Johanson to international fame. She made appearances on Arsenio Hall, David Letterman and Conan O’Brien’s late-night talk shows. She was a recurring guest on the Degrassi franchise. And she travelled across the country, appearing as a guest speaker at countless college and university events.

“I think her first big appearance in the States was with Arsenio Hall. And I remember gathering around the TV to watch that,” Johanson’s daughter, Jane, told Global News.

“And I’ll never forget that fluttering — I was so nervous for her that I realized I can’t watch her being interviewed. It’s not that I didn’t love her or wasn’t proud of her or felt that she was doing such wonderful things. I was nervous for her.”

The documentary, which airs Oct. 10, was a collaboration between Jane and Canadian director Lisa Rideout, which came together after Jane began capturing conversations with her mother on video in 2016 as a way to preserve some of her memories.

Meanwhile, Rideout had been thinking about Johanson and the impact she made on her own life.

“I grew up with the Sunday Night Sex Show and Sue being my main source of education,” she explained, adding that she eventually ended up emailing Sue’s outdated website, but didn’t think anyone would write back. “But it just so happened that Jane was making a film and she needed someone. So we like to think the universe brought us together to make the film.”

Johanson, now 92, is long-retired and enjoying a quiet and simple life. Her decision to put her show to bed came in 2008 when she realized two things: that her energy was beginning to dwindle, and also that the rise of the internet, including the world of online dating and pornography, was beginning to outpace her knowledge and understanding of many sex topics.

“I think she’s very happy to have stepped out of the limelight so that she can finally rest after the whirlwind marathon that she was on,” Jane said.

That doesn’t mean, however, that she’s not keeping abreast of the latest developments in the world of sex and reproductive rights.

Jane says her mother was dismayed and heartbroken when the U.S. Supreme Court overturned Roe V. Wade in June.

“She cried when she heard that… It just made her so sad, but I think almost relieved because she thought, ‘That’s a battle I can’t fight now. I’m too old.’”

And although her mother has yet to watch the documentary, Jane thinks she’ll be thrilled to see some of the sex educators featured in the film who are carrying the torch and providing clear and concise sex information to the next generations of Canadians.

Rideout said that while making the documentary, she was surprised to learn just how much people still need sex educators, despite the overwhelming amount of sex content online.

“I thought that today everyone can just Google whatever they want to, they don’t necessarily need these voices. But I learned that people still need people to answer their questions and really assure them that they’re OK in their sexual desires.”

That exact sentiment has always been a large part of Johanson’s charm. There was no question too weird or no issue too small, and Johanson approached each query with a level head and a sense of humour.

Many of the documentary’s laugh-out-loud moments come from reflections by the crew who worked alongside Johanson on Sunday Night Sex Show. They recount how Johanson would offer sex toys to them, urging them to try them out and report back their findings.

“She just wanted to talk about sex and make people laugh,” said Jane. “She might have been famous, but she didn’t care. She enjoyed meeting new people. That was it. It’s pretty simple, really.”

‘Gen Z yellow’: Next ‘it’ colour or marketing ploy?
The two kinds of productivity advice
The Walt Disney Company to mark 100th anniversary with new experiences
Four Priorities for Total Rewards Leaders in 2023 (i4cp login required)
This Is What Self-Care Really Means, Because It’s Not All Salt Baths And Chocolate Cake