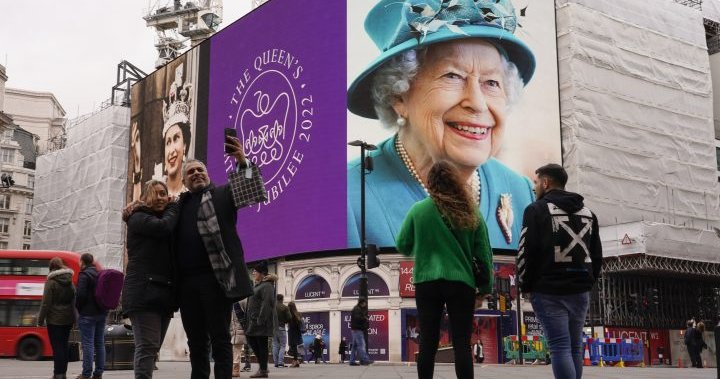 The Queen has adapted to the expansion of liberal democracies while respecting ancient royal customs to create a magic dust that has left an enduring influence on Canada as she marks her Platinum Jubilee, experts say.

Prof. Andrew Heard of Simon Fraser University’s political science department said the Queen has been influential by showing Canadians she is their monarch.

“She’s embraced her role as the Queen of Canada in a cultural and political way,” he said. “She’s been a very important consolidation of Canada’s sense of being its own country, even though it’s emerged from the legacy of British colonialism.”

The Queen marks her 70th year on the throne this month, but her relationship with Canada began when she was a princess. She has visited this country 31 times, including refuelling stops, since her coronation in 1952.

Heard said he believes the Queen has a genuine affection for Canada.

“She has visibly enjoyed her visits over here,” he said. “That’s helped Canadians feel that they are unique, special, important and people worth knowing.”

5:56
Queen Elizabeth reflects on the loss of Prince Philip during annual Christmas message

During her reign, she has been with Canadians in celebration and in tragedy, including making a stop during a visit in 1959 to Pointe-du-Chene, N.B., where she met the families of fishermen who died in a storm.

The moments that helped cement the Queen’s legacy among Canadians, Heard said, also include the signing of the proclamation of the Constitution Act in 1982, giving Canada’s Parliament the power to amend the Constitution without the approval of its British counterpart.

She has also participated in celebrations marking the 100th anniversaries of provinces, such as British Columbia, Alberta and Saskatchewan. She helped the country mark the 125th anniversary of Confederation, and opened the 1976 Summer Olympics in Montreal.

On her arrival during her last visit in 2010, the Queen told a crowd in Halifax: “It is very good to be home.”

Mel Cappe, a distinguished fellow at the University of Toronto’s Munk School of Global Affairs and Public Policy, said while the Queen has been present at iconic moments in Canada’s history, it is her interactions with people during her visits that forged bonds with the country.

“I saw her in-person four times in Canada,” he said. “I can remember the moments.”

He also highlighted a project the Queen has been passionate about for helping shape her legacy: the Commonwealth.

“The British Empire is declining and she pulls out of the hat something to keep the connections among the nations of the Commonwealth.”

Canada has emerged as a key player in the Commonwealth, partly because of its status as a member of the G7 and the fact it is the second largest donor to the group, he said.

Majority of Canadians want to ditch the British monarchy. How feasible is it?

Sarika Bose, a University of British Columbia lecturer in Victorian literature and an expert on the Royal Family, said while there are 43 monarchies in the world, the Queen is seen as the last remaining global monarch.

Bose described the Queen as a “living legacy,” a reassuring constant through ups and downs. Her instinct and focus on service began when she trained as a car mechanic during the Second World War, she said.

Heard said support for the monarchy in Canada is a product of a personal respect that many Canadians have for the Queen.

Whether that continues when her son becomes King, is a “hard thing” to gauge, he added.

“There is less warmth, less respect for Prince Charles and the prospect of him being our King doesn’t excite Canadians nearly the same way.”

Vincent Geloso, an assistant professor of economics at George Mason University in Virginia and a Quebec native, said Charles’s popularity ratings are still higher than the most popular premier or politician in Canada. Public opinion surveys have placed Charles’s approval rating in the low 80-per-cent range, a level no politician is at, he added.

Prof. Mauro Guillen, dean of the Cambridge Judge Business School at the University of Cambridge, said there will be questions raised about whether the monarchy should continue in Canada when Charles is King.

“Prince Charles is going to have a very tough job ahead to persuade people that he can be as good as his mother in that role.”

But Guillen, who has studied the economies of countries with monarchies, said there is an economic case to be made for the Royal Family because a greater proportion of monarchies are among the world’s richest countries.

Based on a recent study he did, Guillen said of the 157 republics in the world, 27 are among the 50 richest countries. The other 23 come from the world’s 43 monarchies.

“That’s because of the stability,” he said. “The economy, over the long run, develops better because of stability.”

Bose said Charles’s personal life has overshadowed his work but his enterprises along with those of his children have highlighted important environmental and mental health issues.

The Queen’s training focused on self-control and being careful in public, she said. By the time Charles came into public life in the middle of the 20th century, people’s expectations changed and the future King has been less remote than his mother, she said.

“And in professional terms, that may have harmed him because, of course, that personal life became the source of scandal as a real distraction from the good work that he was doing and has continued to do,” Bose said.

“Part of the big shoes to fill would be that _ not the work that he’s been doing because he has been doing so much _ it will be to change people’s perceptions that he’s doing good.”