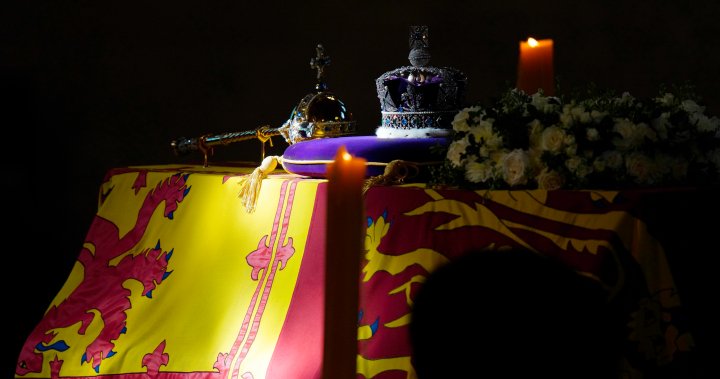 Britain is getting ready to bury its longest reigning monarch, Queen Elizabeth II, after what is anticipated to be one of the largest state funerals in the country’s history.

Hundreds of thousands of people are expected to gather in London, with leaders from across the globe flying in to pay their respects.

A peek inside the history of Westminster Hall, where Queen Elizabeth lies in state

London’s police force said her state funeral Monday will be the biggest security operation it has ever undertaken.

Here is what is expected on the day and where to watch it:

When and where is the funeral taking place?

The state funeral service will begin at 6 a.m. ET (11 am UK time) on Monday and run for an hour.

The venue is Westminster Abbey, the same church in London where the queen was crowned 70 years ago.

The service will be conducted by the Dean of Westminster, according to details released by the Buckingham Palace Thursday.

After the prayers, the sermon and commendation will be given by Archbishop of Canterbury.

A two-minute silence will be observed in the Abbey and across the country, followed by the national anthem to bring the funeral service to a close at 7 a.m. ET.

London’s Heathrow Airport announced it will halt all flights for 15 minutes before the two-minute national silence.

3:14
Royal harpist for Queen Elizabeth and King Charles on music fit for the monarchy

According to Edward William Fitzalan-Howard, the official in charge of arrangements, the funeral and memorial events are intended to “unite people across the globe and resonate with people of all faiths, whilst fulfilling her majesty and family’s wishes to pay a fitting tribute to an extraordinary reign.”

Who will be in attendance?

Dozens of world leaders, politicians, royals and celebrities will be in attendance at the 2,000-guest funeral.

New Zealand Prime Minister Jacinda Ardern and Australian Prime Minister Anthony Albanese will also be there, along with other leaders from Commonwealth countries.

From Canada, Prime Minister Justin Trudeau and his wife Sophie Grégoire Trudeau have travelled to London and are accompanied by Gov. Gen. Mary Simon and her husband Whit Fraser, along with former governors general Michaëlle Jean and David Johnston.

Also among the funeral guests will be nearly 200 people honoured by the late queen for their work corresponding to the COVID-19 pandemic and in sectors including charities, healthcare and education.

After the funeral service draws to a close, the queen’s coffin will be returned to the State Gun Carriage by the bearer party for a procession to Wellington Arch at Hyde Park Corner.

The procession is scheduled to begin at 7:15 a.m. ET and will arrive at Wellington Arch at 8 a.m. ET.

King Charles III and other members of the Royal Family will follow the queen’s coffin as Big Ben tolls throughout the duration of the procession.

The procession will be formed in seven groups, each supported by a service band.

Minute Guns will be fired in Hyde Park by The King’s Troop, Royal Horse Artillery.

The queen’s coffin will be transferred to the State Hearse at Wellington Arch by the bearer party to travel to Windsor.

As the hearse departs, the parade will give a royal salute and the national anthem will be played.

The royal family will travel by car to Windsor.

When and where is the burial?

The route will be lined by the armed forces and minute guns will be fired. The Sebastopol Bell and the Curfew Tower Bell will also be tolled.

At 10:53 a.m. ET, the procession will halt at the bottom of the West Steps of St. George’s Chapel.

After the queen’s coffin is brought into the chapel, the committal service will begin at 11 a.m., conducted by the Dean of Windsor. A total of 800 people are set to be in attendance, including members of the queen’s household and Windsor estate staff.

The choir of St. George’s Chapel will sing during the service.

Before the final hymn, the Imperial State Crown, the Orb and the Sceptre will be removed from the coffin and placed on the Altar.

At the end of the final hymn, the King will place The Queen’s Company Camp Colour of the Grenadier Guards on the coffin.

The Lord Chamberlain will simultaneously “break” his Wand of Office and place it on the coffin.

While the queen’s coffin is lowered into the Royal Vault, the Dean of Windsor will say a Psalm. The commendation occurs before Garter King of Arms pronounces the queen’s styles and titles.

Why are people drawn to the Royal Family — and will it survive the queen’s death?

The Sovereign’s Piper will play a lament and the Archbishop of Canterbury, Justin Welby, will pronounce the blessing.

The service will be concluded with the singing of the national anthem.

A private burial service, attended by the family, will take place at 2:30 p.m. ET in The King George VI Memorial Chapel, where the queen will be buried by the side of her husband, Prince Philip.

The private service will be conducted by the Dean of Windsor.

In Canada, at 12:10 p.m. ET a memorial parade from Cartier Drill Hall will travel through downtown Ottawa. It will pass the National Aboriginal Veterans Monument and the National War Memorial, while following a ceremonial route along Wellington St.

Across from the Canadian War Museum, a 96-gun salute — one salvo for each year of the Queen’s life — will be conducted from the LeBreton Flats during the memorial parade.

Following all elements of the state funeral in London, a national commemorative ceremony to honour the queen will be held at Christ Church Cathedral in Ottawa at 1 p.m.

Prayers will be read by the Canadian secretary to the King Donald Booth and brigadier-general Guy Bélisle, Canadian Armed Forces chaplain general.

Addresses will be given by Brian Mulroney, the 18th prime minister of Canada, and the 26th governor general of Canada, Adrienne Clarkson.

4:55
Should the queen’s funeral be a national holiday in Canada?

Should the queen’s funeral be a national holiday in Canada?

The national anthem will be performed by singer and actor Kim Richardson.

The ceremony will be concluded with a flypast over Parliament Hill and Christ Church Cathedral by Royal Canadian Air Force CF-18s.

Global News has a team in London, covering the queen’s funeral and the subsequent ceremony in Ottawa.

— With files from Reuters and The Associated Press

This Is What Self-Care Really Means, Because It’s Not All Salt Baths And Chocolate Cake
This Year, Let Go Of The People Who Aren’t Ready To Love You
Why Change is Good | Motivational Video | Goalcast Motivational Speech
Four Priorities for Total Rewards Leaders in 2023 (i4cp login required)
I Have 2 Questions For You (Motivational Video) Fearless Motivation