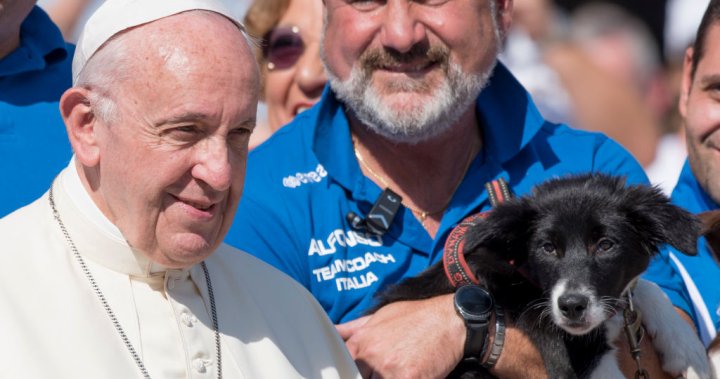 Pope Francis has called couples who decide to have pets over children “selfish,” while instructing people to have more children in the face of declining populations.

Speaking to a general audience at the Vatican on Wednesday, he said, “Today … we see a form of selfishness. We see that some people do not want to have a child. Sometimes they have one, and that’s it, but they have dogs and cats that take the place of children. This may make people laugh but it is a reality.”

The Pope argued that a couple’s decision to remain childless leads to a loss of “humanity” and does not serve civilization.

“And this denial of fatherhood or motherhood diminishes us, it takes away our humanity. And in this way civilization becomes aged and without humanity, because it loses the richness of fatherhood and motherhood. And our homeland suffers, as it does not have children,” he continued.

Saint Joseph, you who loved Jesus with fatherly love, be close to the many children who have no family and who long for a daddy and mommy. Support the couples who are unable to have children, help them to discover, through this suffering, a greater plan. #GeneralAudience

His comments struck a sour note, with many people taking to social media to call out the childless leader of the Catholic Church.

How many children does the Pope have, again? Sounds a little hypocritical if you ask me. https://t.co/9L0ff9HcuJ

How many babies has the Pope? https://t.co/RDKVKYWSoF

the Pope is clearly clueless about what it takes to have kids. What would he know? why should people be thrust into poverty to have children? That’s what frequently happens. Consciously deciding not to have kids is noble. https://t.co/CpLYmIXxFo

Others shared that the Pope should not have a say or opinion in the personal choices people make for their bodies.

If I were the Pope I wouldn’t tell women to do anything. Not my place 💅 https://t.co/awBjkYhLdX

The Pope does not have the right to tell women what to do with their bodies.

If couples want to adopt pets instead of having/adopting children, they have the right to do so. https://t.co/xpYFvPHZ9Z

The Pope and so many others have such a fetishization of the uteruses of women. Stay out of ’em. Not everyone wants kids. Society barely cares about the kids who are already born and need love, shelter, and happy homes. https://t.co/2mGInHQb4O

In his address, the Pope also suggested that couples who cannot biologically have children should consider adoption, and urged potential parents “not to be afraid” of having kids.

“Having a child is always a risk, but there is more risk in not having a child, in denying paternity,” he said, referencing a “demographic winter” – possibly referring to countries with declining birth rates.

Canada’s birth rate has been steadily declining since 2008 – a trend seen across much of the western world.

Mary-Ann Murphy, an associate professor at the University of British Columbia who specializes in aging and demographics, told Global News last year that the COVID-19 pandemic in Canada has brought with it “the opposite of a baby boom.”

She said more couples are concerned about finances, job security and keeping a roof over their heads than growing their families.

She also said that more women are spending what would be considered prime child-rearing years on advancing their jobs and livelihoods, and are not choosing to have children until their 30s.

“And when you wait that late, you’re not going to end up having very many kids,” she said.

This is not the first time Pope Francis has lectured those who choose pets over children.

According to the BBC, in 2014 he called the decision to have a pet, but not kids, “another form of cultural degradation.”

— with files from Ashleigh Stewart, Sean Boynton and David Lao

Couple Has Been Divorced for 28 Years – But, Woman Notices Her Dad at Her Mom’s House for This Surprising Reason
Meeting Your Match: 5 Foolproof Ways to Create the Best Tinder Bio
Go west, young man: Alberta sees largest wave of interprovincial migration since 2014
Mom Alone at Home With 4-Year-Old Son Falls Unconscious – He Steps in With a Skill He Learned the Day Before
5 Ways to Start Healing from the Grief of Betrayal and Domestic Abuse