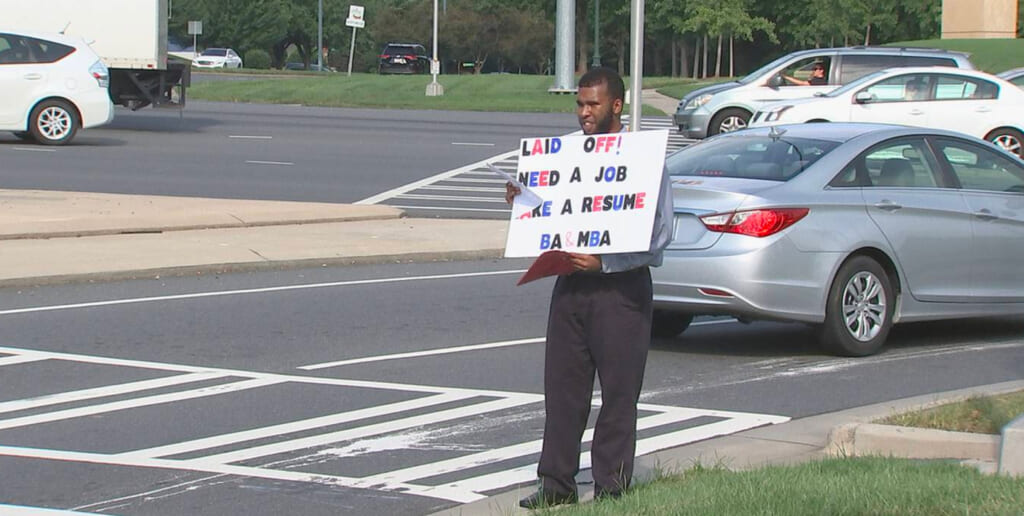 When a Charlotte father gets laid off, he takes a unique approach to finding a new job.

“Unfortunately, this is my second time being laid off, so I’ve been in this situation before,” Bridges says.

He spent hours each day applying to jobs and interviewing for many of them without success. Bridges said his wife works, but that the costs of living in Charlotte have been on the rise. One income isn’t enough anymore, and they had been struggling, even having to pick and choose which bills to pay. Bridges said that they were at risk of losing their home to foreclosure.

RELATED: Man Decides to Spread Hope on His Morning Jog – What He Does Ends Up Saving Lives

Bridges was feeling his back was against the ropes. He had to get creative to make sure he could give a better life to his children. So, when the traditional job search route didn’t work, he took to the street.

The North Carolina dad started in uptown Charlotte, but got results on his second day when he stood at a busy intersection in Ballantyne with a sign and a pile of resumes.

He passed out 50 resumes, and his story began gaining traction online. Now he is getting support from all across the world.

Now This Unemployed Charlotte Father Can Work Anywhere He Wants

People from all over North America started contacting Bridges with words of encouragement. Some were folks who had lost their jobs, and cited Michael as an inspiration. One person in Sweden even offered him a job.

Bridges says he is grateful and wants to share some advice with job seekers.

Just as long as you remain humble and hungry, your determination will see it all. I had a lot of determination so that’s why I stood out there and I put my pride to the side.

Bridges says he’s consulting with his wife before he chooses which job offer to accept, an incredible turn of fate for someone who was just recently jobless and struggling. This story illustrates beautifull that creativity and courage can overpower all odds. Never say never.

Domino’s Employee Delivers a $12 Order – But the Unusual Tip He Received in Return Takes Him by Surprise
How to Un-Stub Your Toe on the Nail of Life | Eric Bailey Motivational Speech | Goalcast
It Takes One Person To Make You Feel Like You Matter | Kyle Scheele Inspirational Speech | Goalcast
Why I Didn’t Trust Myself to Make Decisions (and What If It’s All Okay?)
Beyond Dry January: 5 Benefits of Extending Your Break from Alcohol