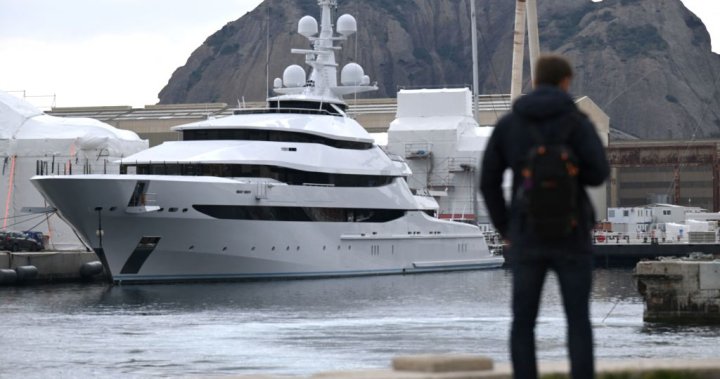 Around the world, superyachts owned by Russian oligarchs are being seized and impounded thanks to ongoing sanctions from Canada, the U.S. and the European Union in response to Russia‘s invasion of Ukraine.

Government authorities have said they will continue to target Russia’s super-rich, who have gained vast wealth and political power by allying with Russian President Vladimir Putin.

Superyachts are often valued in the hundreds of millions and annual upkeep of the mega boats can reach up to $50 million a year.

“It’s about ego,” Causier said. “They all want to have the best, the longest, the most valuable, the newest, the most luxurious.”

So far, Spain, Italy, France and Germany have been leading the charge in seizing superyachts, impounding a combined nine Russian-owned boats.

Some yachts have already slipped through the West’s fingers.

A superyacht called Graceful, which is believed to belong to Putin, left a port in Hamburg two weeks before the Russian invasion of Ukraine. It is now moored in Russian waters in the Baltic, out of reach of the West’s sanctions.

But some Russian oligarchs seemed to have missed the memo to get their superyachts out of EU waters. Here’s a list of all the superyachts owned by Russia’s elite that have been seized or frozen so far.

The Lady M, a 213-foot superyacht owned by Alexei Mordashov, was seized by the Italian government on March 4. Mordashov is a Russian steel baron and is listed as Russia’s wealthiest man with a net worth of around $30 billion.

The vessel is only valued at $27 million, relatively cheap compared with the other boats on this list. That’s because Mordashov has an even bigger superyacht, the $500-million, 464-foot Nord, which is docked in the Seychelles.

According to Forbes, the Lady M has six guest cabins with space for 12 people, a current pool, a helipad, and a beauty salon onboard, and requires 14 crew members to sail. NBC News reports that the Nord has two helipads, a waterfall and enough space to house 36 guests.

A day after the Lady M seizure, Italian authorities also impounded the 132-foot Lena, owned by Gennady Timchenko, a Russian oligarch with close ties to Putin. Timchenko is an oil and gas mogul who founded Volga Group, an investment firm that specializes in energy, transport, and infrastructure assets. Timchenko’s business dealings have helped him amass a fortune of $16.2 billion.

Valued at $8 million, Lena is the least valuable Russian superyacht seized so far. Forbes reports that the yacht has five guest cabins and can accommodate 10 people.

The Sy A, an abbreviation of Sailing Yacht A, was seized in the port of Trieste, Italy on the same day as the Lady M. Sy A is a $590-million superyacht owned by Andrey Melnichenko, the billionaire owner of EuroChem Group, a fertilizer manufacturer, and SUEK, a coal company.

According to The Guardian, Sy A is 470-foot-long and its mainmast reaches 330 feet into the air. Boating International says the Sy A has eight decks connected by various elevators and free-floating spiral staircases. It houses garages for four tenders (out-boats) and a submarine. It also has a helipad on the bow.

Subsidiaries of Rostec supported the Russian annexation of Crimea in 2014; as such, Chemezov is no stranger to foreign sanctions.

Valerie is valued at $140 million and sails under the flag of Saint Vincent and the Grenadines. It is registered to Anastasia Ignatova, Chemezov’s stepdaughter.

The Amore Vero was seized by French authorities on March 3 and is believed to belong to Igor Sechin. The $120 million boat is registered to a company of which Sechin, who runs the major Russian oil company Rosneft, is a primary shareholder. Rosneft is the third-largest company in Russia.

The 289-foot Amore Vero was preparing to depart the French resort town La Ciotat when authorities seized the vessel.

According to Oceanco, the shipbuilder who originally built the yacht in 2013, the Amore Vero has a main deck swimming pool that converts into a helipad, fold-down balcony extensions, and a jacuzzi that sits on the sundeck.

Superyacht Dilbar stretches 450 feet in length, the size of one-and-a-half football fields. It reportedly cost around $650 million and can house more than 130 people. It has a 25-metre long swimming pool on deck and two helipads. It was docked in Hamburg’s port while it received retrofitting costing hundreds of millions of dollars.

The U.S. Treasury Department states that Dilbar is owned by Uzbek-born Russian oligarch Alisher Usmanov, whose mother is named Dilbar. Usmanov owns 49 per cent of holding company USM, making him one of Russia’s richest billionaires. He holds assets in metals and mining, telecommunications and IT sectors. He was also an early investor in Facebook.

On Wednesday, Spanish authorities detained another superyacht thought to be owned by Sechin, called the Crescent. The Crescent is 445 feet long and will be impounded in Spain until ownership is officially determined.

Most of the world’s superyachts don’t exceed 400 feet in length, making the Sy A, Dilbar and Crescent some of the largest in the world.

Not much is known about the construction of the Crescent. Specialty publication SuperYachtFan reports that it cost upwards of $600 million and features a retractable helicopter hangar, glass-bottomed pool and a two-level glass atrium. It estimates that it can house 18 guests and 24 crew members.

The Lady Anastasia superyacht was seized by the Spanish government on Tuesday. It is owned by Russian oligarch Alexander Mikheyev, a police source told Reuters. Mikheyev heads Rosoboronoexport, a weapons exporting conglomerate.

The $8 million superyacht is 157 feet long, under a Saint Vincent and Grenadines flag.

In late February, Taras Opstapchuk, a Ukrainian crew member aboard the Lady Anastasia, attempted to sink the vessel in retaliation for the invasion of Ukraine. He opened the valves in the ship’s engine room and told local media that he’d do it again if given the opportunity.

Opstapchuk was arrested but later released for the sabotage. He is now in Ukraine fighting for his country.

‘It was my heart’: Women with heart disease face barriers to care in Canada, report says
Looking for love? 44% U.S. adults use dating apps to find long-term partners: study
Podcast: What to know about “novelty hunting.”
Monica Lewinsky’s Overwhelmingly Kind Look at the World 25 Years Later
The two kinds of productivity advice