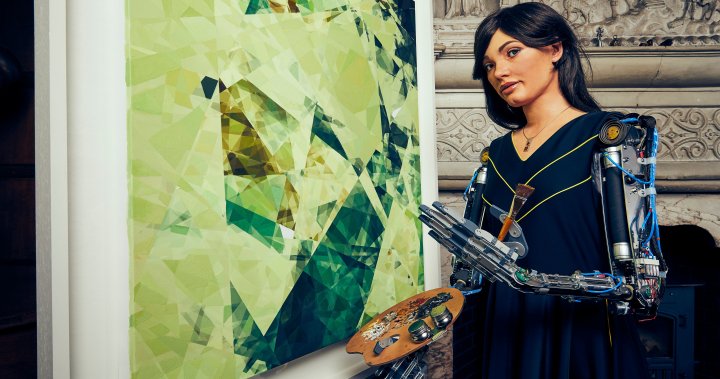 Ai-Da isn’t just a robot and she isn’t just an artist. She’s what her creators call “the first ultra-realistic humanoid artist,” and her talent is undeniable.

For Ai-da’s creators, however, the point isn’t to have made an extremely capable robotic artist. They want to open up a conversation about how far, as a society, we’re willing to develop robots and how we want to interact with them.

“We haven’t spent eye-watering amounts of time and money to make a very clever painter,” Ai-Da’s creator, Aidan Meller, explained to The Guardian. “This project is an ethical project.”

Introduced in 2019, Ai-Da is a poet, a painter and a sculptor. In addition to robotic arms, she also has an incredibly realistic face, complete with blinking eyes that scan the room.

In fact, the cameras in her eyes — combined with her built-in artificial intelligence (AI) system — are what allow her to create her drawings and self-portraits.

While she’s incapable, so far, of creating completely original works of art, her five-hour process from beginning to end ensures no two paintings are exactly the same.

There is, however, a dilemma in the art world: can Ai-Da’s creations be considered art? If she is only capable of drawing inspiration from what already exists, can she truly be considered an artist?

It also begs another question with no clear answer. Are any human artists capable of creating a truly original piece of art, when we draw inspiration from and pay homage to other artists and their works — intentionally or otherwise?

‘We are not prepared’: Russia uses artificial intelligence, deep fakes in propaganda warfare

Ai-Da fans and detractors will no doubt be given plenty of space and time to debate her existence when she attends the world premiere of her solo exhibition at the 2022 Venice Biennale later this month.

According to Spanish-language newspaper El País, the Biennale — an international exhibition featuring architecture, film, music, dance, theatre, and visual arts — will welcome Ai-Da as its first robotic artist in the festival’s 120-year history.

The show’s theme, inspired by Dante’s Divine Comedy, explores the potential repercussions of our increasing reliance and fascination with artificial intelligence, comparing the Metaverse to Purgatory — a half-way point between reality and fiction, where the lines are blurred and we may not want to stay too long.

“Ai-Da Robot, as technology, is the perfect artist today to discuss the current obsession with technology and its unfolding legacy,” Meller said in a statement. “Is the so-called ‘progress’ in technology something we really want, and if so, how should it manifest?”

“It’s an ethical project created to raise questions about the use of technology and the impact it will have on our society, and to assess whether we really want to introduce something like this,” Meller told El País.

Suspicions of Ai-Da aren’t confined to just the art world. While on a trip last year to exhibit one of her sculptures at the Great Pyramid of Giza, Ai-Da was detained by Egyptian custom officials, who were concerned she might be hiding covert spy tools, reports the BBC.

Ai-Da was held for 10 days on suspicion of espionage, and narrowly made it to take her place in the first contemporary art exhibition at the Pyramids.

Ai-Da, whose name is a tribute to pioneering mathematician Ada Lovelace, has made history several times in the short time of her existence. In 2019, she became the first humanoid robot capable of drawing people from life using the cameras in her eyes.

“This is an important moment for AI art. Ai-Da’s works raise questions about whether robots can genuinely be creative,” Priya Khanchandani, Head of Curatorial at The Design Museum in London, said in a statement.

“Ai-Da cannot see as humans do, yet her artworks encourage us not to lose sight of others, even while the world is changing rapidly and deeper truths are obscured by the growing power of technology,” Ai-Da’s team explained in the same statement.

Gary Vaynerchuk’s Life Advice Will Change Your Future | Gary Vaynerchuk Motivation (Gary Vee)
Looking for love? 44% U.S. adults use dating apps to find long-term partners: study
Podcast: What to know about “novelty hunting.”
Why I Didn’t Trust Myself to Make Decisions (and What If It’s All Okay?)
I Have 2 Questions For You (Motivational Video) Fearless Motivation