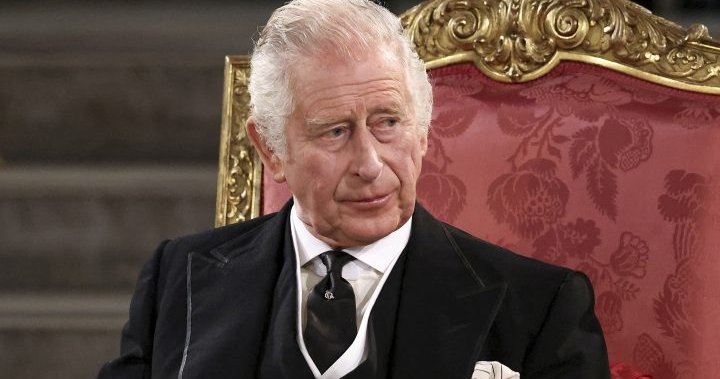 Britain’s new monarch, King Charles III, just like his late mother Queen Elizabeth II, is keeping his given name despite the historical baggage associated with it.

Charles Philip Arthur George, who acceded to the throne Thursday after the death of his mother, could have chosen another name to be used during his reign.

But his decision to retain his birth name comes as no surprise, royal observers and historians say.

“He’s quite comfortable in his own skin, his own name and his own identity,” said Keith Roy, a spokesperson for the Monarchist League of Canada.

“His own reputation is strong enough that he can maintain his name,” he told Global News.

As the longest-serving heir to the British throne, Charles has been in the public eye for as long as he’s been alive, so a name change at this point in his life would’ve been “quite jarring” according to Roy.

The last time a British monarch changed their name was in 1936, when Queen Elizabeth II’s father, who was born Albert Frederick Arthur George and called Bertie by friends and family, chose King George VI as his title to honour the memory of his father, King George V.

Meanwhile, King Edward VII, who was on the throne from 1901-1910, was born Albert Edward and he too was called “Bertie” by his family and close friends.

His mother, Queen Victoria was originally named Alexandrina Victoria after her godfather.

Some royal watchers speculated that that new monarch would pick a different name as king because of the historical baggage associated with the two previous British monarchs called Charles.

Queen Elizabeth II’s legacy: Instead of mourning, many are questioning

King Charles I, who reigned from 1652 to 1649, is the only British sovereign whose rule led to revolution and the temporary abolition of the monarchy.

Following a power struggle between the Crown and Parliament, he was convicted of high treason and beheaded in London.

4:39
Camilla: From outcast to Queen Consort

Camilla: From outcast to Queen Consort

His son, King Charles II, had considerably less power than his father enjoyed. He was stripped of the ability to make law without the consent of Parliament.

Charles II’s 25-year reign also drew controversy because of his many mistresses and illegitimate children. He was nicknamed the “merry monarch” in reference to his hedonism and romances.

“I think that the Crown has been aware of these issues and I am sure that is something they would have had conversations about,” said Justin Vovk, a PhD candidate in early modern history at McMaster University.

But ultimately it’s a personal choice made at the full discretion of the monarch and “popular familiarity” of the name has a role to play, said Stephen Brooke, professor and chair at York University’s history department.

Past and future of regnal names

Historically, new monarchs picked a different name for their reign as a way to shed a previous opinion about them and start fresh, said Roy.

It was also a way to make a mark and build a reputation, especially if they came to the throne through a series of unfortunate events or an untimely death, he explained.

“If you have a name that doesn’t align with what you want to accomplish, you would change that name to line it up with some of your predecessors and adopt a new persona and a new direction in your position as the Crown.”

Roy said what has changed with the current Royal Family is that it increasingly lives under the media spotlight, so there is a greater connection with the public than previous generations.

With the monarchy and the Royal Family becoming more of a “celebrity brand,” Brooke said the tradition of changing names will likely fade going forward.

“I think that we’re going to be seeing a pattern of royal names staying the same,” said Vovk. “I think there’s every expectation that William will keep that name. He will be William V.”

Roy agreed, saying: “I would imagine going forward that kings and queens will retain their birth name all the way to the throne for the foreseeable future.”

— with files from the Associated Press

It Takes One Person To Make You Feel Like You Matter | Kyle Scheele Inspirational Speech | Goalcast
Sweet Revenge: Woman Wins Lottery Jackpot After Husband Leaves Her for Best Friend
Haute couture goes ‘surreal’ and upside-down at Paris fashion show
I Have 2 Questions For You (Motivational Video) Fearless Motivation
This Is How You Become the Best Version of Yourself in One Step | James Lawrence | Goalcast