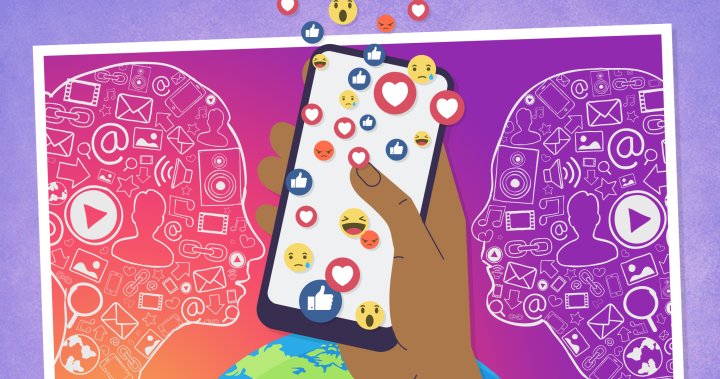 3:55
Coping with cancer: Young people using humour and levity to deal with their diagnosis

Coping with cancer: Young people using humour and levity to deal with their diagnosis

When Chelsey Gomez was diagnosed with Hodgkin lymphoma at 28, she didn’t feel like a cancer warrior.

As a mom to a toddler, she was more worried about what the future would hold.

Having cancer didn’t spark a major epiphany and there was no renewed zest for life. Rather, Gomez found herself grappling with unexpected, complex emotions — feelings that she poured into digital art and shared to Instagram.

“I needed an outlet for some of these feelings that I was having after everything I had been through,” Gomez said. “I decided to start drawing how I really felt about cancer versus the way that everyone told me I should feel.”

Relying on dark, sardonic humour, Gomez crafted art and memes about cancer treatment, grief and death — think a celebratory cake with the words “NOT DEAD YET” written in icing.

When her Stage 2 cancer was discovered in 2018, Gomez, who lives in central Florida, completed 12 cycles of chemotherapy over six months. Afterward, her oncologist said there was no evidence of disease (NED) and she quickly returned to her regular life, even going back to work a mere six weeks later. (“P.S. — Don’t do that,” Gomez joked.)

“I wasn’t a warrior with a sword battling a dragon. I was just a girl hooked up to an IV pole trying not to die,” she told Global News.

“When you talk about it with other people, you don’t feel so alone or like you’re out of your mind,” she said, adding she felt very validated when she learned there were many other young cancer patients out there who also don’t identify with the “warrior” mindset.

A self-proclaimed “funny friend,” Gomez said she’d rather laugh about her experiences than dwell in the sadness. Still, just because she’s laughing doesn’t mean cancer isn’t a serious subject.

“Never would I say we’re making light of cancer,” she said. “We all are very aware of the monster that’s behind us — that is cancer — that could come back at any time.”

For those not in the cancer community, it can be a bit shocking how many people make extremely dark jokes about their bad luck.

Pages like The Cancer Patient (@thecancerpatient) on Instagram — with more than 90,000 followers — face an often deadly disease with gallows humour and pointed memes.

‘Frustrating’ and ‘devastating’ — The domino effect of family doctor, LTC shortages on ERs

The admin of The Cancer Patient profile, who asked to remain anonymous, uses the darkest of dark humour to poke fun at everything from treatment to doctor-patient relationships and mental health.

Though they are quite soft-spoken in actual conversation, the admin has witty meme creation down to a science. Within mere minutes of a major pop culture event, they can weave a scintillating joke about cancer. Following the now-infamous Will Smith-Chris Rock Oscars slap, for example, the admin posted several memes within moments.

The admin was diagnosed with cancer in 2014 when they were 24. Having immigrated to the U.S. from the Philippines the year prior, they didn’t have the in-person support from friends and family that many cancer patients do.

Through six cycles of chemo, remission and a cancer recurrence, followed by 20 rounds of radiation and a stem cell transplant, they leaned into online cancer circles.

“Online support was huge for me during treatment,” they said. “When I was going through treatment — having no physical support system around me — I was withdrawn, and I wasn’t myself.”

They would often engage in Facebook groups designed for the cancer community, sometimes creating and posting memes to have a laugh at a difficult aspect of a diagnosis. The response was incredibly enthusiastic, prompting them to go even further.

Thus, @thecancerpatient was born, and cancer-havers of every kind flocked to the page to thank them not only for the chuckles, but also for making their experience relatable.

What’s important to @thecancerpatient is normalizing complicated emotion and vulnerability. Through dark humour, the admin can address the most challenging aspects of a young adult cancer diagnosis without feeling like a bummer.

One example, which has become a long-running joke within @thecancerpatient’s community, is celebrating what’s been coined the “post-cancer ho phase.” Using the hashtag #pchp, folks with cancer diagnoses can celebrate their return to dating and sex following difficult treatments or surgeries that, at one time, left them feeling sexually inadequate or with a low libido.

When you can’t have a PCHP so your coping mechanisms lean towards to Post Cancer Splurge Phase pic.twitter.com/aUrLd6X2nf

“You just can’t help but notice that every time I post a funny meme about very real experiences, very painful memories, traumatic memories, traumatic experiences that we’ve been through, there’s always a very organic conversation,” they said, adding that they take a critical look at “toxic positivity” – the notion that people need to remain positive in order to get better.

“Positivity has its place, but at the same time, voicing how you really feel isn’t necessarily negative,” they said. “It’s healthy, human and natural.”

Cancer through their lens isn’t about charity fundraisers and inspirational slogans, they said; it’s also about the “normalizing the sh–ty side of cancer.”

Jokes aside, @thecancerpatient’s account is also a celebration of community members who die from cancer. The account’s social media stories, which serve as an honest discussion space for the cancer community, are frequently punctuated with memorial slides for those who have recently died. Bookending each memorial slide is a blackout screen, and a picture of the admin’s dog, who serves as a mascot that provides a vital “therapy pupper intermission.”

“Cancer is very unpredictable and the doctors, the surgery, the chemo, the radiation, it may cure the cancer, but it doesn’t heal your soul. Humour, community and connection with other people who have been through it before, that’s what actually heals you.”

Humour as a coping mechanism

Coping is a necessary process in the wake of a major stressor like a cancer diagnosis.

Catherine Sabiston, a University of Toronto professor who’s researched the links between cancer and mental health, said there are three kinds of coping: problem-focused coping, emotion-focused coping and avoidance coping.

The use of humour is a form of emotion-focused coping, she said.

“Emotion-focused coping is dealing with the emotional side of the threat or the stressor,” she said. “Humour is used as tension relief.”

She told Global News there is a “social component of humour” that connects groups of people. Whether it’s the use of humour to break the ice about a difficult subject, or even as a way to level the playing field between physicians and patients in the health-care system, Sabiston said humour is a useful tool in a cancer patient’s arsenal.

“Oftentimes, people diagnosed with a chronic illness feel this loss of identity, and so using humour as a way to reconnect in that way is very helpful,” she said.

But — and this is a huge caveat — it doesn’t mean humour is for everyone. Coping, as expected, is deeply individualistic, Sabiston said.

“What works for one person is not going to work for others,” she said.

“It’s important to use (humour) when it feels right and not to second-guess or to worry about the use of it or the reactions to it,” said Sabiston. “It’s really for your own personal use.”

Jeremie Saunders has always used his humour in difficult conversations. His life-long love of comedy has made him an expert at diffusing awkward tension around subjects like chronic illness, including his own cystic fibrosis diagnosis. Over the years, Saunders has opened a door for individuals with life-changing diagnoses, including cancer, to have open, honest conversations.

Saunders, 34, and his best friends, Brian Stever and Taylor MacGillivary, started Sickboy Podcast to do just that. Using humour as a bridge, the men from Halifax discuss the realities of living with chronic illness in a candid and refreshing way.

Patients with all types of cancer are regularly featured as guests on the podcast.

“For myself, it was really empowering,” said Saunders. “It was the first time I got to speak about my illness with people openly where there wasn’t this air of just a complete bummer.”

Sarah B., a Stage 4 oligometastatic breast cancer survivor from Vancouver, decided to reach out to SickBoy after receiving her diagnosis in 2018 at the age of 27.

“I had been listening to SickBoy podcast for years before my diagnosis. So when I found out I had cancer I jokingly thought ‘maybe now I can go on SickBoy!’” she told Global News.

She applied to be a guest and soon found herself chatting with the hosts of the podcast she’d grown so fond of, pre-cancer.

“Usually it’s only other cancer patients that can laugh about cancer stuff with me, so it was nice to be able to have an open and fun conversation about my experience in a public way.”

Sarah says the humour she’s found through the online cancer community has played a “huge” role in her ability to cope with having a cancer that may never be cured. She’s made friends around the globe – people with whom there’s no awkward tension or uncomfortable moments, just pure understanding.

“Having cancer at a young age is super isolating, so being able to laugh about it with people that understand is so important,” she said.

Saunders, a lifelong fan of standup comedy, has always used humour as a way to bring levity where needed.

“What we’re trying to do with the podcast is we are trying to promote meaningful communication,” he said. “We found that laughter, when speaking about really tough subject matter, is not something to be used as a crutch, but rather it’s a tool that you can use to access this bridge to get to the heart of the real stuff that matters.”

Dark humour, according to Saunders, can promote meaningful conversation about things that are hard to communicate.

The SickBoy team have hosted dozens of cancer patients on their podcast, all of whom, despite their cancer diagnosis, “mine for and seek out the levity that exists within that human experience.”

Saunders encouraged people living with chronic illness or a cancer diagnosis to not shy away from the humour that still exists within dark situations.

“For me, humour is a form of therapy. It is medicine.”

‘Against All Odds: Young Canadians & Cancer’ is a biweekly ongoing Global News series looking at the realities young adults face when they receive a cancer diagnosis.

The Choice We All Have , But Only a Few Apply It | Joe Dispenza
Four Priorities for Total Rewards Leaders in 2023 (i4cp login required)
Sweet Revenge: Woman Wins Lottery Jackpot After Husband Leaves Her for Best Friend
The Walt Disney Company to mark 100th anniversary with new experiences
The two kinds of productivity advice