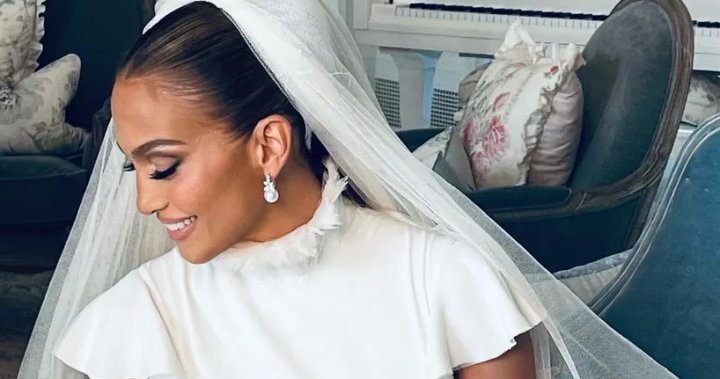 Even on her (second) wedding day, it’s impossible to forget that Jennifer Lopez is a style icon.

On Tuesday, the newly married star shared several photos of the three bridal looks she wore while saying “I do” to husband Ben Affleck during a second ceremony Saturday at their home in Riceboro, Ga.

The couple was legally married in Las Vegas last month at a drive-thru chapel. Saturday’s ceremony saw the pair profess their love for each other during a lavish ceremony in front of friends and family.

Lopez teased one of her bridal looks on Instagram with a close-up photo of her face under a white veil. She sported a signature Lopez smoky eye and a light lip colour, while pearl drop earrings and a feathered neckline could also be seen in the image.

“First peek at my wedding looks at OnTheJLo.com,” Lopez, 53, wrote on Instagram.

The wedding looks in question, as revealed in her newsletter OnTheJlo, were three lavish custom-made Ralph Lauren gowns.

The first wedding dress — the one teased on Lopez’s Instagram — included a feathered turtleneck, flutter sleeves and an open-back cutout. According to Vogue, this dress was worn by Lopez during the wedding ceremony. The gown’s dramatic train was reportedly hand-crafted from over 1,000 handkerchiefs and 500 metres of fabric cut into ruffles.

Later, Lopez added a cathedral-style veil to the look, providing that extra elegance and glamour.

Still elegant but sexier, Lopez’s second mermaid gown featured a plunging keyhole neckline embellished with Swarovski crystals. The back of the gown is also open with a crisscross detailing. She swapped her cathedral style veil for a shoulder length sheer hood.

Ralph Lauren posted a 60-second video about the making of all three of Lopez’s gowns. The video even features several of the sketched designs for her wedding dresses.

The ceremony took place under the specially crafted white metal framework of a church in the couple’s back garden overlooking the North Newport River. Delphiniums adorned the structure and nearby arches on the aisle’s walkway.

Lopez and Affleck were a famous “it” couple of the early 2000s (nicknamed Bennifer), and were consistently on the cover of tabloids at the time.

In late 2002, Affleck popped the question, though the couple called it quits in 2004 before exchanging vows.

ET reports Lopez and Affleck were on friendly terms, but reconnected after Lopez’s split from Alex Rodriguez in 2021.

Lopez has had a versatile career in both music and film, though she is best-known for her hit songs including Love Don’t Cost a Thing and her performance in the movie Hustlers. Affleck has played several leading roles in many blockbuster films including Gone Girl, Batman v Superman: Dawn of Justice and Argo.