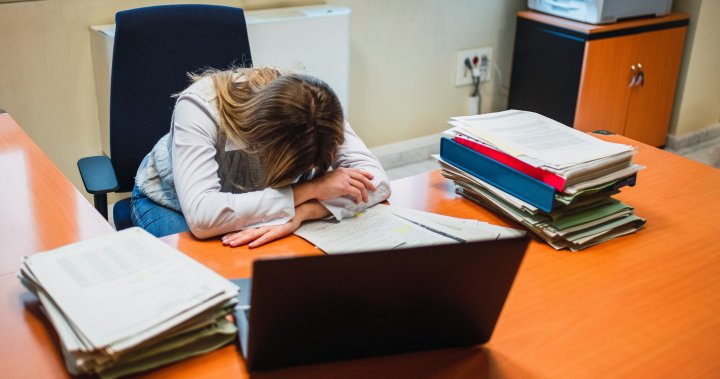 “Quiet quitting” is the latest term popping up on social media feeds, gaining traction among workers who are tired of going above and beyond for little return.

But, now, the conversation has turned to a related topic — “quiet firing.”

If your employer regularly expects you to do more than your job description for the same pay, call it what it is: quiet firing.

Makes a lot more sense than this “quiet quitting” nonsense.

Essentially, quiet firing happens when employers demoralize workers enough that they decide to leave on their own. This can happen in various ways, such as not responding to requests for promotions or wage increases, increasing workloads to an unmanageable level, or by snuffing out opportunities for career growth.

Everyone’s talking about ‘quiet quitting’ at work. Here’s what it means

Other terms for quiet firing include “constructive dismissal” or “managing out,” but regardless, it can be pinpointed with behaviour like micromanaging, leaving employees out of the loop, cutting back hours and other passive-aggressive workplace tactics.

Some people argue the problem doesn’t lie with those who are setting healthy boundaries between work and life, but instead lies with employers who create workplaces that are so awful the employee feels no choice but to quit.

“A lot of talk about ‘quiet quitting’ but very little talk about ‘quiet firing,’ which is when you don’t give someone a raise in 5 years even though they keep doing everything you ask them to,” Randy Miller, a software developer, tweeted, summing up the general sentiment.

Despite a buzzy new phrase for this type of behaviour, it’s clear that quiet firing is not a new concept. A recent LinkedIn News poll found that more than 80 per cent of workers have witnessed or experienced a quiet firing at least once in the past.

“I was TOLD as a manager some years ago that we were to do this, and these tactics were to ‘encourage people to take a new path on their own accord because they might not fit the culture’ … a.k.a. tiring them out so they’d leave on their own because there wasn’t enough to say they weren’t good at their job, or they weren’t doing their jobs. It’s disgusting yet a well-known way of management in many organizations. I’ve seen it done, I have experienced it as well,” Alexandra H., a creative strategist, wrote on LinkedIn’s poll.

“I’ve seen it firsthand with supervisors who feel threatened by your existence. You don’t know why but they simply want you out. You are constantly made to feel like you cannot do anything right even when you are hitting your goals,” shared Robin McCarson, a business owner and former senior vice-president of a home health care operation.

Matthew Fisher, an employment lawyer and partner at Toronto-based Lecker & Associate, told Canadian Business magazine that not every skipped promotion or change in workflow means an employee is being quietly fired, but if there’s a clear pattern or multiple instances of such behaviour, he says, it may be a sign an employee is being pushed out the door.

“Employees know in their gut that something is wrong … Taking away their duties, diminishing their title — it’s essentially death by a thousand cuts,” he told the magazine.

Fisher says workplaces might try to quietly fire employees when they want to avoid paying severance or jumping through HR hoops — especially when the employee hasn’t done anything that would justify termination.

That’s especially true in Canada, where the rights for terminated employees are “quite substantial” compared to the U.S., said Fisher.

Laura Williams, managing partner of Williams HR Law LLP and the CEO of Williams Consulting Inc., told Global News that quiet firing is “almost like a game of chicken for employees and employers.”

“Instead of … taking that tough decision of ‘we’re going to end the employment relationship,’ it’s ‘let’s see if we can get them to leave.’ And again, we won’t have that financial obligation to make the termination payouts.”

Linda Nazareth, a Toronto-based economist and host of the Work and the Future podcast, told Global News that quiet firing is a passive-aggressive form of making an employee’s life miserable, while not dealing with the problem directly.

“Honestly, if you are quietly firing people, it’s either bad management in that you’re trying to not pay them the layoff or you just don’t want to deal with this head-on. And you are allowing people to be there who you don’t really want to have there. So something’s not right.”

Williams says that managers who are attempting to quietly fire their employees should probably reevaluate their methods, as there can be harsh consequences if caught.

“First of all, if you are mistreating an employee and making their lives miserable within the workplace, you could be held liable for committing a constructive dismissal. And constructive dismissal is when the employer unilaterally changes the material conditions in terms of an employee’s employment,” she said, also warning of the risk of diminished workplace morale, and that employees could allege workplace harassment over passive-aggressive behaviour.

“I don’t see how there’s a win in having people not be engaged and not contributing to the best of their abilities. So it is definitely not the culture you want to create,” she said.

If you’re worried that you’re being quietly fired, Forbes magazine contributor Jack Kelly advises that you speak directly with your manager or supervisor about your concerns.

“Although it may be a lost cause, you may want to have a conversation with your boss. Share with your manager that you feel that you’re being unfairly persecuted. Provide facts, data and any correspondence from co-workers and clients that show you are in fact a productive worker and good at your job,” Kelly writes, adding that employees need to be direct “since you have nothing to lose at this point.”

Kelly says a frank, direct conversation can help clear the air, especially if an employee works to incorporate any feedback given by a higher-up.

“Since it’s a two-way street, the manager must put aside their animosity and view you in a fresh new light untainted by past prejudices.”