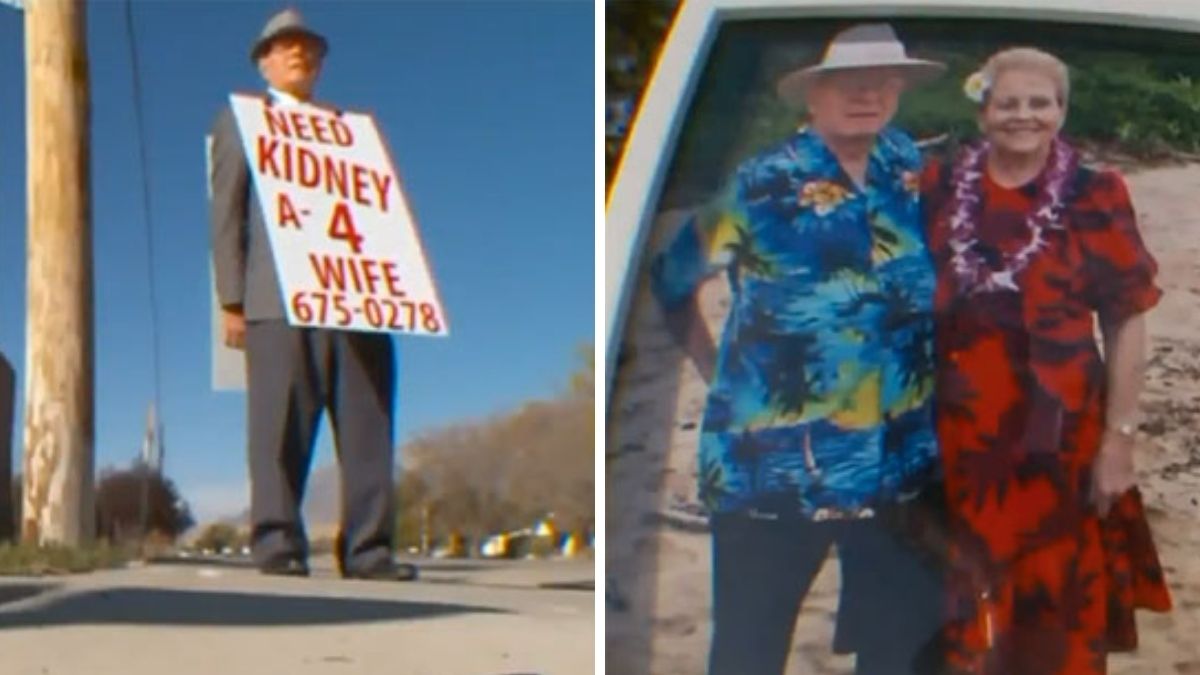 74-year-old Wayne Winters, of Farr West, Utah, was desperate to find a kidney for Deanne Winters, his wife of 26 years, who has stage 5 kidney failure.

However, finding a kidney isn’t as simple as going on Amazon. According to the National Kidney Foundation, there are 3,000 new patients added to the kidney donor waiting list each month, and 13 people die every day while waiting.

The clock was ticking fast

Refusing to wait idly, Winters decided to take matters into his own hands – or legs.

They can look at my sign, they can’t go home in a hurry.

It wasn’t long before he went viral and the calls started pouring in.

“I was just so overwhelmed. I didn’t know what to think,” Winters said.

In the end, the donor was someone who had passed away, but is now giving new life to Deanne. Winters is grateful to have more time to spend with his soulmate.

If she can have a good five years that would be awesome, we can have our life back.

To no surprise, Winters’s march for his wife had many in their feels.

“Aw that man was so determined and selfless. His dedication to his wife is really quite touching,” commented one.

This grandpa made me cry in front of people when I was having my coffee at a cafe..what a pure way to express his love. We need more people like him.

Yet another saw Hollywood potential, posting “Gotta be a movie made. Proactive and creative man..respect.”

Love has no limits

Grateful for his wife’s renewed life, Winters continues his walks with the sign to help others have the same good fortune he did.

“I will spend more of my days walking with my sign to see how many I can get,” he said. “Think about it, we could start a kidney revolution and that would be so great.”

Wayne Winters’s love for his soulmate gave his old frame the strength of an army that wouldn’t be stopped.

Throughout our life, we’ll go through plenty of clothes, cell phones, and Netflix shows, but the people we love are irreplaceable. You can bet that when we find them, we’ll do everything to spend every minute on earth with them.

“A lifetime of love stays strong and resilient when it is in the purest of its form.” – Anonymous

Gary Vaynerchuk’s Life Advice Will Change Your Future | Gary Vaynerchuk Motivation (Gary Vee)
In Honor of Groundhog Day: 5 Hilarious Times Bill Murray Made Someone’s Day a Little Extra
Looking for love? 44% U.S. adults use dating apps to find long-term partners: study
He Was Fatally Beaten by Memphis Police — Now People Around the World Are Sharing #SunsetsForTyre in His Honor
Podcast: What to know about “novelty hunting.”