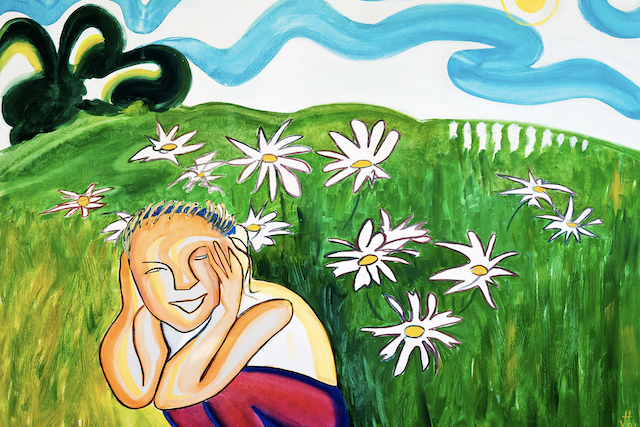 There’s a funny thing with us humans.

We spend our lives trying desperately to find happiness, and yet we don’t even know what it is. We can’t explain, describe, or define it. We just know that we want it because it’ll make everything peachy. Time and time again, though, studies have shown that our never-ending quest for happiness is quite often the very thing that makes us miserable.

Trying to find happiness is an exercise in futility. This is a truth I did not easily come to realize. It took a succession of major depressive episodes, the sudden death of my father, a cross-country move, a broken heart, and countless hours reading airy-fairy, self-help nonsense for me to understand that instead of trying to find happiness, I should consciously take steps that let happiness find me.

But given my endless fascination with the subject, my work as a coach, and my ever-present desire for more street cred, I recently found myself immersed in a year-long Psychology of Happiness certification program created by best-selling author and former Harvard professor Dr. Tal Ben-Shahar.

During the program, we were asked:

What was one of the happiest periods of your life?
What did you do during that period that made it so good?
How can you generate more happiness in your life?

I had a profoundly difficult time answering these questions, particularly the first two. But the more I scanned through my mental scrapbook, the more I kept thinking about the months between ninth and tenth grade—my last romp as a camper at the sleepaway camp I’d been going to for six consecutive summers.

It wasn’t so much what I did—or what we­ did—that made it so good. I think, perhaps, it was what we didn’t do.

There were no smartphones. So, there were no screens to stare at, no calls to make, no messages to check, no constant dinging notifications.

We weren’t constantly comparing ourselves to others while looking at the carefully curated highlight reels from their lives.

There were no dating apps, no heads to swipe on for hours at a time. There was no ghosting, no haunting, no orbiting, no zombieing, no submarining, no breadcrumbing, no roaching. These hyper-specific subtypes of appalling human behavior simply didn’t exist.

And despite our raging hormones, there was no palpable desperation. You either “hooked up” with someone the night before or you didn’t. Then, you moved on with your life.

There was nobody on the far left trying to ruin the life of anyone who’s ever made a mildly offensive quip. There was nobody on the far right trying to accelerate conflict and build some kind of white ethnostate. There were no conspiracy theorists trying to convince the world that celebrities run pedophile rings out of pizza parlors or that Jewish folks crisscross the country to start wildfires with space lasers.

Oh, but Tony, you might be saying to yourself. There were definitely people like that back then! And you get no argument from me.

But we never heard from them. They didn’t have public platforms. There were no 24/7/365 news channels, there were no online news magazines, and there was no YouTube; so, they just kind of kept their crazy crap to themselves.

It’s no wonder that one of the happiest periods of my life was the summer of 1997, in the middle of nowhere in northern Wisconsin. We spent all of our time in nature, laughing and singing and bonding and playing frisbee.

One could theorize that we were happier purely because we were kids, but I’m not so sure. From what I can tell, kids today are lost, distracted, and isolated. They spend most of their time indoors, glued to their devices. They are overstimulated, oversensitive, and overprotected. They are riddled with anxiety and depression as they deal with the psychological trappings of growing up in a technological world.

Twenty-five years ago, during the summer of 1997, life was just…simpler.

That’s what made it so good.

And I don’t think that life in general will ever be that simple again.

Every time I de-clutter, I’m a little bit happier.

Every time I delete a dating app, I’m a little bit happier.

Every time I forgo watching the news or sign off social media, I’m a little bit happier.

Every time I turn my phone on Do Not Disturb, I’m a little bit happier.

Every time I have a real conversation in real life with a real person I really care about, I’m a little bit happier.

Every time I go outside and walk around and do nothing but look at the sky, and the trees, and the architecture, I’m a little bit happier.

Every time I sit in silence and meditate and let my thoughts pass by like the weather, I’m a little bit happier.

So, how can you generate more happiness in your life?

Well, I don’t have a whole lot of street cred. But if I had to take a stab at it: Stop doing the things that cause you unhappiness. Simplify, simplify, simplify. And maybe find a summer camp for adults.

Tony Endelman is an author, blogger, humorist, certified transformational life coach, and certified happiness trainer. He currently lives in New Orleans. Catch up with Tony on his website.