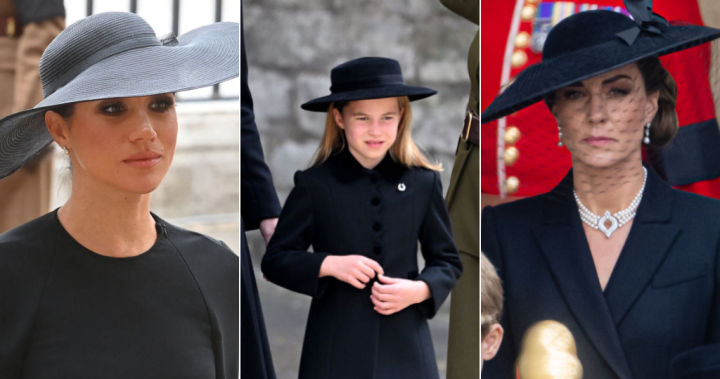 Princess Charlotte, the Princess of Wales and the Duchess of Sussex each expressed a sweet tribute to Queen Elizabeth II during her funeral Monday morning by wearing outfits that paid homage to the late monarch.

Charlotte, seven years old, wore a hat for the first time, marking a grown-up gesture to her great-grandmother. She matched her mother, Kate Middleton, by dressing in a long black coat, black tights and black shoes. She also honoured the Queen with a small diamond brooch affixed to her coat in the shape of a horseshoe, which is certainly a tribute to the queen’s well-known love of horses.

Kensington Palace confirmed the pin Princess Charlotte wore was a gift from her great-grandmother herself.

Charlotte’s mother, Kate Middleton, joined her daughter in honouring her late grandmother-in-law by wearing a four-strand pearl necklace with a diamond clasp that was originally owned by Queen Elizabeth.

It’s the third time the Princess of Wales has chosen to wear the sentimental piece — she first wore it to the queen and Prince Philip’s 70th wedding anniversary in 2017, and again at Prince Philip’s funeral in 2021.

The queen was known to love pearls and could often be seen wearing her signature three strands of pearls at many outings and public events. She was even seen wearing them in her last-ever portrait, which was released on the eve of her funeral.

Meghan Markle, the Duchess of Sussex, also chose pearls for Monday’s solemn occasion. The pearl earrings she wore were a 2018 gift from the queen, which were worn by the Duchess during her first and only joint appearance with her.

Since the queen’s death on Sept. 8, the Royal Family has been seen paying tribute to their beloved matriarch many times, and have often worn small mementos and jewelry with their mourning outfits as a gesture of remembrance.

Middleton was spotted wearing the queen’s beloved three-strand pearl necklace to a reception for the governors-general of the Commonwealth nations over the weekend.

Markle has been seen wearing her pearl earrings at several events over the past nine days.

Great Britain and the world said goodbye to Queen Elizabeth II on Monday during a state funeral for the 96-year-old British monarch that drew not only leaders, but everyday people from around the globe.

Elizabeth, who sat on the throne for 70 years, died on Sept. 8 in her beloved Scottish residence, Balmoral Castle, alongside members of her family. Her son, King Charles III, became head of state for the United Kingdom, Canada and other Commonwealth Nations.

A day packed with events in London and Windsor began early when the doors of 900-year-old Westminster Hall were closed to mourners seeking to see the queen lying in state. Since Wednesday, hundreds of thousands had waited for hours in line, including through cold nights, to attend the lying in state in an outpouring of collective grief and respect.

Following the service, the queen’s family accompanied her coffin from the medieval cathedral in a military procession that carried her to Windsor Castle as a vast crowd looked on from the sides of London’s streets.

Members of the RCMP were near the front of the procession which included armed forces members from Canada and around the Commonwealth.

Deliveryman Arrives to Pick Up an Order From a Bakery – Breaks Down When He Finds Out Why His Own Name Is on the Package
Parents issue warning after teen dies from inhaling aerosol deodorant
How to Be Intolerant of Dysfunction | Josh Shipp | Goalcast
Sweet Revenge: Woman Wins Lottery Jackpot After Husband Leaves Her for Best Friend
This Year, Let Go Of The People Who Aren’t Ready To Love You