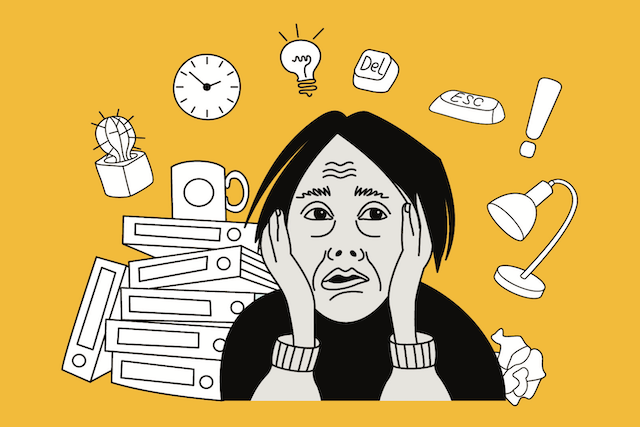 “The shortest way to do many things is to do only one thing at once.” ~Samuel Smiles

I am a recovering multitasker.

I’m sure you know what multitasking is—it is the performance of more than one task at a time. For me it can look like this: “Watching TV” might include scanning social media on my phone, playing a game on my laptop, and/or doing some knitting or embroidery. Sometimes I switch back and forth between all of those things.

“Writing a blog post” might include doing a load of laundry, including moving it from washer to dryer, or folding it. It might also include research, social media, fixing a snack or meal, checking email, texting my kids, and more.

I not only used to multitask my way through each day, but I also used to pride myself on it. I would run multiple errands while making phone calls to schedule appointments, which meant I had to open the calendar on my phone as well. I’d cook dinner while scrolling social media while listening to the evening news, while also writing a grocery list.

“I am so productive,” I’d think. “Just look at all the things I am doing.”

Only I’d forget to move the clothes from the washer to the dryer, so they sat overnight and started to smell funky. Or I’d forget one of the most important parts of an errand or a phone call. Or I’d get distracted by reading something on my phone and the onions I was meant to be browning would burn.

Asking your conscious mind to do multiple things at once is more difficult. The human brain can’t do all that many things simultaneously. It’s good at the stuff controlled by the autonomic nervous system—keep breathing, keep the blood flowing, etc.

Essentially what happens when you multitask is that your brain toggles rapidly between two or more tasks. The more you try to do things simultaneously, the more likely it is that something will be lost or dropped as your brain tries to switch focus.

The same goes for switching tasks at work, about which there are many, many articles. It’s not unheard of to be writing an email or memo, but be interrupted by phone calls, people stopping by your desk, and other emails or texts. Every single interruption requires you to switch your focus, then return to the writing.

Each time you switch your focus, whether it’s due to an interruption or multitasking, it takes your brain time to reorient itself and get back on task. It can take seconds sometimes, but often requires minutes. The more you switch tasks, however briefly, the more time you spend getting back on track.

Multitasking can reduce your productivity by as much as 40 percent, according to an article in Forbes. It’s not efficient, either in time or output levels.

But that’s not the real danger. Multitasking is not good for your brain processes or mental health. It can lead to increased frustration, irritability, and stress.

Studies show that media multitasking in particular, such as scrolling social media while watching something on a separate screen, or switching between social media sites, can lead to social anxiety and even depression.

The more we “multitask,” or switch between tasks, the more we distract ourselves and interrupt our thought processes. It can cause us to become anxious, as we worry that time is slipping away from us.

In November of 2021, faced with an ongoing pandemic in the world and a sudden bout of fatigue at home due to my autoimmune issues, I began to try to single-task as much as possible.

My thought process, having read all sorts of articles on brain health and multitasking, was that maybe it would be better if I didn’t ask quite so much from my brain. Due to fatigue, my thinking was often fuzzy or foggy to begin, so I reasoned that focusing on one thing at a time might feel like self-kindness. It yielded some interesting results.

I was right about single-tasking being kinder to myself. If I only expected myself to do one thing at a time, it was easier to focus and to see the task through. I applied single-tasking to rest, as well as to household chores and work.

I found that single-tasking allowed me to pay more attention to whatever I was doing. If I was writing a blog post, I was able to write it more quickly by “just writing” than when I was writing the post, jumping to create graphics for it, coming back to write more, hopping to a different site to do some research, then returning to write some more, etc.

Single-tasking also led to me breaking complex tasks into smaller, more manageable pieces, each of which got their own allotted time. So I would come up with an idea, then research it. Write the blog post, then go create the graphics I needed. And so on.

On the one hand, I was doing all the usual tasks needed to create a blog post, only instead of multitasking by hopping between them, I did them one at a time. I was shocked when I found that I saved as much as an hour of my time by compartmentalizing those components, then single-tasking.

In addition, I realized that when I focused on one task at a time, I gained the sense of satisfaction at being able to actually complete my projects. I felt more accomplished. And if I had to take a break, it was much easier to see where I needed to pick things back up.

Instead of having five open, “in progress” items on my to-do list, I had one at a time. There is tremendous satisfaction in crossing things off the list and moving on. On days when my fatigue was particularly bad, I was also more likely to tackle something when I knew it was a smaller piece that could be completed quickly.

In addition to feeling more productive, my overall stress levels fell. I was able to see daily progress, and celebrate it. I started to get a better handle on how much I was capable of realistically accomplishing.

It felt so much easier, especially once I worked out that I would get as many—or more—tasks done in a day by single-tasking as I did when I multitasked. By focusing on one task at a time, I cut down on how many times I interrupted myself with additional items. I found that I often finished sooner, giving me more free time and breaks between tasks.

These days, I try hard to move to single-task whenever I possibly can. To do one thing at a time, or focus on one task at a time, rather than trying to accomplish multiple things at once.

Some days, that is easier than others to accomplish. But always I find that when I succeed, my stress levels decrease. My ability to focus and finish things increases.

And just as the studies report, the amount of stuff I get done actually increases, too.

Here are some tips to help you try this for yourself:

1. Put your cellphone on silent when you are trying to do computer work.

2. Use a social media blocker app such as Freedom if you need to. It allows you to set time limits on your usage, and to prevent you from “just checking one thing,” only to get sucked down a rabbit hole.

3. Create a to-do list for yourself each day with no more than three priorities on it. Tackle them in order, one at a time. Once they are done, you can relax your boundaries if you want, or continue on to another task.

4. Set a timer to focus on a task. Allow yourself a break, or even to be done with that task for the day, when the timer goes off.

5. Challenge yourself to put your phone and laptop away when watching a movie or television show, allowing yourself to focus only on what it is you are watching.

6. Set up a reward system for yourself to encourage single-tasking behavior.

7. Don’t get upset or throw in the towel if you “catch” yourself multi-tasking. It took you a long time to develop that habit, and it will take a while to unlearn it.

As I said at the start of this post, I am a recovering multi-tasker, so I don’t yet have this all down pat. If you need me, I’ll be over here practicing how to focus on just one thing at a time.

Kelly Ramsdell is the founder and CEO of Actually-I-Can, Inc, which helps help people who identify as female or non-binary to reclaim and redesign their lives with aligned ease. Her e-books and programs are available at http://actually-i-can.com, or you can follow her on Insta, Facebook or Twitter.