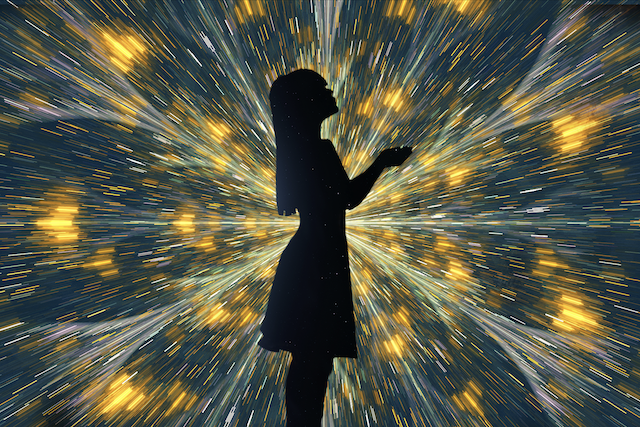 “What the caterpillar calls the end of the world, the master calls a butterfly.” ~Richard Bach

I have always wanted to create a family.

As a child, I lovingly cared for my dolls and fell head over heels for my college boyfriend. Kneeling before me with a ring, he said, “I want you to be the mother of our children.” I swooned as we walked down the aisle at the tender age of twenty-two, convinced I was set for life. I had the husband, and I would have the family.

I entered into our marriage with the expectation and security of certainty. We had vowed to be together for life, so I believed that was the truth.

But I had another love besides my husband.

I was in love with performing.

After a childhood of classes in the arts, I was accepted into the BFA Musical Theater Program’s inaugural year at Penn State University. I soaked every minute up and graduated with summer work already booked and the plan to move to New York City with my new husband and dive into my career.

Creating a family could wait. Broadway was calling.

Except I found myself hitting a ceiling. Despite working consistently as a professional, Broadway eluded me. With the exception of two Broadway shows that closed before I would have joined them, I would choke when I was invited back for a second or third audition, and never make it any further.

I was a true triple threat, strong in my singing, dancing, and acting, but I didn’t know how to deal with the loud and critical voice in my head. When I needed to deliver my best at these big moments, the critic would become deafening and my voice would crack or I would spontaneously “forget” which leg to step forward on while I was dancing. In those moments, it was as if all my training went out the window.

Over time I was losing confidence. I literally worked at every level except Broadway. I worked off-Broadway, regionally, did national tours and commercials, and kept auditioning in hopes my break would come.

The security and certainty I had clung to in my twenties evaporated in smoke. I lost my marriage and the ability to create the family I had desired for the last fifteen years.

In the face of my ddivorce, I felt a great urgency arise. It fueled me to heal emotionally, spiritually, and mentally from my heartbreak and to seek the right support to guide me as a single woman. I worked with love coaches and therapists and joined women’s groups to help me make sense of how to find a life partner.

And then four and a half years later, I went on a first date with a kind blue-eyed man who took me to the Brooklyn Botanical Gardens and gently opened an umbrella over my head as rain began to fall. In all the dates I had been on, I had never felt like this before, and we quickly fell in love.

Before I became exclusive with him, I asked how he felt about creating a family and was thrilled when he shared that was his biggest desire as well. We were married a year and a half later and began to try naturally to get pregnant.

Creating a family was now. There was no more waiting. I had the husband and the security. Certainty had returned to my life again.

Except after a year of trying, nothing had happened. So, we entered into IVF as I had frozen my eggs after my divorce for this very reason. We followed all the steps, and I was convinced this was going to work. With the number of fertilized eggs, I imagined we had two tries and I was completely open to twins. But on the day of the transfer, only one egg was ready, and the other three became unusable.

The pressure was unmanageable. I was experiencing migraine headaches from the synthetic hormones and was terrified it wouldn’t work. Which it didn’t.

I vowed I was done with the drugs and our family was either going to happen through natural causes or through adoption.

A year later, I found myself staring at a positive pregnancy test.

My husband and I were giddy beyond belief, and began to read children stories to the growing life inside me.

Creating a family was now. There was no more waiting.

Except just before my eleventh week, I stared at an ultrasound with no heartbeat. The white light that had fluttered with such ferocity at seven weeks was now a static white dot.

While we went back to trying, my heart was broken. Nothing was happening, so we entered into the process of adoption.

Within two months we were matched with a birth mother, and I wept when we got the call. The birth mother had just entered her second trimester, so we had several months to wait.

Now we could prepare! I dived into podcasts, books, and workshops, learning everything I could about adoption, about being a trauma-informed parent, and what products felt most aligned with our values. I created a registry, and we both planned to take time off work.

Creating our family was now. There was no more waiting.

And then a month before the baby’s due date, the birth mother changed her mind. In adoption, they call this a disruption, and that is exactly how it felt.

I found myself reliving every pillar of my journey. Choosing Broadway over family. The divorce. The failed IVF. The miscarriage. And now the disruption. I wasn’t just mourning the recent loss; I was mourning decades of a desire that had burned in my womb.

I thought it was the end of the world. End of certainty.

I found myself feeling completely disoriented. I had planned maternity leave from my business and set up an elaborate schedule for my approaching book launch all around the adoption. I had a nursery filled with a stroller, changing table, clothes, and a glider. I had thought of everything.

I pulled an Oracle card from Alana Fairchild that read, “This comes with special guidance for you. More love is rushing towards you like a great cosmic tsunami. You will struggle with this blessing to the extent that you will attempt to hold onto what has been. So don’t. Let go. You’ll perhaps get some water up your nose, but nothing will come to you that you cannot handle. Instead, you’ll have no idea what is going on. Oh, how the tsunami will deliver you into your divine destiny!”

I started coaching my clients again. We went back to being active again with the adoption agency. I started my book marketing tasks again.

But none of this had any certainty or definitive timeline. After decades of knowing the exact day and time things were going to happen, I embraced not knowing.

I embraced waiting. Because it seemed there was nothing else to do.

It felt like a part of me was dying, the part that had planned my family with such ferocity and certainty.

In my grief, I turned to the Oracle deck’s guidebook and saw Robert Brach’s quote. As soon as I read it, I began to weep in resonance.

How I had strived to stay the caterpillar.

But the caterpillar couldn’t transform with these values. It needed to be washed up on the waves of love, and finally enter the cocoon to grow into a sacred butterfly.

Robert’s words speak to that profound moment when we recognize that the way we’ve been living our life doesn’t work anymore. If we want to grow, we have to let go of our clinging, specifically our clinging to certainty.

Because the truth is, our greatest power comes in the acceptance of not knowing.

If you “don’t know” then you are actually opening yourself to a limitless life, one that is led by divine timing, instead of what your ego wants to believe is “right.”

What if experiencing the same thing over and over is actually a divine tap on the shoulder to try something new?

What if being disoriented and not knowing when your desire will arrive is the softly spun silk surrounding your most vital soul?

For me, the tsunami washed me up on the shore with sacred wisdom. No longer holding onto a timeline was actually a deep relief. Going through the cycle of trying to control every aspect of creating my family had been so taxing and exhausting.

I had formed a castle of certainty with bricks and stones, only to discover it was actually made of sand. And when the waves crashed through, I saw it was never meant to last. It was always meant to wash away.

I don’t know when my family will come. I have no idea how my desire is going to manifest. Perhaps my life has actually been working out beautifully, creating a divine path I may not have “planned” but one that has sparked a vital inner transformation.

One that has opened me to the possibility of my life unfolding in a new direction. And with that, I can let go of crawling on the ground in vain as the caterpillar. Now I can just open my wings and fly.

Now I can simply receive.

Nikol Rogers is a speaker, writer, and empowerment coach who helps people reclaim their confidence, expand their perfect audience, and bring their fearless vision to life. She has taught her ZenRed Method globally and has helped her clients become a more confident version of themselves and in alignment with their true purpose through her signature course, Powerful Presence. Her work can be found at NikolRogers.com and @Nikol_Rogers.

This Year, Let Go Of The People Who Aren’t Ready To Love You
Why Change is Good | Motivational Video | Goalcast Motivational Speech
Four Priorities for Talent Acquisition Leaders in 2023 (i4cp login required)
Waitress Soothes “Fussy and Teething” Baby So Mother Can Finish Her Meal
7 Ways Childhood Trauma Shows Up in Your Romantic Relationships