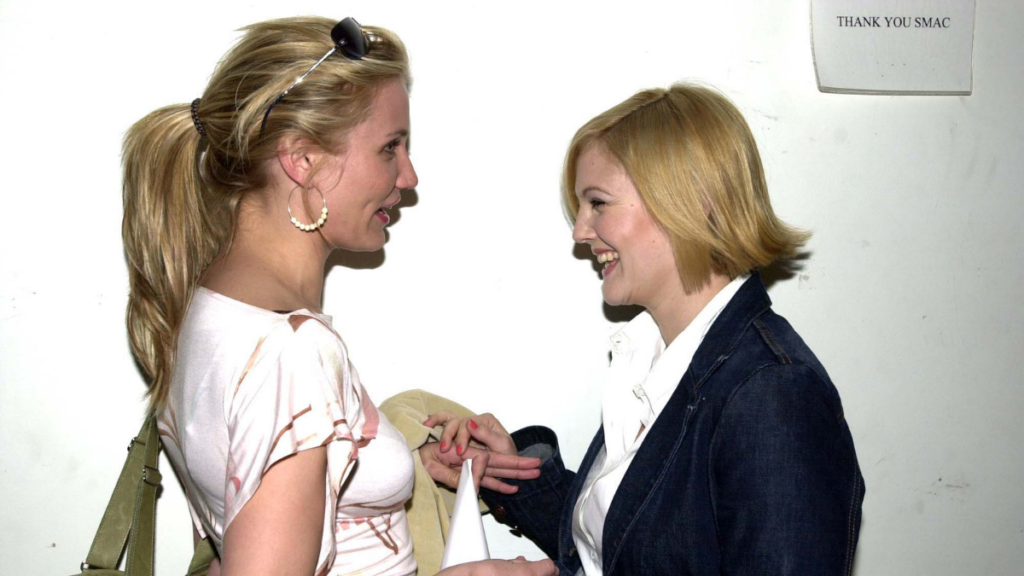 Aging literally means living. The process of growing older quite directly means that you have survived life up until a given point in time. And yet, the process of demonstrating survival through ageing is somehow marked as an undesirable trait. Particularly for women.

On September 15th, 2021, Drew Barrymore posted a photo of herself and bestie Cameron Diaz to Instagram.

Drew is regularly in the spotlight these days with her self-titled show The Drew Barrymore Show, however Cameron is notoriously more removed from the public eye.

The photo of the two best friends received an overwhelming response

When I look at the photograph, I see a crisp and clear closeup of the two best friends with a caption that reads, “Bestie hour with my bestie poo poo!! @camerondiaz @thedrewbarrymoreshow.” In the photo, Cameron’s signature piercing blue eyes pop as she sports a fun bright red lip and Drew is clad in a gorgeous ensemble with a flower at the neck and her inviting smiling face is resting on Cameron’s shoulder.

When you look a little bit closer, you can see the 1.5 million likes and 15 thousand comments. That’s a lot of chatter. And then you notice the comments themselves.

One Instagram user writes, “No filters or fillers, I love this!!!!!! Absolute beauties.” Another writes, “I love seeing my fave Hollywood celebrities aging with such grace and beauty… as I also am about the same age. Love you both.” And another commenter says, “How refreshing to see two women aging gracefully! This is beautiful and important for all young and impressionable women to see!”

All aging is a result of our trillions of cells aging, and once you understand the science, it gets way less scary.

I am guilty of using photograph filters. I don’t really wear makeup (although I have been experimenting with it as of late), and so I often rationalize that by using an enhancing filter which makes it look as though I have worn makeup. It’s second nature to me at this point.

I was late to the filter game. I found the distortion of my face to be a little too Black Mirror for my taste. Now I’m stuck using a violet toned filter on Snapchat for a good portion of my photos. They give a nice glossy effect and add a touch of makeup that’s not too extreme. I am also partial to anything that has a cool effect with light, so that’s a factor as well.

But filter-less photos make me feel a certain type of way. I’m worried that using filters is predominantly for teenagers and not for my grown adult self.

And so, bearing my own recent habits in mind, I can understand the Internet’s reaction to a beautifully striking photograph of two Hollywood women that is not heavily edited and where the women are natural and filter-free.

The overwhelming response to the now epic selfie of The Charlie’s Angels alums requires further thought. So, riddle me this: since aging literally equates living, why then when the indicators of the fact that we have “lived for X number of years” shows up, people are horrified instead of embracing the change?

I’m now determined more than ever to show my daughters that aging is a luxury. If we’re lucky, we are all going to age. I just want them to be at peace with who they are and not what they look like.

As a society our perception of aging, especially for women is backwards. Men are often referred to as “refined” as they grow older while women get terms like “old maid” and “spinster” associated with the process of aging. It discourages the healthy mental standpoint of embracing and celebrating your years of acquired wisdom, lessons, skills, experience, knowledge, and more.

Aging is like seeing the rings on a stump of a tree that indicate the years that it has been on the planet. We find the concept beautiful on a tree and yet unattractive on ourselves. We need to learn to embrace growing older and even celebrate it so that more people fall deeper and deeper in love with the person in the mirror everyday instead of the opposite.

It’s time to honor and accept yourself

When we associate aging with wrinkles and lines instead of things like survival and the acquisition of knowledge and beyond, we devalue our existence. I am personally of the belief that I am a spiritual being having a physical experience, not the other way around. With that logic in mind, I honor my rings. They are badges of honor in their own right, and they indicate to myself and the world that, “I am still here, and I have been here for a while.”

Sure, it feels nice to be asked for your ID when you’re almost double the age, but it feels better to be respected for the value your life experience brings. Your time on this planet is precious. The hunt to continuously look more youthful requires time, effort, money, and focus.

Your energy on this planet is limited. We all do different things to make ourselves presentable to the outside world. Some sport a Rolex every day, or a full face of makeup and some put on a brave smile. Whatever you do, make sure the present is where you are, because if you’re worried about evidence of the past on your body then your focus isn’t on your future.

Aging is a gift, it means you are still here. Every day of life provides another opportunity to get it right. Falling in love with yourself even more, every day, means also accepting your indicators of time as you grow older. Change is inevitable with ageing, self-resentment is not. Learn to love your indicators of time, and try to invite more smile and laugh lines in while you’re at it.