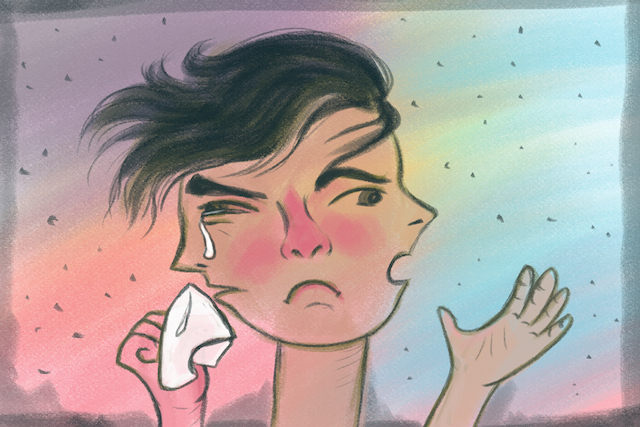 He is close to tears. He is not physically hurt. No ankle has been twisted, no knee has been scraped, nobody needs their asthma inhaler.

The other boys are making fun of his size.

Most of the time he pretends it doesn’t bother him. But I’m the coach, and it’s pretty hard to miss.

I have watched him smile and try to shake it off. Sometimes he will parry with a comment of his own—something about them that they’re sensitive of…

I know this thing that they are doing. I call this “emotional arm punching.” It’s a rite of passage boys use to desensitize themselves to emotions, just like when they punch each other repeatedly in the bicep and try not to show how much it hurts.

For about two months out of the year I am entrusted with seeing some of the real feelings these kids have. The reason why I get to see them is because they haven’t yet been taught not to allow themselves to feel them. They haven’t been taught that emotions are a weakness. But I can tell you this, it is definitely beginning, and this emotional arm punching, especially with boys, is the sign of it.

This term I’ve coined—emotional arm punching—you see it all the time on playgrounds, middle and high school sports, probably even in the Boy Scouts. Maybe you remember it from when you were younger? It’s the tiny emotional jabs you take at your friends about things that you know they’re sensitive about that hurt their feelings.

I know this well from my own experience. I was called stupid and berated by my coaches because, try as I might, I could never remember the plays.

The other players would use the coach’s opinion of my play to deflect the attention from their own failings by coming after me relentlessly for my inability to remember plays, or, even worse, if I let down my guard and told my teammates how the coach’s remarks made me feel.

Ultimately, I found myself deflecting my emotional hurt, hurling my own insults or digs back on my teammates about their performance.

Now, if you asked most people, they would say this is a rite of passage in our society. You’re learning how to “be a man.” You’re learning to not let emotions affect you.

Unfortunately, I can tell you this firsthand: it doesn’t teach kids not to have emotions. What it teaches them is to not tell or show anybody what they are feeling and to repress their emotions, just like I learned to do.

With no one to help me actually work through my feelings, I found myself stuffing down my embarrassment and shame until those emotions became a roaring anger. That anger would ultimately become disproportionately intense. However, with no place to go, it would erupt from me when I least expected it—often on my friends or my mom.

Kids are being called short, fat, ugly, or any unacceptable thing that their friends (or even those who aren’t their friends) say about them—under the flag of jest of course.

What is the result? You get a bunch of kids that start to learn that they are not supposed to react. They pretend emotions don’t bother them. But in reality? They hurt doubly worse because they can’t get any support or acknowledgment for what they’re feeling.

Why does this matter? Because those circles you see on the sports fields, in the schools, or even the Boy Scouts, you’re going to see when you’re grown up and go to the holiday party, bowling team, or men’s club. It’s the same people.

They grew up and their emotions are so repressed that they come out in much more unhealthy or even lethal ways. Think excessive drinking, angry outbursts, isolation, domestic violence.

Adults who learned to repress their emotions as children end up resorting to finding ways to numb those emotions that are seeping out because they didn’t learn the tools to process them.

And then there’s blame!

Blame is when our ‘uncomfortable emotions’ cup runneth over inside of us. When we give emotions like fear, anxiety, and anger a nice, comfortable home outside of us by spilling them all over someone else in the form of blame.

in her Ted Talk, The Power of Vulnerability, internationally renowned speaker, storyteller, and researcher Brené Brown said that blame is described in research as a way to discharge pain and discomfort.

Blame is acting out your anger instead of dealing with your emotions and the problem that’s in front of you. I had this a lot!  Eventually, however, I recognized the pain my actions and outburst of anger caused my friends and loved ones ultimately silenced me and, for a long time, kept me from making real connections in my life.

If we want men to be more aware of and able to identify how they feel so that they have choices instead of reactions—choice of the challenges they will pursue in their lives, the relationships they will create, the work that will satisfy them, and the kind of father they want to be—we’re going about it all wrong.

One of the best tools I’ve learned when dealing with my feelings is what I call “emotionally testifying.”  This starts with developing a practice of becoming familiar with all of your emotions, not just the ones that we as men find socially acceptable.

Recognize what your emotions feel like in your body. Then, have the courage to express them to trusted friends and family, describing how you are feeling and why you think you’re feeling that way.

This familiarity with uncomfortable emotions allows you to start to trust yourself with expressing them. They’re not foreign to you, or something to be afraid or ashamed of.

As you become confident at identifying and expressing your emotions with people you trust, you’ll be able to respond differently when you later find yourself with a group of other guys, and that emotional arm punching begins.

Instead of perpetuating this socially accepted, but emotionally unhealthy norm, you will have the skills to express how you feel about what’s being said in a way that is authentic to you without harming anyone else.

I believe it is more masculine to identify and understand your emotions and to acknowledge and accept when you hurt someone else’s feelings. Just because somebody said something to you that hurt you doesn’t give you the right to go off and put those hard feelings out on someone else. That is not a sign of strength.

Strength is knowing how you really want to feel and interacting with your friends from a place of honesty and empathy.

If you want to learn to trust yourself and your emotions, tell your friends how you feel. If they give you a hard time, you will recover and be healthier for it. And you never know, they might follow your lead and give you an emotionally honest response back. Either way, it’ll save a lot of emotional bruising.

Lou Bevacqui, M.Ac., L.Ac. is an emotional resilience coach, national speaker, author, and founder of the START Right Virtual Performance Coaching & Acupuncture. A resident of the Vermont for over 20 years. Office in Waterbury Vermont. Like so many others, he has pivoted his business and now provides performance coaching and acupuncture services virtually and in his private office in Waterbury, VT. Learn more at: loubevacqui.com

‘Gen Z yellow’: Next ‘it’ colour or marketing ploy?
How to Show Up When Nothing About Your Life Is Perfect
The two kinds of productivity advice
Why I Didn’t Trust Myself to Make Decisions (and What If It’s All Okay?)
Haute couture goes ‘surreal’ and upside-down at Paris fashion show