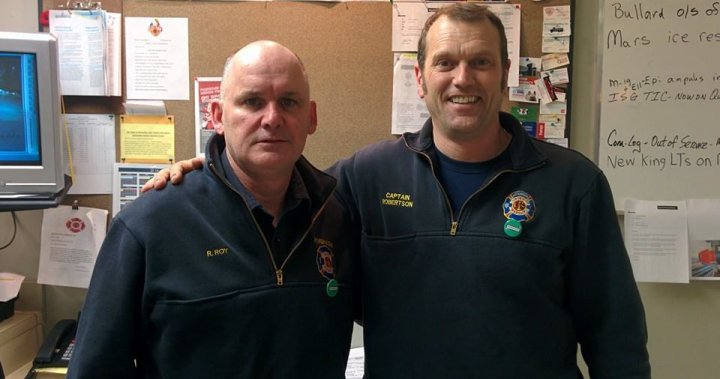 In New Brunswick, Riverview’s Fire & Rescue Department is a small force. Made up of 23 full-time members, it couldn’t afford to send manpower to New York City in the wake of the 9/11 attacks.

“I guarantee you any one of us would’ve went if we had the opportunity to help,” says Capt. Dwight Robertson.

The 30-year veteran in the field says he was home that day but went into the station to be with his co-workers as the news unfolded.

“I was devastated, overwhelmed with sorrow.”

READ MORE: ‘We focused on remembering our dad’: the grief and growth of a family ravaged by 9/11

Robertson says it’s not just the image of that second plane hitting the World Trade Centre or the towers collapsing, but the sounds that followed.

The beeping of hundreds of firefighters “man down alarms” filling the streets around the rubble.

“All you could hear was those alarms,” he says. “They were going off everywhere.”

A “man down alarm,” otherwise known as a Personal Alert Safety System (PASS), is a personal safety device built into a firefighter’s breathing apparatus.

The device sounds when motion isn’t detected, alerting others of a firefighter down — injured, or worse.

“Being a firefighter, I recognized what those alarms were,” Robertson says. “I’m not 100 per cent sure the general public would. They might’ve thought it was a car alarm or an alarm in a building nearby.”

For him and other first responders glued to the TV that afternoon, it wasn’t just beeping.

“You know those sounds are the sounds of one of your brothers and sisters in trouble — forget about hundreds of them.”

There were firefighters from elsewhere in the Maritimes and across Canada that travelled to New York, if only for funerals and vigils.

Robertson says he and his coworkers in Riverview found another way to send support.

“There’d been a connection in the past between a couple of firefighters in New York and Riverview fire station and they did allude to the point that they liked the maple syrup,” he says.

He says the crew got in touch with a New Brunswick-based maple syrup company, which gave them a deal on the product.

They put together packages of maple syrup, maple sugar, maple cream with a relevant recipe included, hoping to get them to the families of firefighters who died at ground zero.

That December, Robertson and a few coworkers travelled to NYC and hand-delivered the packages.

He says, even three months after the attack, it was a sombre scene.

“The closer you got to Ground Zero, the quieter it got. … It was unbelievable.”

He says the crew will pause to reflect on the day, but there hasn’t been one since untouched by the tragedy.

“We were always strong as a group but this just really did pull us together,” Robertson says.

“These kinds of incidents tend to do that to people.”