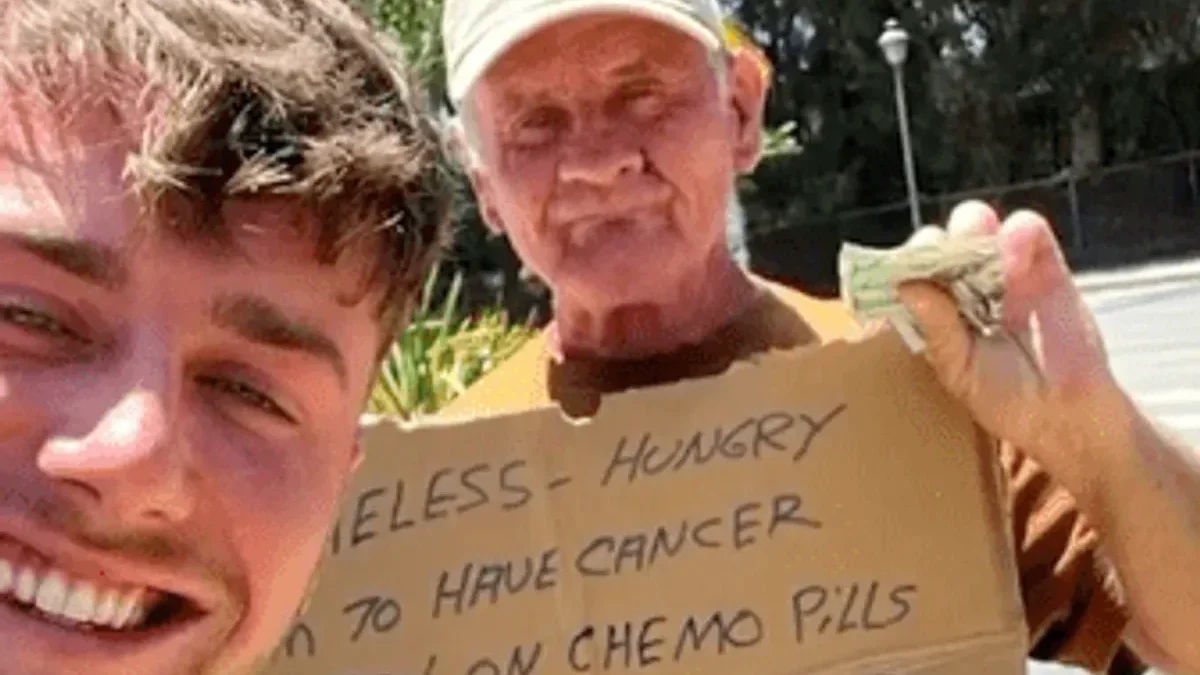 Loneliness is never an easy feeling, especially if you know you’re dying. Yet, that was exactly the situation a homeless man found himself in last year after he learned he had skin cancer.

But thanks to a chance encounter with a reality star, this man’s loneliness took an unexpected turn.

Some people may recognize Harry Jowsey from the Netflix reality series Too Hot to Handle. The show houses good-looking single people at a temptation-filled resort where they aren’t allowed to engage in any sexual activity. If they do, they lose some of their prize money. The whole point is to try and help contestants develop more meaningful relationships in life.

RELATED: Stranger Asks Homeless Man to Live With Her – Then, She Takes It One Step Further by Doing This

It seems as though the show may have worked for Jowsey, because when he saw a homeless man named Eddie with skin cancer, he stopped to have a conversation with him. He discovered Eddie’s medical issues and learned the chemo pills he was taking made him very sick.

“What is your biggest dream?” Jowsey asked Eddie.

“I don’t want to die alone… not dying on the streets, seriously,” Eddie responded.

Right then and there, Jowsey decided he was going to help. He checked Eddie into a hotel for two weeks and got to work.

Fighting for a Cause

Jowsey shared Eddie’s story on Instagram, where he has more than four million followers. In his post, he explained how he called up the people at Dream Machine USA. Together they came up with the goal of raising $20,000.

“I gave Eddie some money, took him to a motel and got him a room there for two weeks. But I want to help get Eddie off the streets permanently,” Jowsey wrote in the caption of his Instagram video. “Together we’re going to make Eddie’s dream come true.”

RELATED: Starbucks Barista Asks a Homeless Man Eating His Meal to Leave – But a Stranger Didn’t Allow This to Happen

The reality star also shared the story on TikTok, where he attracted even more eyeballs to Eddie’s plight. Some celebs, like Marshmello, also donated, and before they knew it, they had reached their lucrative goal with many strangers pitching in to help.

“[Eddie] got himself a motor home and is living by the ocean now,” Jowsey later updated followers. He also shared the video in which they presented Eddie the check, which left him speechless and in tears.

“Just you guys being here is worth more than money,” a grateful Eddie said.

Everyone Has a Story

You never really know what someone is going through, and Jowsey reminded us all of that when he shared Eddie’s story far and wide. How many people probably walked past the man asking for food and water without wondering what his deal was?

And for that matter, how many people had Jowsey pegged as just a “self-centered hot guy” after watching him on Too Hot to Handle, only to be surprised by his actions in this situation?

At the end of the day, everyone has a story, but leaning into preconceived notions or stereotypes won’t unravel them. What does help is asking questions and taking the time to get to know someone before judging them.

RELATED: Man Notices Homeless Grandmother Sleeping in the Dirt Every Night – So, He Builds Her a House

While the money raised helped Eddie find lodging in a peaceful setting, his more significant wish of not being alone is what spoke to so many people. At the end of the day, no one wants to be alone, but one of the best ways to connect with others is to reach out.

That could be contacting a friend or family member you’ve fallen out of touch with. Or perhaps it’s something as simple as reminding yourself to call a parent or loved one. If you’ve been wondering whether to say hi to the new neighbors, strike up a conversation with your coffee person, or ask the homeless person on the corner what their deal is, now is as good a time as any.

After all, no one knows how much time they have left, but spending it in good company is always comforting.