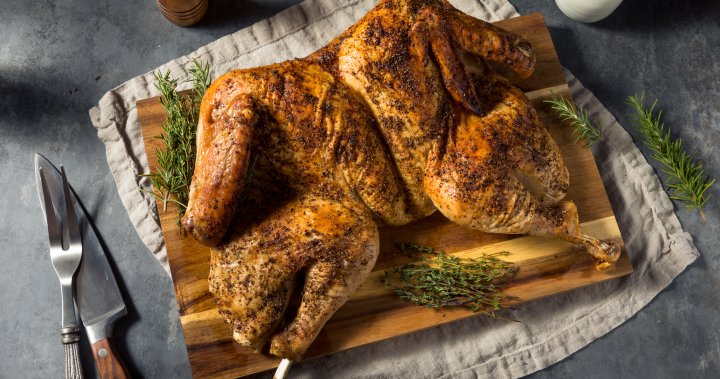 ‘Tis the season for festive meals, but with that also comes the risk of improperly cooked and served dishes causing food-borne illnesses.

From not cooking meat properly to leaving foods at room temperature, there are many ways to cause people to spend the holidays in the bathroom — or worse, the hospital.

The Public Health Agency of Canada says about one in eight people get sick each year from contaminated food — either because it was handled by an infected person, cross-contaminated or left at a dangerous temperature for too long.

Symptoms of food poisoning include vomiting, cramps, fever and diarrhea. While most people get over food poisoning, there are rare times when serious side effects can occur.

Pregnant women, seniors, children under five and people with weakened immune systems are at a higher risk for serious side effects.

While salmonella is perhaps the most well-known bacteria, PHAC estimates it accounts for just five per cent of food-borne illnesses each year in Canada.

E. coli and other bacteria may be lurking in your holiday feasts – here’s what to do

Another eight per cent come from Campylobacter — a bacteria primarily associated with poultry — and another 11 per cent from Clostridium perfringens (C. perfringens), which flourishes when cooked foods are left at unsafe temperatures.

According to the U.S. Centers for Disease Control and Prevention, most C. perfringens outbreaks happen in November and December and many are linked to popular holiday foods.

Turkey and other poultry can be sources of food-borne illnesses, but sticking to safety best practices can minimize the risk.

Lynn McMullen, a University of Alberta food microbiologist, said you should never thaw a turkey at room temperature.

The safest way to thaw frozen poultry is in the refrigerator. McMullen will let a turkey thaw for up to a week in the fridge, depending on the size and temperature of the fridge.

It generally takes 24 hours for each 2.5 kg (five pounds) of bird to thaw in the fridge, according to Health Canada.

“The bonus is, it thaws — I know the nasty organisms can’t multiply and grow — plus it’s helping keeping my fridge cold,” McMullen said.

“It helps to save on some energy.”

Health officials, including Health Canada and the Dietitians of Canada, recommend keeping your fridge at 4 C (40 F) or lower. Freezers should be kept at -18 C (0 F).

McMullen uses an old fridge to thaw hers, but people who don’t have the space can also use a cooler and check it regularly to ensure it’s fridge-temperature inside.

Safety tips for buying and storing your fresh food and leftovers

Don’t have several days? The CDC says a turkey can also be thawed safely when submerged in cold water. The water should be changed every half an hour.

You can expect 30 minutes of thawing per pound of turkey, according to poultry giant Butterball. The company operates a Turkey Talk-Line in Canada and the United States every November and December and says it fields more than 100,000 questions.

Once thawed, Health Canada says fresh poultry should be cooked within two to three days.

Busting the cleaning myth: there is no need to wash poultry

If you’re buying your bird fresh, you can skip the stress of calculating the thaw time. But what about cleaning?

McMullen said in Canada, there is no need to wash your poultry before cooking because that is done by the processor right before it is packaged.

In fact, washing your turkey can lead to food-borne illnesses.

“When you take it out of the package and you put it in your sink and wash it, what you actually end up doing is spreading any contamination that might be on it in your kitchen.

“It increases the risk that you’ll contaminate something else that you might eat without cooking.”

The CDC also advises against washing.

“Old recipes and family cooking traditions may tempt you to keep this practice going, but it can make you and your family sick,” the U.S. government agency said.

Why health officials are telling consumers to stop washing chicken

McMullen said any bacteria that is on the surface of the raw meat will be killed when it gets cooked.

Always wash your hands before and after you touch raw poultry.

Use separate, dedicated cutting boards and utensils for raw meat and produce to avoid cross-contamination or make sure to thoroughly scrub them with dish soap and bleach after being in touch with raw meat.

Cooking your turkey safely — but not overdoing it

So your turkey is thawed, brined or seasoned how you want it, and now it’s time to cook. How do you determine how long to cook it and what temperature it’s done at?

Recipes vary and how long to cook a bird is affected by preparation.

A whole turkey that is filled with stuffing is going to take much longer to cook than a bird that has been spatchcocked: a process in which the backbone is removed and the meat laid flat to even out cooking time between different cuts of meat.

According to both Health Canada and the United States Department of Agriculture, turkey should be cooked to an internal temperature of 74°C (165°F).

While some people will rely on visual cues such as colour, firmness and time — McMullen said the bird can be fully cooked and still be a little bit pink — the only real way to tell doneness is by using a food thermometer.

It should be inserted into the thickest part of the breast or thigh, not touching any bone.

The problem some food-lovers have identified is, what is strictly food safe isn’t always what is tasty.

American chef and bestselling food writer J. Kenji López-Alt explains in his book The Food Lab: Better Home Cooking Through Science, that by removing the backbone and flattening it out, you not only get more even cooking — but you also get juicier meat and crisper skin, and as much as a 50 per cent faster cooking time.

The issue, he says, is leg meat needs to be cooked to around 165 F to be palatable, while breast meat dries out when it gets much above 145 to 150 F.

When the bird is laid flat on a baking sheet, the dark meat is closer to the hot air circulating around the edge of the sheet, meaning it will cook at a more even rate as the white meat in the middle.

“With a spatchcocked bird, your breast and legs will naturally reach the ideal final temperature at the same time,” he writes.

Cooks using this method should use a baking sheet or shallow roasting pan, López-Alt argues, as a vessel with high sides will hinder good air circulation that is important to even cooking.

Those set on stuffing need to be even more aware of the safety risks.

The CDC says it is safest to cook stuffing in a casserole dish instead of inside your turkey.

Even if the turkey itself has reached the safe minimum internal temperature of 165 F as measured in the innermost part of the thigh, the wing and the thickest part of the breast, the stuffing may not have reached a temperature high enough to destroy bacteria that may be present.

The USDA said bacteria can survive in stuffing that has not reached 165 F, possibly resulting in food-borne illness. Health Canada also said because stuffing is moist and slow to heat up and cool down, it’s the ideal place for bacteria to grow.

Your chicken might be undercooked — even if it’s not pink inside: study

Stuffing the turkey means hot air can’t circulate inside the cavity, increasing the time needed to safety cook all ingredients.

It also means by the time the stuffing comes up to safe temperature, the white meat will be overcooked and dry. And basting won’t help: science has shown the method doesn’t do much for keeping the meat moist.

If you insist on a stuffed turkey, put the filler in just before cooking. Food expert Alton Brown also advises making sure the stuffing is hot, so it doesn’t cool down to a dangerous temperature range during the cooking process.

1:12
Cranberry, sausage and apple stuffing for your next dinner party


How long can you keep the leftovers?

The food safety doesn’t stop once the meal is consumed: neglecting your leftovers can mean nausea, vomiting, diarrhea, and sometimes even fever or chills.

The key is putting the food away quickly, even if it is still hot. The same goes for appetizers like charcuterie platters, dips and desserts.

“I always tell people two hours, don’t leave it longer, because there are some organisms that will multiply really, really fast and they can make you sick,” McMullen said.

How long will that turkey last? Can you refreeze food? Two experts answer all your holiday leftover questions

Generally, most leftovers will last about three days, Toni D’Ettorre, a supervisor for safe food and water at Ottawa Public Health, told Global News in a previous story.

Both the USDA and Health Canada say cooked meats, poultry, egg, fish and vegetable dishes will last three to four days in the fridge.

If you’ve stored the food properly and it’s been less than three days, you should be fine to eat it cold — after that, food experts say heating is safer as recooking the food should kill bacteria that’s been growing in it.

And public health agencies like to say — when in doubt, throw it out.

Do Canadians know enough about food safety? Survey says no

All the Things I Didn’t Tell the Men I Dated Because I Was Afraid
It Takes One Person To Make You Feel Like You Matter | Kyle Scheele Inspirational Speech | Goalcast
Why I Didn’t Trust Myself to Make Decisions (and What If It’s All Okay?)
He Was Fatally Beaten by Memphis Police — Now People Around the World Are Sharing #SunsetsForTyre in His Honor
How to Show Up When Nothing About Your Life Is Perfect