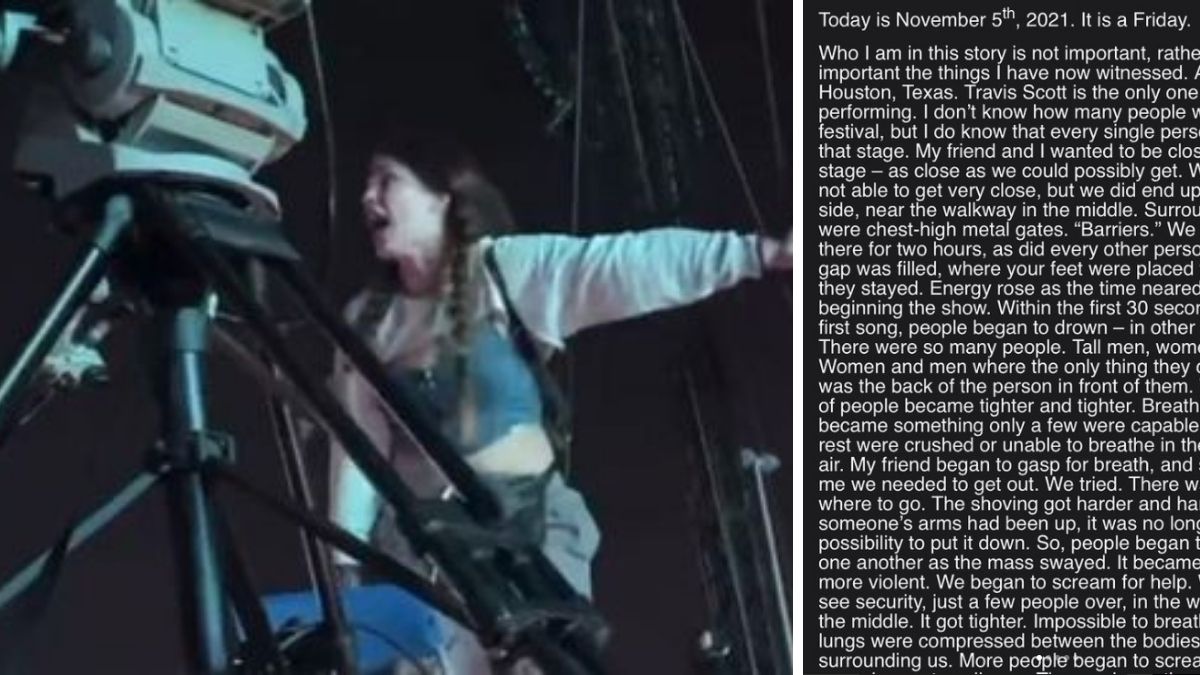 It’s been a long time since many of us have been able to attend a live music event. The pandemic put a hard stop to all group activities – especially those involving large crowds. It’s fair to say that the gradual re-introduction of live shows has been a source of joy for many.

But recently one live music event became memorable for the wrong reasons, as tragedy took over. On November 5th, fans of the rapper Travis Scott were looking forward to an amazing evening – but ended up stuck in a deadly stampede instead. As the crowd gradually became more and more agitated, concertgoers fell victim to trampling, suffering dangerous injuries while the show kept going. It appeared no help was coming –at least, not from the people in charge.

“Stop the show” and the staff did nothing. This shit is fucking heartbreaking #AstroWorld vc:@JanthonyOlivera pic.twitter.com/5vVZKLKV7h

One concertgoer, Seanna Faith McCarty, noticed the chaos unleashing. Stuck in the midst of the crowd, she quickly realized things were becoming dangerous. In a poignant Instagram post, she describes her frightening experience at the festival, describing “sinkholes of people.”

“There were so many people. Tall men, women. Women and men where the only thing they could see was the back of the person in front of them,” she recounts. “The rush of people became tighter and tighter. Breathing became something only a few were capable of. The rest were crushed or unable to breathe in the thick, hot air. My friend began to gasp for breath, and she told me we needed to get out. We tried. There was nowhere to go. The shoving got harder and harder. If someone’s arms had been up, it was no longer a possibility to put it down. So, people began to choke one another as the mass swayed. It became more and more violent.”

But no matter how much people pleaded, Travis Scott went on with the show, seemingly not seeing nor hearing the distressed crowd.

Within 30 seconds of the first song, people began to drown—in other people.

She jumped into action

McCarty shares how she ended up on the camera platform. Thanks to a man who pulled her back when she lost her balance, she was able to move towards the back of the crowd and eventually hop over a guardrail. From there, she noticed the platform where the cameraman stood and knew she had to take a chance.

She climbed the ladder and begged a cameraman to stop the show. Another concert-goer, who was ID’d on on Twitter as Ayden Cruz, also joined her to get the cameraman’s attention. According to McCarty, the cameraman called another person. She then tried explaining the situation to them. Still, no action was taken.

Not letting herself be defeated, she climbed back down and hid under the platform to call 911. Eventually, McCarty happened upon two men in medical shirts who appeared to be confused about the mayhem. With the help of two other girls, she led them back to the pit of fallen and injured concertgoers.

“Those were the only ones working that were brave that night,” McCarty said. “I had endless respect for those two men. We waited, the two girls and I, and watched people being thrown over the railing, people trying to escape the cage we had been in.”

Heroes are found in the most unlikely places

Thankfully, McCarty made it out of the festival without major injuries. While it would have been very tempting to flee towards safety, she decided to see it through and make sure help would reach the ones in need. As of now, 9 people tragically lost their lives as a result of the stampede that occurred that night. Investigations are currently underway to figure out what lead to the disastrous events. Hopefully, something productive will come out of this tragedy, so that it is never allowed to happen again.

courage is found in unlikely places

It Takes One Person To Make You Feel Like You Matter | Kyle Scheele Inspirational Speech | Goalcast
The Choice We All Have , But Only a Few Apply It | Joe Dispenza
How to Show Up When Nothing About Your Life Is Perfect
How to Un-Stub Your Toe on the Nail of Life | Eric Bailey Motivational Speech | Goalcast
Domino’s Employee Delivers a $12 Order – But the Unusual Tip He Received in Return Takes Him by Surprise