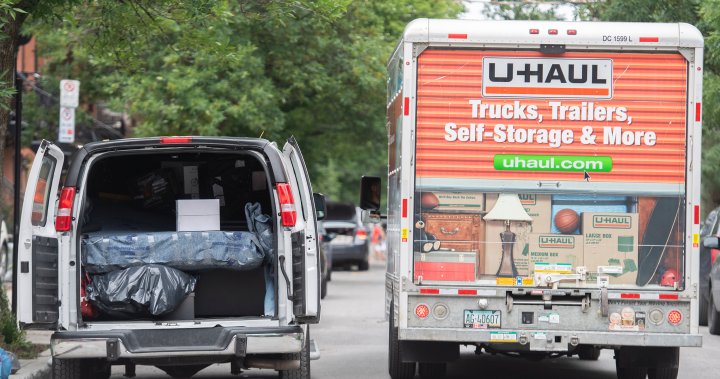 Almost 10,000 more people moved into Alberta from other parts of Canada in the second quarter of 2022 than vice versa, according to a Statistics Canada analysis released by ATB Financial on Thursday.

It was the largest net gain since the second quarter of 2014 and the fourth quarter in a row in which Alberta’s population grew as a result of interprovincial migration, Rob Roach with ATB Economics reported.

University of Calgary economics professor Trevor Tombe pointed out the inflow was dominated by young people in their 20s and 30s.

Blake Shaffer, an assistant economics professor at the U of C, shared a breakdown of Alberta’s population change going back to 1971.

It highlights the interprovincial population boom the province experienced in the early 2000s due to high oil prices, an abundance of jobs and overall strong economy.

Then, the trend reversed and there was an outflow of young people in recent years. Now, people are beginning to move to Alberta again.

Components of population growth in Alberta, quarterly, going back to 1971. pic.twitter.com/gi9CMmzwYQ

The province’s relatively affordable housing market is expected to help attract and keep young people. Although prices have risen, they’re nowhere near the astronomical growth seen in some Ontario and British Columbia markets.

The Alberta government said so far in 2022, the province has welcomed 15,208 people and over the past four quarters, 23,132 moved to the province from across the country.

“I really think what’s drawing people in is all that Alberta has to offer, from well-paying jobs to affordable homes to low taxes, and still the only province without a provincial sales tax — and then a high quality of living,” Jobs, Economy and Innovation Minister Tanya Fir said on Thursday.

Banff feeling the pinch of worker shortage: ‘They have not come back’

Fir also noted Alberta is hiring — and not just in the areas the province is typically known for.

“Not just in our traditional industries like oil and gas and tourism and agriculture and forestry, but we are seeing levels of diversification in Alberta like I’ve never seen in my lifetime,” she said.

“Emerging and growing fields like film and television, technology, aerospace and aviation, pharmaceuticals, manufacturing — so such a wide variety of of jobs that can bring people to the province regardless of their background.”

Fir said while Edmonton and Calgary are, perhaps not surprisingly, seeing an influx of new residents, there are jobs available across the province needing to be filled.

“Depending on where their skill set is or what industry they’re in, that’s the beauty of it as well — there are jobs from north to south, rural, urban, small towns, big towns,” she said.

“It’s not just one particular area.”

When it comes to people moving between provinces, the Statistics Canada numbers show Alberta posted the largest gain. Meanwhile, Ontario lost the most residents with a net outflow of 21,008 residents in the second quarter.

Ontario was also the main contributor to Alberta’s net gain with 6,281 more people moving from Ontario to Alberta than the other way around, the ATB summary said.

“With Alberta’s economy continuing to grow faster than most of the other provinces, positive net interprovincial migration is likely to continue over the second half of the year and into 2023,” Roach added.

Earlier this year, the province launched a large advertising campaign targeting skilled workers in Vancouver and Toronto, but both Fir and Tombe noted the “Alberta is Calling” campaign started after June 30, which is when the Q2 data ended.

“So I think the campaign is just going to continue to grow those numbers as we see more and more people come to Alberta where, again, they can have a well-paying job, afford a home, and be able to to have such a beautiful province with so many amenities so close to them,” Fir said.

1:19
Phase 2 of the ‘Alberta is Calling’ campaign launches in Vancouver, Toronto

Phase 2 of the ‘Alberta is Calling’ campaign launches in Vancouver, Toronto – Sep 21, 2022

Grieving Mother Honors the Memory of Her Young Daughter With a Gift to a Stranger – The Note She Writes Moves an Entire Toy Store to Tears
Hard Times eBook Sale: Buy One, Give One (This Weekend Only!)
This Is Why You SUCK At Love | Adam Roa Speech | Goalcast
I Cheated on Him with My Higher Self (and We’re Still Going Strong)
Kind Stranger Pays for a Young Mother’s Pancakes – She Doesn’t Realize The Impact of Her Deed