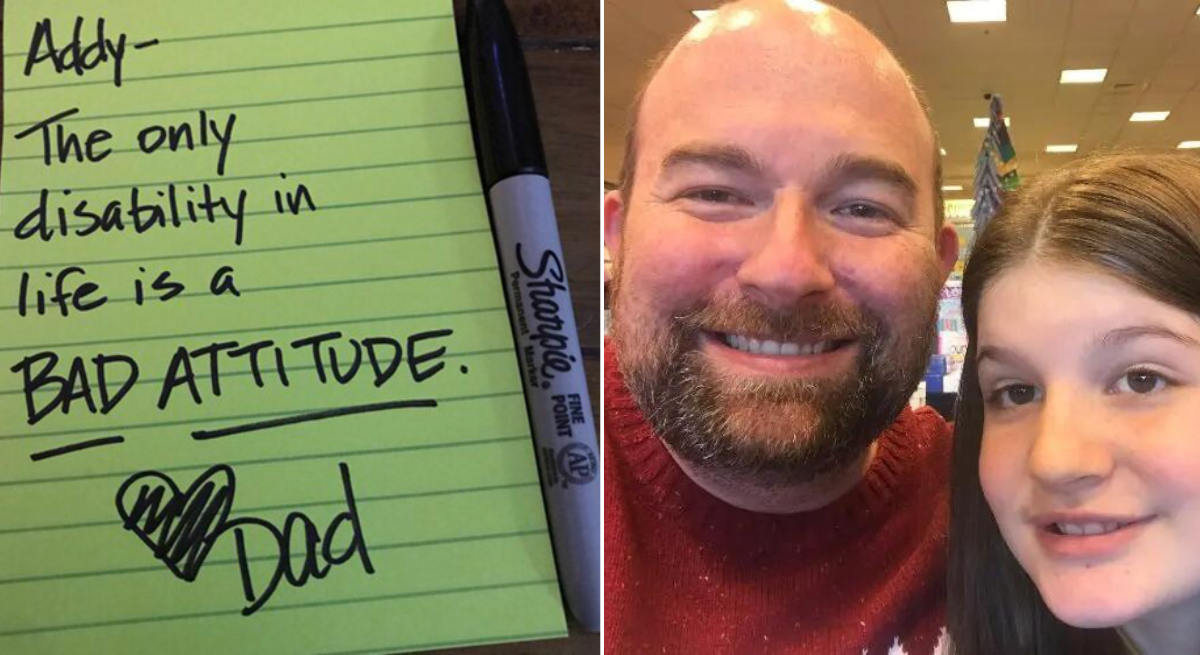 A notepad and a black marker are the tools of the trade for Chris Yandle, a father in Mandeville, Louisiana, who takes his role very seriously. When his daughter Addison was nervous about being the new kid at school, Yandle felt somewhat guilty. It was because of his day job in college athletics that the family had had to move around so often. In Mandeville, Addison was getting ready to start her fourth school in five years.

So, on the first day of school, Yandle grabbed a piece of lined paper and a black Sharpie marker and wrote, “Be nice to others. Not everyone will look like you. Learn to spot the unique and special things in other people. You have the power to change someone’s life.” His simple note was not only a piece of advice; it also put Addison in the driver’s seat, letting her know the power she had to make change in her day. Although it was a new school, she didn’t have to be a passive observer in the classroom. She could actively participate in making her day better.

A Father Goes Above and Beyond

Many parents put little notes of encouragement in their children’s backpacks and lunch boxes. They let the child know that their mom or dad are thinking about them. It can put a smile on their child’s face and help them get through an otherwise long day. But Yandle took it to the next level. Without anything like a long-term plan, Yandle decided to write another the note the next day. The following day, he had something else to say and penned another note. And so it continued, day after day. Yandle made writing the notes to his daughter part of his morning routine, and Addison looked forward to receiving one every day. Before they knew it, Yandle had composed nearly 700 notes full of words of wisdom to his daughter!

RELATED: The Growth Mindset: 10 Steps To Move Past Limitations And Fulfill Your Potential

Yandle wrote about life hacks and growth mindset. He wrote about being kind to others. He wrote about doing one’s best and contributing to the world. His notes include things like “We make our choices. Then, our choices make us,” and “Don’t invalidate someone simply because they don’t agree with you.” Another note slyly encouraged the preteen: “Be teachable. You are not always right.” Always written with love and often humor, the notes encouraged Yandle’s daughter to be the best person she could be and to grab life by the horns. Over the months and then years, Yandle found that the notes were not only life-changing for his daughter, but also for him.

Addison, now a self-confident teenager, grew tremendously with her dad’s daily wisdom guiding her through those rocky years when the family frequently moved. The advice was applicable no matter what school Addison attended, as was the growth mindset that Yandle had helped his daughter cultivate. Knowing she was loved and supported, Addison was able to make friends wherever she went.

Just Wanted to Do His Part as a Dad

“It makes me feel like I’m doing my part as a dad. Seeing how she’s growing up and how well she’s done at school, her mindset, her attitude—if I was able to help her find that confidence and mold that change, then I’ve done my job as a parent,” Yandle said.

He also gathered up all the tidbits of advice that he has given his daughter over the years and put them in one book called Lucky Enough: A Year of a Dad’s Daily Notes of Encouragement and Life Lessons to His Daughter. Parents can also be inspired by the notes he shares on Instagram.

Yandle’s story reminds us that it really is the small things that matter, and that we all have the power to make positive change in someone else’s life.

RELATED: After Battling Food Addiction For Years, She Lost Over 150 Pounds By Adjusting Her Mindset

Four Priorities for Talent Acquisition Leaders in 2023 (i4cp login required)
Beyond Dry January: 5 Benefits of Extending Your Break from Alcohol
Podcast: What to know about “novelty hunting.”
The Choice We All Have , But Only a Few Apply It | Joe Dispenza
How to Un-Stub Your Toe on the Nail of Life | Eric Bailey Motivational Speech | Goalcast