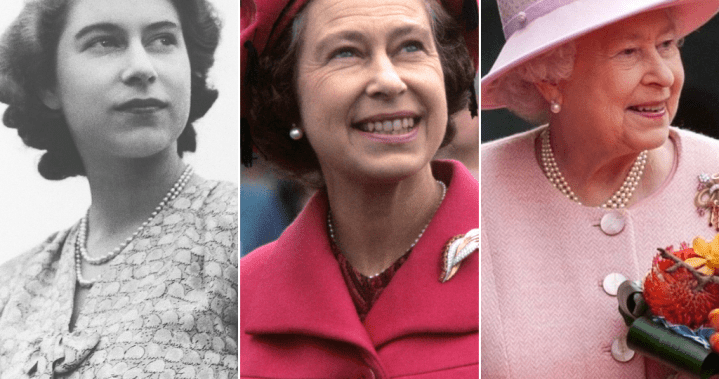 Queen Elizabeth II has died, but her impeccable style and decades of iconic looks will live on forever.

In her 70-year reign as the head of the British Royal Family and ruler of the monarchy, she’s become a fashion icon with an ever-evolving style fit for a queen.

As a young princess who came of age during World War II, the queen often dressed in ways that reflected what was happening in the U.K. at the time, sending a message with her sartorial choices.

For example, Vogue U.K. reports that the queen used ration coupons to purchase the duchesse satin for her 1947 wedding gown — a typical move for war-time brides.

Brides Magazine reports that same dress featured a 15-foot train that was inspired by Botticelli’s “Primavera” Renaissance painting, and was symbolic of a period of growth and rebirth for England following the war.

Queen Elizabeth II: The sweetest, funniest moments from her reign

Her coronation gown was another example of a frock rife with meaning — it featured the floral emblems of many of the Commonwealth nations, including a Canadian maple leaf, an English rose, a Welsh leek, a Scottish thistle, an Irish shamrock, an Australian wattle flower and the fern of New Zealand.

To honour the queen in her passing, take a walk through her fashion evolution and some her best style moments over the years.

As a girl, Queen Elizabeth was often spotted in pleated or smock dresses, knee socks and sensible jewelry typical of young royals, even to this day. According to Marie Claire UK, her father, King George VI, continued Queen Victoria’s tradition of gifting his daughters a pearl each year on their birthday, ensuring a full set by the time they turned 18.

The princess as a young woman was a fan of elegant yet simple dresses, cut in timeless silhouettes.

Her wedding to Prince Philip in 1947 saw her in the aforementioned wedding dress designed by Norman Hartnell — one of a handful of go-to designers the queen would come to trust with creating her custom wardrobe pieces over the years.

In her private life, she continued to wear uncomplicated dresses and overcoats and kept her wardrobe fairly simple.

Hartnell was also tasked with creating the queen’s coronation gown, which took almost a year to complete and required the skill of six embroiderers.

Always cognizant of the criticisms of excess directed toward the Royal Family, the queen was a fan of the royal fashion repeat and took careful steps to rewear items from her closet for public events. She rewore her coronation gown on multiple other occasions, including during speeches to the Parliaments in 1953 and again during a visit to Canada in 1957.

It was also during this time that the queen began to experiment with style as she stepped into the public arena and spent much of her time carrying out her royal duties and patronages.

As the monarch became well-settled into her royal role she paired the extravagant with the everyday. She was often seen in lavish ballroom gowns and intricate tiaras while attending state dinners and galas, but chose scaled-back coordinating sets while on tour.

It was during this time that the queen had a lot of fun with her hats and headgear. The world saw her wear a wide array of millinery, often in fun prints or adorned with faux flowers.

It was after the queen’s Silver Jubilee in 1977 that a palette of block solids and large, playful patterns increasingly became the queen’s go-to ensemble. She was not afraid of colour — she wore almost every hue imaginable in the latter part of her reign — but it became clear that matching skirt and jacket ensembles and colourful coat dresses were her go-to look.

By dressing in solid colours the queen ensured that she was immediately recognizable at every event, even from afar.

These outfits became an unofficial “uniform” for the queen and it wasn’t unheard of for British bookmakers to take bets on what colour the queen would don for high-profile events.

Still, the queen kept things simple, dignified and diplomatic by choosing brooches from her vast collection, or including subtle dress details that held meaning for the various organizations and countries she visited.

She also was often seen with the same black handbag on her arm and classic, low-slung pumps.

As she aged, Queen Elizabeth began to assign more royal duties to her children and grandchildren and attended fewer events. However, she was always a masterclass in royal style, showing up to regal events in the classiest of formalwear.

6:43
Look at Queen’s impact on Canada

Look at Queen’s impact on Canada

How to Be Intolerant of Dysfunction | Josh Shipp | Goalcast
The Walt Disney Company to mark 100th anniversary with new experiences
The Choice We All Have , But Only a Few Apply It | Joe Dispenza
The two kinds of productivity advice
‘Gen Z yellow’: Next ‘it’ colour or marketing ploy?