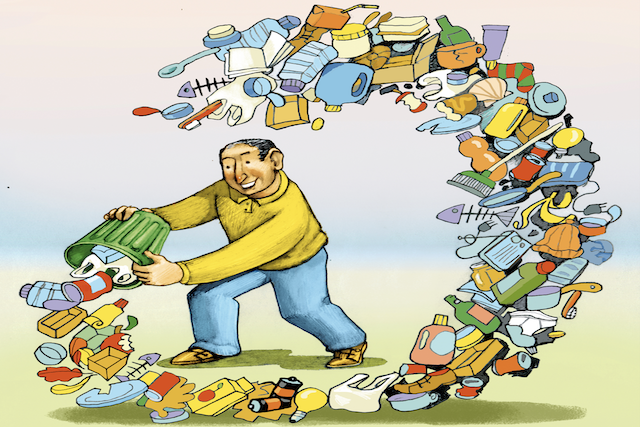 “Not what we have but what we enjoy constitutes our abundance.” ~Epicurus

Minimalism is the lifestyle of removing the clutter from one’s life to make room for meaningful living. This can be in the form of paring down the stuff one already owns, forging new consumption habits to reduce the inflow of new clutter into one’s life, or some combination of the two.

As a mental health therapist, I’ve had clients in my practice from ages seventeen to seventy mention it in session over the years. Clearly, it has tapped into a zeitgeist. In an increasingly complex world, minimalism has a refreshingly simple mission: Get rid of distractions, find more meaning.

But the promise may have exceeded the potential: the world appears to be moving on from minimalism. A recent article on the newer maximalism trend has caused me to reflect on minimalism’s time in the sun, and popular culture’s apparent transition from the one to the other.

Like many, when I learned about minimalism, I was inspired to do a round of decluttering one weekend afternoon. I gathered several bags of clothes, a handful of electronics, and a box of appliances and donated them to my local thrift store.

It felt good. Like, really good. I felt lighter, freer, and generous.

The afterglow remained through the day. By the next morning, however, it had left. No problem, I thought—I’ll just unload some more stuff. I made a sweep through my house and toted another load down to the thrift store. Happiness: restored.

I thought this time I had finally minimized my way to contentment.

I hadn’t. The next day, the afterglow faded again. My eyes darted around the living room—what else can I get rid of? That’s when it hit me: this was basically retail therapy . . . just, in reverse.

Retail therapy, or acquiring stuff to make oneself feel better, is old shoe. But selling/donating/trashing old shoes to feel better had a considerably fresher appeal.

As I continued to learn about the minimalism lifestyle—this trend of getting rid of unnecessary stuff to live a better life—it seemed to me that it was often hyper-focused on the first part of its mission (getting rid of stuff) and not so much the second part (living a better life).

Maybe that’s because the first part deals in the tangible, and the second part the intangible. We can count the number of shirts in our closets, but we can’t put a number on what a better life looks like. It’s a highly personal question that will be different for everyone.

Nevertheless, I began to wonder whether these two parts—minimizing clutter and building a meaningful life, had any relation whatsoever.

Minimalism and meaning-building may be an altogether spurious relationship, or a relationship that seems to exist, but doesn’t.

A famous example of a spurious relationship is that between crime rates and ice cream sales: both increase and decrease at the same time of year. Therefore, we may conclude that one causes the other. But the consumption of ice cream does not lead to criminal behavior or vice versa. In reality, both are caused by an increase in temperature.

Unfortunately, scientific studies on the relationship between minimalism (or maximalism) and meaning-building are scarce, so we are left with anecdotal evidence.

One phenomenon that we do have scientific backing for is that of the hedonic treadmill, and I believe the hidden pitfalls of both minimalism and maximalism can be found here.

A classic 1978 study of this phenomenon by Brickman, Coates, and Janoff-Bulman found that lottery winners and paraplegics both reported feeling ‘back to normal’ again a few months after their relative change. No matter what seems to happen in our lives, our happiness seems to revert to its baseline. Various measures of subjective well-being tend to place the worldwide average somewhere around a 6.7 out of 10.

The hedonic treadmill also explains why my good feelings from decluttering didn’t last longer than a day or two.

Being inspired by minimalism for a weekend was fun. But just like any other fun weekend, I’m not sure it better equipped me to face the week ahead. Others may certainly have different opinions and experiences, but for me, decluttering did no more for me than if I had gone out and bought a bunch of stuff instead of getting rid of it. Stuff, or at least my stuff, isn’t imbued with meaning, whether I’m moving it in or out of my living space.

With minimalism’s blank white walls being replaced with bric-a-brac covered antiques of the maximalist trend—including the dark academia subculture, among others—I suspect it is only a matter of time before many of its adherents realize the same, either consciously or subconsciously: stockpiling antiques and leather-bound books will not make one inherently wiser or more cultured.

This takes us full circle to the Epicurus quote at the top of this article—it is not what we have but what we do that determines our life satisfaction.

Unburdening ourselves from the tedium of cleaning and caring for items we don’t actually value, and from consumer habits that leave us unfulfilled, can create the potential to focus on more important things in life, but it won’t do the work for us of actualizing that potential.

Similarly, maximizing our homes with lovely objects may provide an inspirational foundation for self-improvement, but change is a grueling process that requires a deep store of internal motivation. At some point, engineering our environment offers diminishing returns if the goal is internal change.

To live meaningfully, we have to make the commitment to build and nurture intimate relationships, engage in purposeful activity whether professionally or off the clock, and maintain healthy lifestyle habits so that we have energy for these pursuits. Stuff, and the time we devote to it, can be a barrier to these things, but removing barriers in and of itself isn’t a solution.

My experiment with minimalism caused me to reaffirm my commitment to these dusty old standbys.

For me, a meaningful life consists of enjoying the outdoors with family and friends, mining my own experiences and the works of others for insight into the human condition, and continually working to improve my skills as a therapist so that I can better help my clients fulfill their own visions for meaningful living.

To provide the foundation for these pursuits, I strive to eat a diet rich with whole foods, exercise (in some form) about thirty minutes a day, and carve out eight hours for sleep each night.

That’s pretty much my road map. Like everyone, I am frequently bombarded with ideas that present themselves as the solution to my problems. Often, I let these ideas pass me by, but occasionally I take one out for a test drive. Afterward, I usually find I’m back in the same place I started, and then remind myself that so much that is branded as a shortcut to a meaningful life is actually a roundabout.

Domino’s Employee Delivers a $12 Order – But the Unusual Tip He Received in Return Takes Him by Surprise
The Rise of RockyNoHands | The Gamer Who Can Beat You At FortNite With His Mouth | #goalcast
I Have 2 Questions For You (Motivational Video) Fearless Motivation
All the Things I Didn’t Tell the Men I Dated Because I Was Afraid
Femcels: Inside the enigmatic subculture of involuntary celibate women